Iran calls for US to unfreeze Afghan funds amid humanitarian crisis 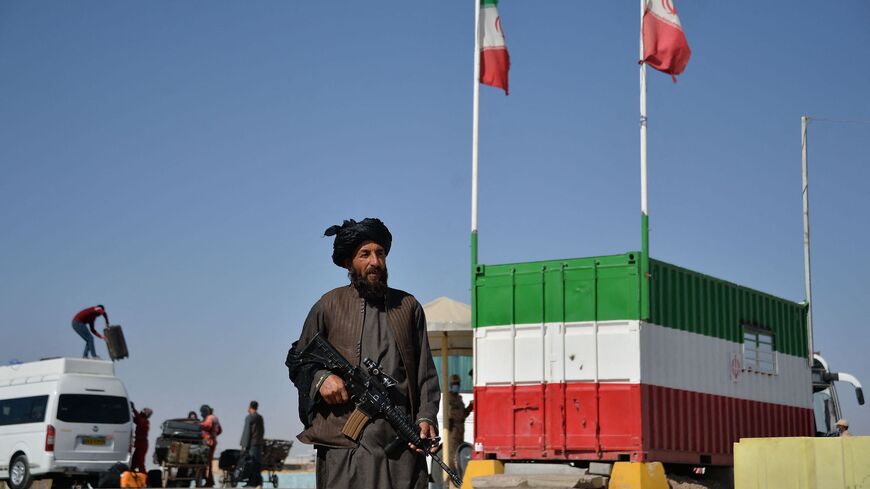 In this picture taken Oct. 19, 2021, a Taliban fighter stands guard at the Islam Qala border between Iran and Afghanistan. - HOSHANG HASHIMI/AFP via Getty Images

Iran called for the United States to release Afghanistan’s frozen funds, but said it is not ready to recognize the Taliban-led government following high-level talks between the Islamist group and Iranian officials.

Taliban Foreign Minister Amir Khan Muttaqi visited Tehran over the weekend for talks a spokesperson said would focus on “political, economic, transit and refugee issues between Afghanistan and Iran.”

Iran shares a 900-kilometer (560-mile) border with Afghanistan and hosts some 3.6 million Afghan refugees. Since the Taliban’s takeover in August, hundreds of thousands of Afghan civilians have escaped into neighboring Iran using informal border crossings.

On Monday, Iranian Foreign Ministry spokesperson Saeed Khatibzadeh described the talks as “positive,” but said Iran is “not at the point of officially recognizing” Afghanistan’s new leaders.

“The current condition of Afghanistan is a major concern for the Islamic Republic of Iran and the visit of the Afghan delegation was within the framework of these concerns,” Khatibzadeh said in a press conference on Monday, according to Al Jazeera.

At the invitation of Iran, a senior delegation led by the Foreign Minister Mawlawi Amir Khan Muttaqi left for Iran today. pic.twitter.com/hroHIlbZfO

No country has offered official recognition to Taliban, which in September unveiled an all-male cabinet that includes a US-designated terrorist and is dominated by ethnic Pashtuns. Last week, Iran's ambassador to Kabul, Bahador Aminian, told TOLOnews that Iran will only recognize an “inclusive” government formed by the Taliban.

Shiite Iran did not recognize the Sunni movement when it was last in power from 1996 to 2001, during which the Taliban violently oppressed Afghanistan’s Shiite Hazaras and other ethnic minorities. The Taliban’s execution of at least eight Iranian diplomats and a journalist in the northern Afghan city of Mazar-e-Sharif in 1998 brought Iran and the Taliban to the brink of war.

Iran, however, has pledged to work with Afghanistan’s new Taliban leaders despite their historically rocky relationship.  Iranian President Ebrahim Raisi has described the United States’ “military defeat" in Afghanistan as an opportunity for peace.

During the talks in Tehran, Iran Foreign Minister Hossein Amir-Abdollahian pledged humanitarian support for Afghanistan and called for the release of the Afghan government’s financial assets, which the Biden administration froze in August.

"The assets of Afghanistan blocked by America … should be used for humanitarian purposes and improvement of the living conditions in Afghanistan," Amir-Abdollahian said.

During his visit to Iran, the Taliban’s foreign minister also met with exiled resistance leaders Ahmad Massoud and Ismail Khan and “assured them that anyone can come to Afghanistan and live without any concerns.”

“It's home to all, and we do not create insecurity or other problems for anyone. Everyone can come freely and live,” Muttaqi said in a video posted to Twitter Monday.