The US withdrawal and return of the Taliban has shaken up relationships in the Gulf and South Asia. 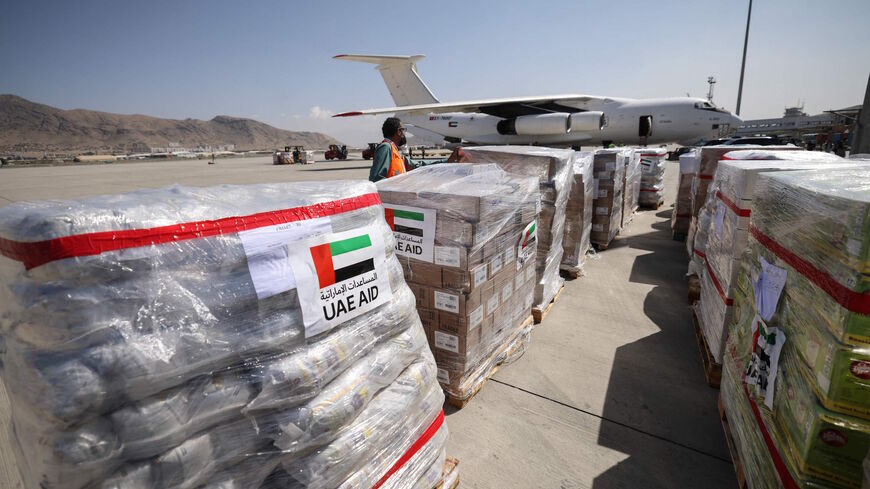 Medical aid arrived from the United Arab Emirates is pictured at the airport in Kabul on Sept. 15, 2021. - KARIM SAHIB/AFP via Getty Images

Although the Afghanistan crisis has given the UAE an opportunity to shore up its partnerships with key Western allies, Abu Dhabi views the Taliban takeover with caution and concern. The chaos that accompanied the US withdrawal from Afghanistan has alarmed friends and allies about Washington’s reliability as a security partner.

Abdulkhaleq Abdulla, a prominent Dubai-based political scientist, told Al-Monitor that the US withdrawal has created a “trust deficit in the US president, US intelligence estimates and US security protection. Overall trust in the US is at its lowest.” The UAE is also concerned by security threats emanating from the Taliban takeover of Afghanistan. Abdulla said, “The Taliban victory has energized jihadist groups all over the region. It is a major concern. Regional powers need to be diligent and on the watch all the time for this development emanating from Afghanistan.”

Beyond these immediate security risks, the UAE faces an intense geopolitical scrum in Afghanistan. As Qatar’s Foreign Minister Sheikh Mohammed bin Abdulrahman al-Thani was the first top diplomat to visit Taliban-controlled Afghanistan and Doha has been an outspoken proponent of constructive engagement with the Taliban, it has a stronger diplomatic foothold in Afghanistan than the UAE. Former Afghan Ambassador to Canada and France Omar Samad believes that the Gulf monarchies are engaged in a three-way competition for influence in Afghanistan. Samad told Al-Monitor, “Qatar has the advantage of having hosted intra-Afghan talks while the UAE is now hosting former President Ghani and the Saudis are adopting a wait-and-see attitude.”

To mitigate security risks and strengthen its competitive position, the UAE could opt for pragmatic engagement with the Taliban. Former Minister of State for Foreign Affairs Anwar Gargash’s praise of Taliban spokesman Zabiullah Mujahid’s “emphasis on amnesty and tolerance over revenge,” as well as support for women’s education and participation in the workforce, points to this approach. Engagement with the Taliban would also align with the UAE’s past policies toward Afghanistan.

Although Mohammed bin Zayed reportedly described the Taliban as “backward, bearded bad guys” during his January 2019 meeting with then-US Secretary of State Mike Pompeo, the UAE had previously competed with Qatar to host a Taliban office and was one of only three countries to maintain diplomatic relations with the Taliban regime from 1996 to 2001.

While formal diplomatic recognition of the Islamic Emirate is unlikely, Afghanistan’s Ambassador to the UAE Javid Ahmad believes that Abu Dhabi could pursue a phased approach to engagement with the Taliban. Ahmad told Al-Monitor, “The UAE often takes a quite diversified policy approach in its engagements, including in Afghanistan. My view is that they would continue with humanitarian assistance to build a closer, neutral partnership with the Taliban. Later, this support will likely be adjusted once there is more clarity about not only Qatar’s future role in the country, but also and importantly, the Taliban’s own policy positions.” Ahmad also noted that the UAE’s “early outreach” to the new authorities in Kabul could strengthen its bargaining position with the Taliban.

Looking ahead, the UAE is likely to pursue three strategic objectives in Afghanistan. First, the UAE will continue to leverage the Afghan crisis to highlight its indispensability as a partner to Western countries. The UAE’s acceptance of Afghan pilots from Uzbekistan, following a US-brokered deal, underscored its willingness to aid US policies even at the expense of normalizing relations with Kabul. France has also turned to the UAE for help during the Afghan evacuation crisis, with Foreign Minister Jean-Yves le Drian and Defense Minister Florence Parly visiting al-Dhafra airbase on Aug. 23. These gestures will also counter the international community’s growing reliance on Qatar and Turkey for securing Kabul airport.

Second, the UAE can leverage the Afghanistan crisis to bolster its standing as a humanitarian aid donor. The UAE began dispatching urgent humanitarian assistance to Afghanistan on Sept. 4, pledged $50 million in donations at the Sept. 13 UN conference and has established an aid air bridge to Kabul. Beyond bolstering Emirati soft power, these aid donations could have far-reaching diplomatic implications. Abdulkhaleq Abdulla believes that the UAE’s standing at “the forefront” of sending urgent humanitarian aid is “going to be the UAE’s way to reach out to the Taliban.” The completion of a joint Israel-UAE aid mission, which rescued 40 at-risk women from Kabul, will add a humanitarian dimension to the Abraham Accords.

Third, the Taliban takeover provides the UAE with an opening to strengthen its partnerships with India and Pakistan. South Asia’s importance as a vector in the UAE’s foreign policy strategy was underscored by Abu Dhabi’s April 2021 efforts to facilitate India-Pakistan dialogue over Kashmir. As India and the UAE are both concerned by the potential creation of a Turkey-Qatar-Pakistan nexus in Afghanistan, they could have find common ground in Afghanistan.

The UAE has also closely engaged with Pakistan on Afghanistan. On Sept. 15, UAE Foreign Minister Abdullah bin Zayed and his Pakistani counterpart Shah Mahmood Qureshi held talks on defusing an impending humanitarian crisis in Afghanistan. However, there is a split opinion in Pakistan on the UAE’s effectiveness as a partner in Afghanistan. Pakistani diplomatic sources told Al-Monitor that the UAE has not been a major player in Afghanistan, as most of its initiatives have been Saudi or US led. Umar Karim, a fellow at the King Faisal Center for Research and Islamic Studies and visiting fellow at RUSI, told Al-Monitor, that Pakistan serves as the only viable channel of communication and influence over the Taliban. As the UAE is unwilling to be a permanent spectator in Afghanistan, Karim stated, “There is a possibility of cooperation and convergence between the UAE and Pakistan on the Afghan file.”

One month after the Taliban’s surprise seizure of Kabul, the UAE is still trying to devise a long-term strategy in Afghanistan. Despite its alarm at the Islamic Emirate’s recreation, the UAE will likely choose to engage with the Taliban, rather than isolate it, in the months ahead.