Turkey’s offer to secure Kabul’s airport might turn into a perilous mission unless it reaches some understanding with the Taliban and secures the critical support of regional actors such as Pakistan and Iran. 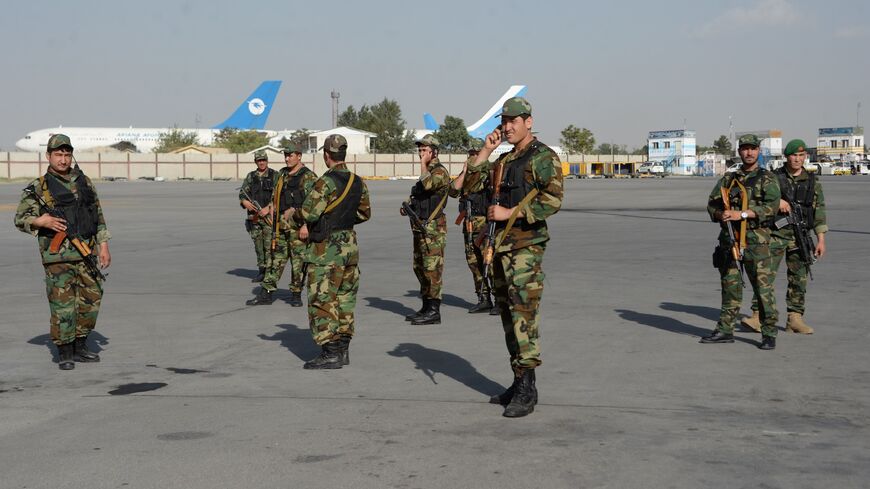 Security guards for Afghan Vice President Abdul Rashid Dostum look on at Hamid Karzai International Airport in Kabul on July 22, 2018. After Dostum returned from exile that day, a suicide attack near the airport killed 14. - NOORULLAH SHIRZADA/AFP via Getty Images

Turkey is out to drum up support for its offer to take charge of Kabul’s airport after US-led NATO forces complete their withdrawal from Afghanistan in September. The Taliban’s objections stand out as a major uncertainty, adding importance to how Iran and Pakistan, two key neighbors of Afghanistan, will approach Turkey’s role.

Turkish Foreign Minister Mevlut Cavusoglu held a trilateral meeting with his Iranian and Afghan counterparts June 20 during a diplomatic forum in Turkey’s Mediterranean city of Antalya. A joint statement after the meeting emphasized the three countries’ commitment to increase cooperation and support “a sovereign, independent, democratic and unified Afghanistan,” but made no mention of Turkey’s offer to guard and run Kabul’s international airport.

Speaking after the meeting, Afghan Foreign Minister Haneef Atmar said the three ministers had agreed to cooperate in three “important” areas. These are the peace process in Afghanistan, economic ties and security issues — including counterterrorism and the prevention of organized crimes and illegal migration. He welcomed Turkey’s “bold” offer to secure the airport, pledging that Kabul would “fully” back it. “We very much welcome Turkey's willingness to sustain the capabilities and the facilities as well as the high-level technological arrangements for the airport, which will be necessary for the continuous presence of the diplomatic community, as well as the continued support of the international community to Afghanistan and our national security forces,” he said.

Indeed, a continued Turkish presence after NATO’s withdrawal appears to be the best option for the Afghan government. And despite the Turkish-Iranian rivalry in the region, the idea is likely to appeal also to Tehran as well, if it would mean less US influence in Afghanistan.

The Taliban, however, is the crucial party here and its initial reaction has been negative. “Turkey was part of NATO forces in the past 20 years, so as such, they should withdraw from Afghanistan,” a Taliban spokesman told Reuters earlier this month, citing the Feb. 29, 2020, deal between Washington and the Taliban. “Otherwise,” he added, “Turkey is a great Islamic country. Afghanistan has had historical relations with it. We hope to have close and good relations with them as a new Islamic government is established in the country in future."

Assuming a security mission in Afghanistan without an understanding with the Taliban would be fraught with serious perils for Turkey. This makes Pakistan’s stance even more important, given its role in fostering the Taliban and ongoing influence over the movement. Could Pakistan soften the Taliban in favor of Turkey? Would the Taliban acquiesce to Turkey’s military presence in Kabul at a time when the Taliban are stepping up their territorial gains and eyeing a return to power?

According to Aqa Mohammad Qurishi, an Afghan academic and writer, Turkey’s historical friendship with Afghanistan, its peaceful record in the country in the past two turbulent decades and the Afghan people’s welcoming of a new role for Turkey are all facilitating factors, but an array of challenges remains.

“I think Turkey’s new role will be fruitful for Afghanistan, particularly … in coordination with NATO, but the Afghan people will not like Pakistan’s direct involvement in the mission,” Qurishi told Al-Monitor. “The second challenge is Iran’s attitude regarding Turkey’s involvement,” he added.

The mission would “face many obstacles” unless it rests on a clearly defined agreement with the Afghan government that would address also the concerns of regional countries, Qurishi said, stressing that the Taliban were unlikely to change their stance. Despite Atmar’s positive messages in Antalya, the Kabul government has yet to formally accept Turkey’s proposal, he noted.

Washington has welcomed a “lead role” for Turkey in securing the airport, and a Pentagon delegation was expected in Turkey on June 24 to discuss technical matters. According to a Pentagon spokesman, “There are still details to be worked out. There is a lot more work to be done.”

Turkey’s offer comes as part of efforts to mend fences with the United States. Some even speculate that the offer is meant to soften Washington on Turkey’s purchase of Russian air defense systems, which remains a major crisis between the two NATO allies.

Turkey currently has about 500 troops in Afghanistan and is responsible for running the military section of the Kabul airport. Speaking after his meeting with US President Joe Biden last week, Turkish President Recep Tayyip Erdogan said Ankara was looking to partner with Pakistan and Hungary in the new mission.

Asked about the issue during the forum in Antalya, Pakistani Foreign Minister Shah Mahmood Qureshi said he had yet to hear the details of Turkey’s proposal, even though he said Islamabad was comfortable working with Ankara in any realm.

Given that the airport would be a valuable target for the Taliban, an armed confrontation with the insurgents could bear on Ankara’s ties with Islamabad. Under US pressure, Pakistan has scaled back its ties with the Taliban, but never cut them. The Taliban hail mostly from the Pashtun ethnic group, which inhabits both sides of the Afghan-Pakistani border and remains a major factor swaying bilateral ties.

As for Iran, its approach to the Taliban has significantly softened since it backed the overthrow of the hard-line Sunni movement following the US invasion of Afghanistan in 2001. Iranian activity has grown in Kabul, Herat, Bamiyan and Daikundi — areas inhabited by the Shiite Hazara minority — since Iran's Islamic Revolutionary Guard Corps began recruiting Afghan fighters for Syria in 2013. The Taliban may be irked that Iran has now gained a foothold for interference in Afghanistan, but their relationship has notably improved, as evidenced by a series of bilateral contacts in recent years. Tehran has yet to express a position on Turkey’s prospective mission in Kabul.

Russia and China have to be factored in as well.

Like Tehran, Moscow did not oppose the US invasion, but has played a double game since then, wary of growing American influence in Central Asia, a region it views as a backyard. Russia has developed relatively close ties with the Taliban and, in March, hosted peace talks between the movement and the Afghan government. Asked about Turkey’s plan to guard the Kabul airport, a Russian Foreign Ministry spokesperson said June 17 that continued Turkish military presence in Afghanistan would go against the US-Taliban deal on the withdrawal of foreign troops.

As for China, its interest in Afghanistan has grown in recent years amid efforts to sever links between its Uighur separatists and the Taliban and advance its ambitious Belt and Road project. On June 3, Chinese Foreign Minister Wang Yi announced an eight-point understanding with his Afghan and Pakistani counterparts, calling for a bigger role for regional countries in stabilizing Afghanistan.

Turkey’s offer to secure the airport has been conditioned on political, financial and logistical support from NATO, but, obviously, Turkey cannot rely on NATO backing alone for a safe mission in Kabul. A UN Security Council resolution, backed by Russia and China, would strengthen Turkey’s hand, yet such a prospect appears unlikely. Moreover, international support is not a guarantee of a smooth ride in Afghanistan amid the internal rifts plaguing the country since 1979. Drawing on ethnic and historical bonds, Turkey may take the amity of the Uzbek and Tajik communities for granted, but could hardly do so with the majority Pashtuns, who form the backbone of the Taliban.

Meanwhile, NATO has approached Qatar for a base to train Afghan soldiers after its withdrawal. According to Reuters, the United States, Britain and Turkey are among NATO allies ready to contribute forces to a training mission in Qatar.

All those developments have been taking place amid a stalemate in the peace talks between Kabul and the Taliban, which insists on the establishment of an “Islamic system” to end the conflict in the country. Moreover, the Taliban have seized dozens of districts from government forces since the NATO withdrawal began in May, extending Taliban control to at least 50% of the country’s territory, excluding urban centers, according to UN estimates. A worst-case scenario might see the Taliban threaten Kabul as they quickly fill the vacuum after NATO’s departure.