Will Turkey use Syrian mercenaries in Kabul?

Turkey is allegedly planning to use Syrian fighters in its proposed mission to guard and run Kabul’s airport, but this time recruitment is expected to proceed via private security firms. 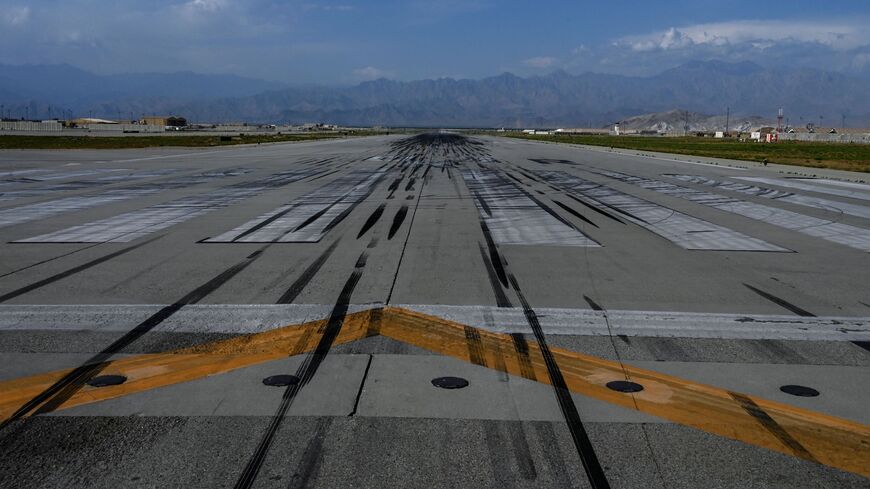 A general view of the runway tarmac inside the Bagram US airbase after all US and NATO troops left, some 70 kilometers north of Kabul on July 5, 2021. - WAKIL KOHSAR/AFP via Getty Images

Turkey’s government appears to have learned little from the troubles it has faced for deploying Syrian fighters in the wars in Libya and Nagorno-Karabakh, as media reports suggest it is now out to recruit mercenaries for its planned mission to secure Kabul’s airport after the US-led NATO mission completes its withdrawal from Afghanistan.

According to the Euphrates Media Center, a Syrian Kurdish news outlet, members of Turkey’s National Intelligence Organization discussed the issue June 24 with representatives of several rebel factions under the banner of the Turkish-backed Syrian National Army, including Suqour al-Sham, Suqour al-Shamal, Faylaq al-Majd, the Samarkand Brigade, the Hamza Division, the Sultan Murad Division and the Suleiman Shah Brigade. The factions were told to start preparations for the deployment of 2,000 fighters to Afghanistan, the report said, adding that the rebel representatives asked for monthly salaries of $3,000 for the mercenaries. Other Syrian Kurdish media outlets reported the meeting took place in Hawar Kilis, a village near the town of Azez, not far from the Turkish border, and the intelligence officials asked for 2,600 mercenaries.

The Syrian Observatory for Human Rights reported that unlike the transfer of mercenaries to the Libyan and Nagorno-Karabakh wars, this time Turkey is more image-savvy and will recruit them through official contracts with Turkish private security companies. According to the observatory, the process is to be supervised by Turkish intelligence officers because faction members do not trust their leaders. Under the plan, the mercenaries would be tasked mainly with guarding the Kabul airport and government buildings without any involvement in operations against the Taliban, and would receive monthly salaries of $2,000 to $3,000.

Turkey’s recruitment of Syrian fighters in support of its Libyan and Azerbaijani allies has been mired in controversy, including allegations that some mercenaries were not paid the promised sums, that some of their commanders stole money slated for salaries, that fighters who wished to return to Syria were not allowed to do so and that promised compensation was not paid to wounded mercenaries or the families of those killed. None of those considerations appear to have deterred Ankara.

Ankara denied transferring fighters to Nagorno-Karabakh, despite ample reports to the contrary. As for Libya, its initial denials were followed by acknowledgement, and the mercenaries eventually became an overt element of its Libya policy. The Syrian fighters are now a fundamental issue in the UN-sponsored political settlement process, with Ankara seeking to use them as a bargaining chip to secure its influence in post-war Libya. According to US officials, Turkey and Russia tentatively agreed to begin removing foreign fighters at the Berlin conference on June 23, as various Libyan parties see the continued presence of foreign forces and mercenaries as a major stumbling block for the war-torn country’s elections, scheduled for Dec. 24.

The reports about Turkey mobilizing mercenaries for Afghanistan are hard to dismiss out of hand, given that Ankara has not faced any real international pressure or sanctions for using foreign fighters in other regional conflicts. Ankara’s offer to guard and run Kabul’s airport after NATO’s withdrawal is widely seen as an effort to win favor with Washington and thaw the chill in bilateral ties. But unlike the Turkish interventions in Syria, Libya and Nagorno-Karabakh, Ankara has struggled to justify such a mission at home. Deadly attacks on Turkish troops in Afghanistan would have a domestic political cost that opting for Syrian mercenaries would avoid.

Furthermore, Ankara is seeking a package of financial and military aid from its Western allies for the airport mission, so the expenses of “private security guards” might eventually emerge as an important item in the package.

President Recep Tayyip Erdogan has been keen to add Turkish private security entities to the toolbox of his expansionist foreign policy, taking inspiration from foreign examples such as the Russian Wagner Group and US military contractor Academi, previously known as Blackwater. Syrian rebel factions might provide a long-term pool for Turkish private security firms in future regional interventions after the planned Afghan mission.

That said, any mercenary involvement in the mission would require the approval of both the international coalition and local actors in Afghanistan. In the Libyan and Nagorno-Karabakh conflicts, the consent of the Tripoli-based government and Baku, respectively, were enough. In Afghanistan, however, the issue of militias has been a fundamental problem since the country descended into a spiral of war, civil strife and foreign invasion in 1979.

How efficient foreign mercenaries could be is also open to question. The Kabul international airport — a high-value target for the Taliban — is in the heart of the Afghan capital, meaning that any defense strategy for the airport should be integrated with security plans in the city, particularly the protection of diplomatic missions and routes to the airport.

Asked about Turkey’s alleged plans to recruit Syrian mercenaries for Afghanistan, Pentagon spokesperson John Kirby said last week he was not in a position to confirm the reports. Though he did not explicitly rule out the mercenary option, he outlined tough criteria that Syrian fighters would struggle to meet. “It would be extraordinarily important to us that that security presence be competent and capable and subject to international rule of law and … the proper conduct and behavior for international security forces; that they would be responsible to those protocols and accountable to those kinds of protocols,” Kirby said.

Turkish troops in Afghanistan currently number 600 and are responsible for running the military section of the Kabul airport as part of NATO’s Resolute Support Mission. Ankara is apparently not planning an additional military deployment. The United States is expected to keep about 650 troops to provide security for diplomats, according to the Associated Press. In addition, several hundred US soldiers are expected to remain at the Kabul airport, potentially until September, to assist their Turkish counterparts until the new mission is in place.

Most crucially, the Taliban is fast expanding its territorial control, including along the borders with Iran, Tajikistan and Uzbekistan, while Turkey’s proposed mission remains uncertain. Following Turkish-US discussions on technical details last month, Turkish Defense Minister Hulusi Akar and US Defense Secretary Lloyd Austin had a phone call July 8, but a conclusive outcome has yet to emerge.