The Takeaway: Iran can live with Taliban takeover in Afghanistan 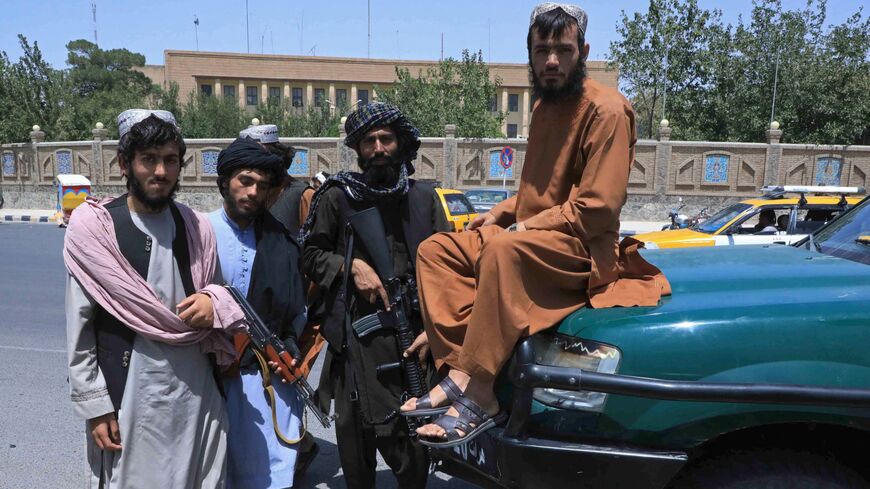 Hot Take: Iran sees opportunity in US withdrawal from Afghanistan

After two decades with a US-backed government and American military presence on its northern border, Iran is not unhappy about the return of the Taliban-led government in Afghanistan. Tehran has cultivated relations with the "Emirate" in recent years, even as it maintained proper ties with the outgoing Afghan government.

Interests. Iran shares a 572-mile border with Afghanistan and is host to 3 million Afghans. Iran’s national security interests also include concerns about international drug trafficking from Afghanistan, as well as terrorist groups such as the Islamic State Khorasan, the Afghanistan branch of the Islamic State. Since 2001, Tehran also had to contend with the presence of the US military just across the border.

Culture matters. Iran has a substantial cultural footprint in Afghanistan. Dari, the Afghan version of the Persian language, is spoken by 78% of the population and is the preferred language of governance in Kabul. Herat province, on Iran’s eastern border, is a historic gateway to Iran and was a key cultural and religious hub of the Persian Empire. Afghanistan is 90% Muslim, with up to 17% of the population Shiite, the rest Sunni.

Backing UN over US mediation. Iran has backed the UN playing a "central role" in "an intra-Afghan peace process." The Iranian Foreign Ministry, however, disagrees with the UN Security Council when it comes to the US-Taliban Agreement. While UN Security Council Resolution 2513 (March 2020) endorsed the US-Taliban Agreement (Feb. 29, 2020), Iran's Foreign Ministry called the agreement "an effort by Washington to legitimize its military presence," adding that "the US has no legal jurisdiction to decide the future of Afghanistan." The US deals conditioned the withdrawal of US forces in Afghanistan to an intra-Afghan political process and a shared commitment to counter terrorist activities against al-Qaeda, the Islamic State Khorasan and other designated groups.

Tilting toward the Taliban. Iran’s diplomatic statements until recently mostly tilted toward the outgoing Afghan government, while calling for dialogue with the Taliban, which it cautioned to avoid "unwarranted" use of force as "foreign forces" are withdrawn. However, as the Taliban gained ground in its military campaign in recent months, Iran showed more deference to the Taliban, with some Iranian officials and state-funded media facing accusations of "canonizing the Taliban," as our correspondent reports here. Tehran hosted Taliban and government delegations in July to boost Iran's position as a facilitator and mediator among the Afghan parties.

Mixed news for US. The fall of Kabul to the Taliban could encourage the Biden administration to take a harder line on Iran, as Mark Fitzpatrick writes below. Looked at another way, though, Iran’s stock may have gone up, as its influence in Afghanistan remains solid, while the US presence recedes. James Dobbins, who led US negotiations for the Bonn Agreement on Afghanistan in December 2001, including negotiations with Iran on Afghanistan, said, "Iran will certainly be more relevant, but not necessarily more cooperative," especially under new President Ebrahim Raisi. Dobbins, now with RAND, also said, "Iran has long been establishing relations with the Taliban and is maintaining its embassy in Kabul. On the other hand, it doesn’t want to see instability in Afghanistan. If the Taliban begin provoking large refugee flows that will be a problem for Iran."

More on Iran-Afghanistan: An alleged Sunni-Shiite divide between the Taliban and Iran is not an issue, Shelly Kittleson explains in this week’s "On the Middle East" podcast, given their deepening of ties over the past two decades. You can also see her article in Foreign Policy here on why Iran and the Taliban will get along just fine.

The intense backlash surrounding President Joe Biden’s pullout from Afghanistan is being watched closely in Israel, where current and former government officials are hoping the intelligence failure will force Biden’s hand on Iran.

“There’s an opportunity here,” a senior diplomatic source in Jerusalem told Ben Caspit, arguing that Biden cannot afford another American defeat in the Middle East. “It’s possible to leverage events there in our favor,” a former intelligence source said of the chaotic Afghan withdrawal. New Israeli Prime Minister Naftali Bennett will meet with Biden at the White House on Aug. 26, where he is “expected to tell the president that giving in to Iran after folding in Afghanistan could set off a disastrous chain reaction with deleterious effects for generations to come,” writes Caspit.

Iranian President Ebrahim Raisi’s foreign policy team is taking shape, but it remains to be seen whether the country’s new leadership is willing to make the compromises necessary to restore the nuclear deal known as the Joint Comprehensive Plan of Action (JCPOA).

Raisi has said he’s ready to support “any diplomatic plan” that lifts sanctions, which have crippled Iran’s economy.

For its part, the United States could move things along by broadening its promised sanctions relief or by softening its position on follow-on talks that address Iran’s ballistic missile program and proxy activity. But as Mark Fitzpatrick writes, such concessions could prove politically difficult for Biden following Afghanistan’s collapse. “The Taliban’s stunning march into Kabul limits his room to maneuver,” says Fitzpatrick. "Having been tagged with losing Afghanistan (notwithstanding the blame shared by three previous presidents), Biden cannot appear to be giving in to Iran’s hard-liners.”

Three men captured in Turkey and accused of enslaving a 7-year-old Yazidi girl are out of prison, a consequence of the Turkish penal code’s “effective remorse” provision that Fehim Tastekin says “is becoming a means for suspects to evade due punishment.” The provision requires members of criminal and terrorist groups to show regret and provide useful information to authorities. Increasingly, jailed Islamic State suspects in Turkey are renouncing their extremist ideologies in return for sentencing reductions. But whether their change of heart is genuine is another story.’

After Turkish Olympic volleyball star Ebrar Karakurt faced online abuse over intimate photos with a woman that she posted to Instagram, Turks of all stripes have come to her defense on social media. Turkey's society tends to be more accepting of the LGBTQ community than the Turkish government, which has banned Gay Pride marches since 2016 and whose interior minister has called gay people “perverts. As Amberin Zaman explains, “Homophobia has become a rallying cause for Turkey’s President Recep Tayyip Erdogan” and other populist leaders to whip up support. Karakurt is a member of Turkey’s “Sultans of the Net” women's volleyball team, whose uniforms stirred a debate on women’s dress.

Months after a cease-fire ended the latest Israel-Hamas conflict, tensions remain high in East Jerusalem and the West Bank. Ahmad Melhem covers the Palestinian protests that erupted over Israel’s planned construction at Hebron's Ibrahimi Mosque, which includes the installation of an elevator and road for Israeli settlers’ use. Elsewhere in the West Bank, residents are skeptical of Israel’s recent authorization for the construction of more than 1,000 Palestinian housing units in Area C.

In Sheikh Jarrah, Taghreed Ali has this story on Palestinian families forced to share homes with settlers in the contested East Jerusalem neighborhood. The Al-Kurd family has hung a “we will not leave” banner outside their house, “a symbol of resistance against Israeli decisions that aim to evict Palestinians from the neighborhood.”

Five young men from the Gaza Strip have formed what may be the first rock band in the impoverished Palestinian enclave. The band, Osprey V, is pushing to be accepted in Gaza’s conservative society, and its English-language lyrics make that especially challenging. The band’s guitarist told Ruwaida Amer that music is universal and that “rock music in particular expresses the pain that many of us in Gaza feel.”

Prime Minister Naftali Bennett has promised to make Israel a leader in the fight against climate change, and as part of that effort, the government has proposed a carbon tax and a sharp hike in taxes on single-use plastics. But Maya Jacobs, one of Israel’s leading environmental activists, says Bennett’s government doesn’t appear interested in meaningful climate reform and has reduced the authorities of the Ministry of Environmental Protection. If Israel wants to become a low-carbon economy, “We need to change the way we behave,” said Jacobs. Her criticism came as fires this week engulfed forested areas west of Jerusalem. Listen to Jacob’s full interview with Ben Caspit here.

The US withdrawal from Afghanistan has raised concerns that the country could again become a safe haven for terrorism, even after the Taliban agreed in February 2020 that it would prevent groups like al-Qaeda from using Afghan soil to stage attacks against America. Despite pressure from the coalition, Afghan forces and its adversary the Taliban, the Islamic State Khorasan Province “maintains the ability to conduct mass casualty attacks,” according to a recent Department of Defense report. The Islamic State affiliate in Afghanistan may also be relocating to urban areas, making it more difficult to hunt down its members. Read the full Pentagon report here.