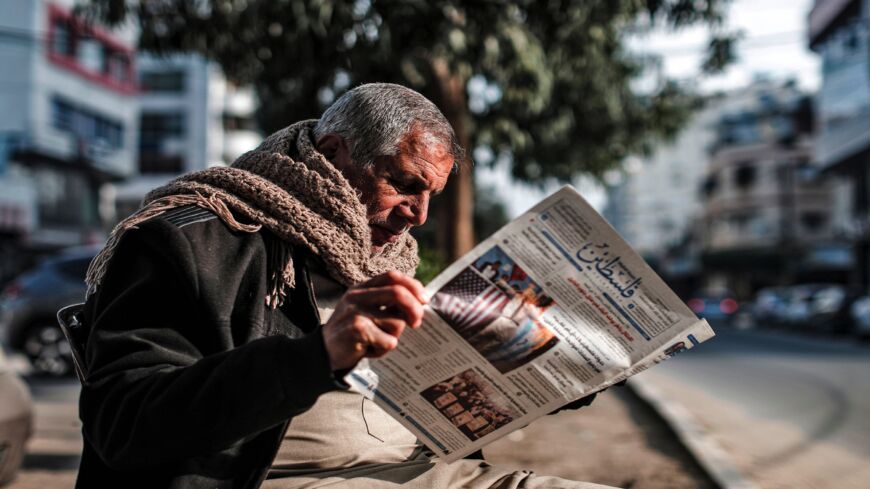 A Palestinian reads the "Filastin" (Palestine) daily newspaper while sitting along a street in Gaza City on Jan. 28, 2020. - MAHMUD HAMS/AFP via Getty Images

GAZA CITY, Gaza Strip — The Palestinian Observatory for Verification and Media Professionalism (Kashif) has recently intensified its monitoring of all media content related to the attacks on the Gaza Strip launched by Israel on May 10.

The observatory fact-checked all information and content of questionable authenticity that may have included excerpts taken out of context, unclear content or hate speech, among others.

People in charge of fact-checking websites who spoke to Al-Monitor said that during the 11-day conflict in Gaza, there were more rumors and misinformation compared to past periods related to the coronavirus pandemic, the legislative elections and the Israeli forced eviction of the residents of Jerusalem’s Sheikh Jarrah neighborhood.

Such misleading news was confronted by a group of fact-checking websites — in addition to Kashif — such as Tayakan, Misbar and Eekad, as well as the fact-check platform of Agence France-Presse, among others.

Bakr Abdel-Haq, editor-in-chief of the Kashif website, told Al-Monitor that their platform, which is an independent Palestinian platform aimed at combating misinformation in the Palestinian media space, has been working to combat and reduce misinformation by fact-checking content attributed to local, Hebrew and international sources.

Ahmed Balousha, managing editor of the Misbar fact-checking website, told Al-Monitor that during the recent Israeli attack on Gaza, there was a huge number of rumors, misleading news and fabricated images.

He revealed figures exclusive to the independent Misbar website. He said the number of articles fact-checked by the website during the month of May significantly increased, as the website verified 308 political, sports and health news articles related to the Israel military attack on Gaza and the Sheikh Jarrah case.

Balousha indicated that the Israeli media resorted to old news, pictures and allegations, as spokesmen for the Israeli army published false allegations.

“Political news had the largest share of such widespread allegations. Out of 308 [articles] that Misbar examined, more than 200 topics carried misleading details, data, or images, while 83 were fake, and the rest of the news was either selective, sarcastic or provocative,” he added.

Abdel-Haq said fact-checking platforms in Palestine face several difficulties, including the absence of laws on the right to access information. He said the absence of relevant laws and the lack of cooperation from various outlets with the Kashif team are hindering the efforts of the platform to ensure the flow of correct information to the Palestinian public. Other parties refuse to deny or confirm the veracity of the news and refuse to provide the source of such news, Abdel Haq said.

Another obstacle to the work of Kashif, he said, is the public sometimes does not accept the verification processes carried out by the observatory, namely on news related to exaggerating the capabilities of the resistance in Gaza and the Israeli losses during the war, knowing that some have gone so far as to accuse the observatory of treason.

While the Misbar team faced a huge amount of misleading news, Balousha told Al-Monitor, “Because of the large amount of misleading news spread on several media outlets during the military attack on Gaza, we were forced to focus on the most common allegations that reached a large number of users. Yet there may be some allegations that we failed to address.”

Imad al-Asfar, the coordinator of monitoring and evaluation at the Media Development Center at Birzeit University (near Ramallah), told Al-Monitor rumors and fake news constitute a particular loophole in a society under war.

“In a society under war, every rumor has a double effect. Citizens who come under the bombardment do not have the luxury of waiting to verify, for example, a rumor about the presence of wanted persons in their buildings or weapon stores next to their house. They just rush to escape the danger, no matter its likelihood,” he said.

Asfar added, “In a society under war, reporting news and information is a dangerous process that requires speed and faces challenges related to transportation and to poor communication with officials to deny or confirm information. Add to this the internet and power cuts that interrupt broadcasting.”

Asfar said what fact-checking teams have to primarily do is maintain their integrity and distance from intellectual and partisan interests, affiliations and loyalties, all the while adhering to the ethics of fact-checking, which prevent conflict of interests and harm to victims.