The heavy toll of Israel-Hamas war, by the numbers

A look at the destruction wrought by more than a week of fighting between Hamas and Israel. 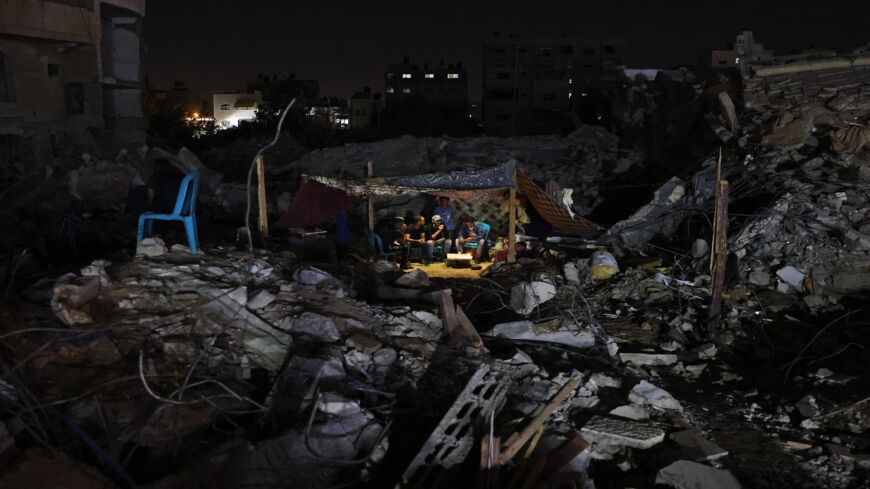 Palestinians sit in a tent that has been set up on top of the ruins of a building destroyed in recent Israeli airstrikes, in Gaza City, on May 24, 2021. A cease-fire was reached late last week after 11 days of deadly violence between Israel and the Hamas movement, which runs Gaza. - MOHAMMED ABED/AFP via Getty Images

Although an Egyptian-brokered cease-fire between Israel and Hamas halted the latest round of bloodshed, aid organizations say the region's humanitarian crisis has only just begun. Residents in Gaza are still experiencing shortages of clean drinking water and medicine, and families are slowly returning to find their homes reduced to rubble. As the United Nations appeals for outside aid, here’s a look at the conflict’s aftermath.

242: The number of Palestinians, including 66 children and 38 women (four of them pregnant), who were killed during the 11-day conflict, the United Nations says. According to the UN’s human rights office, OCHA, civilians accounted for at least 129 of those killed. Israel, on the other hand, says at least 225 of the dead were militants, many of them senior Hamas commanders.

1,948: The number of Palestinians who were injured during the Israeli bombardments, according to the Ministry of Health in Gaza. Of the total, Palestinian officials say 610 were children and nearly 400 were women.

12: The number of people in Israel, including one soldier and three foreign nationals, who were killed by the militants’ rockets or when running for shelter during the attacks. Two children were also among the dead.

352: The number of Israelis injured by rockets fired from Gaza or while fleeing to emergency shelters, including over 50 listed as serious, according to Israeli medics.

$22.5 million: The amount of aid released by the UN to address the humanitarian crisis in Gaza. President Joe Biden has pledged to marshal international support for the reconstruction efforts, but many donor governments are wary of giving aid that could end up in the hands of Hamas, which governs the Gaza Strip.

77,000: The number of Gaza residents displaced by Israel’s bombardment whose homes were destroyed or who lost access to electricity or sanitation. A majority of them sought refuge in schools run by the UN’s Palestinian refugee agency, UNRWA.

250 miles: The length of the tunnel network used by Hamas to move fighters and weapons, according to the Israeli army, which said it destroyed nearly a third of that underground system with airstrikes.

4,360: The number of rockets and projectiles fired by Hamas, Islamic Jihad and other armed groups, of which roughly 680 fell short and landed in Gaza. Ninety percent of the rockets were intercepted by Israel’s Iron Dome missile defense system, the Israeli army said.

$368 million: The amount of revenue lost by Israeli businesses during the conflict, according to the country’s Manufacturers' Association. The industry group said the losses were mostly due to employees choosing to stay home from work amid the rocket fire.

<4%: The percentage of Gazans partially or fully vaccinated against coronavirus. Health experts have warned of the potential for another coronavirus outbreak, as displaced families cram together in overcrowded shelters, and hospitals are overwhelmed treating patients from the Israeli strikes.

53: The number of schools the UN estimates were damaged in Gaza. The London-based Save the Children charity says the fighting has compounded existing trauma among children living in the Hamas-run territory.

17: The number of hospitals and primary health centers damaged in Gaza, according to the UN. The only laboratory conducting COVID-19 tests was also damaged but reopened last week.