UN High Commissioner for Human Rights Michelle Bachelet called for Israel to allow for independent investigations into its latest escalation with Hamas. 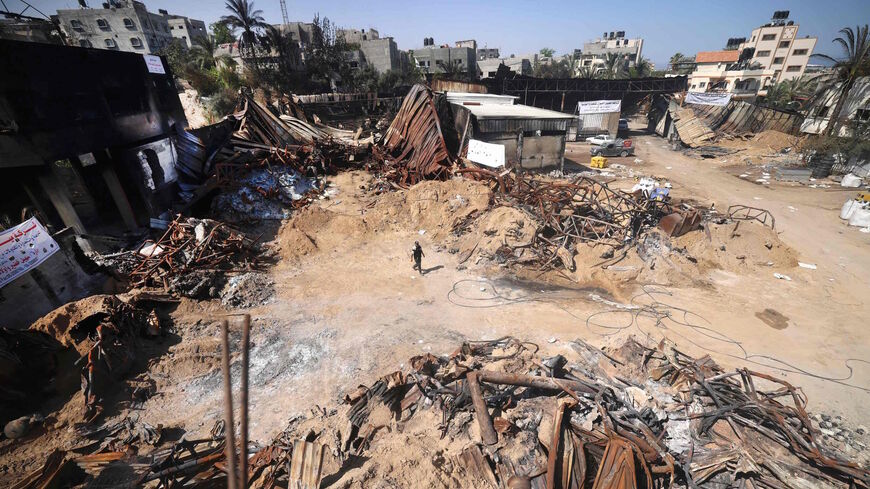 A Palestinian worker checks the destruction at an agricultural fertilizer factory hit in the recent Israeli airstrikes in Beit Lahia, Gaza Strip, on May 26, 2021. - MAHMUD HAMS/AFP via Getty Images

The United Nations’ rights chief warned on Thursday that Israel’s bombing campaign against Hamas targets in the Gaza Strip may amount to war crimes.

Speaking during a special session of the UN Human Rights Council, UN High Commissioner for Human Rights Michelle Bachelet called for Israel to allow “impartial, independent investigations into actions taken during this escalation.”

Bachelet said Israel's airstrikes in the Gaza Strip raised “serious concerns” that Israel was not in compliance with international humanitarian law’s principles of proportionality.

"If found to be indiscriminate and disproportionate in their impact on civilians and civilian objects, such attacks may constitute war crimes," Bachelet said, also noting precautions taken by Israel, such as advance warning of some attacks.

In reference to the militant group Hamas, Bachelet also said it’s a violation of international law to stash military assets or fire rockets from densely populated civilian areas. Despite such tactics, she said, “The actions of one party do not absolve the other from its obligations under international law.”

An Egyptian-brokered cease-fire took effect on Friday, ending 11 days of heavy fighting between Israel and Hamas. At least 242 Palestinians, including 63 children, died in the Israeli airstrikes and more than 1,900 were injured, the UN said.

Bachelet condemned the death and injury of Palestinian and Israeli children as “a source of shame for all.”

“We cannot lose sight of their suffering and loss,” she said. “No matter how long the road has been, 'never-ending' should not be an acceptable term.”

Hundreds of houses, apartments and other buildings were destroyed by Israeli strikes in the Hamas-run Gaza Strip, according to the United Nations. Bachelet said the UN has not seen evidence that the militants were using the civilian infrastructure that was bombed by Israel.

More than 77,000 Gaza residents were displaced when their homes were destroyed or they lost access to electricity or sanitation. A majority of them sought refuge in schools run by the UN’s Palestinian refugee agency, UNRWA.

Israel’s actions in the Palestinian territories, including its settlement expansion and war with Hamas in 2014, are currently the subject of an investigation announced by the International Criminal Court in March. Israel argues the Hague-based court lacks jurisdiction because the Palestinians, despite joining the ICC in 2015, aren’t an independent sovereign state.

On May 12, the ICC’s chief prosecutor, Fatou Bensouda, said her office was monitoring the latest conflict between Hamas and Israel for potential war crimes and would “factor any matter that falls within its jurisdiction.”