Turkey’s first and only political fact-checking website aims to make political actors in Turkey accountable for their statements. 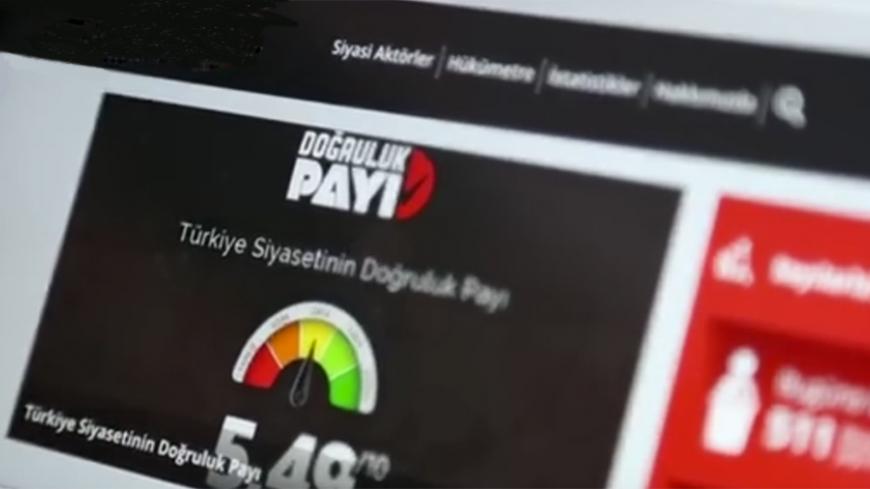 Dogruluk Payi ("Share of Truth") is Turkey's first and only political fact-checking website, and was recently named one of "Turkey's Change Makers" by the Sabanci Foundation. - Youtube.com/Fark Yaratanlar

Every year since 2009, the prominent Sabanci Foundation has been naming “Turkey’s Change Makers” winners. The foundation then releases “the extraordinary stories of unique people” who contribute to social development. The awards are given in categories of civic participation, economic development, education, environment, health and social justice. On Dec. 15, Dogruluk Payi (Share of Truth), Turkey’s first and only political fact-checking website, was announced as the fourth Change Maker of the seventh season.

An initiative of the Dialogue for a Common Future Association, Dogruluk Payi was launched in June 2014. Its young founders were concerned about Turkey’s polarized culture and the truthfulness of political statements.

Dogruluk Payi founders Baybars Orsek and Ferdi Ferhat Ozsoy met during their internships in Washington, in the summer of 2011. While observing American politics, they came across the concept of fact-checking. “The politicians were constantly using factual arguments in their speeches and there were organizations such as PolitiFact that fact-checked those statements. That’s when we got the idea. This was definitely a critical approach to polarized and tense political rhetoric,” Orsek told Al-Monitor.

The aim is to work objectively and independently from political influences and make political actors in Turkey more responsible, while at the same time provide a reliable source for the voters to obtain factual information. The staff is made up of three people who work full time and four part-time editors. Most of them have graduate degrees in political science or economics. None of them have a background in journalism, which, according to the founders, ensures a scholarly approach — one of the crucial elements of Dogruluk Payi’s neutrality and independence.

Every day around 5 p.m., project coordinator Batuhan Ersun sends approximately 10-15 different statements from Turkey’s daily agenda to the editors for their consideration. They pick the statements based on their expertise and fact-check them. They first check the source of the statement and then consult open sources, both primary (main news agencies) and secondary (research, nongovernmental organizations, etc.). If necessary, the editors reach out to the available pool of experts and share the fact-checked results with the other editors for peer review. The project coordinator receives the information back, after which he does the final checks before releasing the results to the public. They share results on a daily basis with the public via their website, an email list and social media accounts on Twitter, Facebook and YouTube. A politician’s statement is rated as having one of the following degrees of truth: wrong, far off, medium, close and correct.

Most of the claims that Dogruluk Payi examined were in the fields of growth and employment. For example, the latest analysis confirmed the accuracy of the statement by Republican People’s Party member of parliament Kadim Durmaz that one out of four jobless people is a university graduate, and that 12.1% of university graduates are without a job.

“As a fact-checking organization, we don’t have the capacity to cover all political statements. Our scope is mostly limited to either questionable statements or statements that draw public attention. This approach undeniably pushes us to look for more false statements,” said Orsek. For example, last week’s most-read analysis by Dogruluk Payi was related to the fact-checked fake stories published in several pro-government media outlets that claimed some 75 academics at universities in the United States had been arrested after the academics asserted 9/11 had been an inside job.

Additionally, Orsek explained that elections that have followed one after another in Turkey in the last two years might be the cause for the very low percentage of politicians’ truthful statements. “In elections, politicians might be more likely to use statements without strong factual background in order to mobilize and/or energize their constituencies,” he said.

In general, the founders are content about the fulfillment of their goals after the latest elections Nov. 1. The team set a monthly goal of covering 30 statements and/or special reports to publish. When asked about the responses of the public and whether people are suspicious of the group’s independence, Orsek confirmed that his team welcomes all feedback from the public and emphasized that it receives overwhelmingly positive reactions. “Both followers and politicians say we’re covering a great space in the political sphere in Turkey. They often use our results as reference to answer some claims on social media.”

But there have been negative reactions, as well. On the one hand, Dogruluk Payi’s team has been accused of working as foreign agents, while on the other hand, they were accused of secretly working for the Turkish government. Turkey is known for notoriously low levels of interpersonal trust, and Orsek shares another typical question from the incredulous and doubtful public: “They say, ‘Who’s going to fact-check your results?’ And we reply, ‘You should.’”

One of the most important pillars of Dogruluk Payi’s work is providing results to politicians whose statements get fact-checked.

Orsek explained that editors are doing their best to inform the public and to put pressure on politicians. Moreover, there have been a number of cases where the politician or someone from his office replies back with additional data and requests consideration of a change in the grading of the published analysis. Orsek added that though they have received harsh criticisms from the politicians questioning their expertise and even legitimacy in the early days, even those politicians have started to respect their fact-checked analyses that show false statements.

The team’s essential goal is to contribute to a society that demands truth and accuracy from Turkish politics and actors involved in it, and make Dogruluk Payi Turkey’s reference page for politics. Orsek believes the team has been “at least partially successful” with the aim of introducing fact-checking to Turkish media. He describes the three pillars of the group’s other goal: informing the electorate about issues that concern it before the elections, making politicians aware that their statements are being fact-checked by a nonpoliticized organization, and providing data-driven and policy-based content for traditional media to cover politics.

“Honestly, at first we had given more importance to the visibility in traditional media,” Orsek said. “We may have overvalued TV coverage, which we had before the elections, for reaching out to more people.” Currently, the team is more focused on producing its own content suitable for new media platforms such as podcasts, infographics, storytelling videos and other smart, sharable and informative contents. “Who knows, maybe one day we will have our own media network, totally operating on the Internet,” Orsek said.

Judging by the ever-increasing number of followers on Dogruluk Payi’s social media channels, and regardless of the negative critiques, grateful citizens continue with their overwhelming support. Dogruluk Payi’s commendable effort for bringing nonpartisan, objective, factual information to Turkish politics makes this endeavor deserving of all the praise it gets.