Teyit has been working for six years to interpret sometimes wild claims made in news media and online. 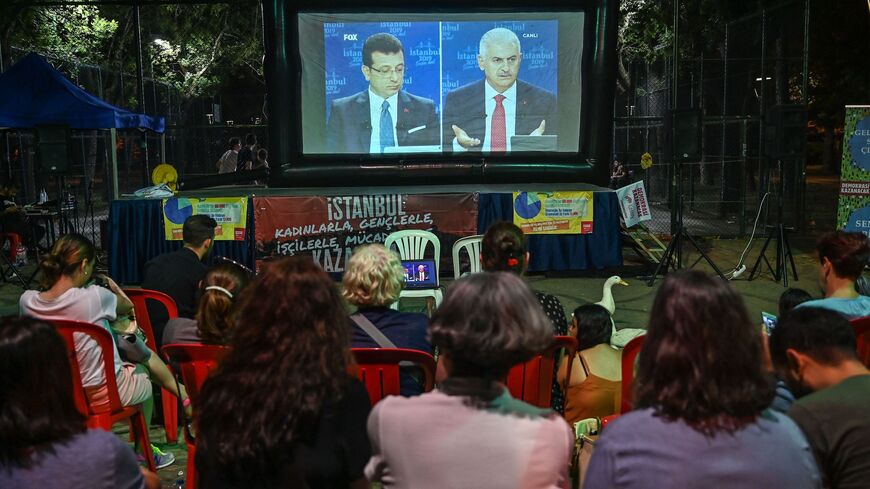 People watch a live broadcast of a televised debate between Istanbul's mayoral candidate Binali Yildirim (R) of Turkey's ruling Justice and Development Party and Istanbul's deposed mayor Ekrem Imamoglu (L) of the Republican Peoples Party as they sit at a public park in Kadikoy, a residential neighborhood, ahead of June 23 rerun of Istanbul elections, on June 16, 2019. - OZAN KOSE/AFP via Getty Images

ISTANBUL — As Turkey heads toward its most closely contested elections in 20 years, a group of independent fact-checkers is preparing to unravel the country’s partisan media environment.

Teyit (meaning corroboration or verification in Turkish) is a nonprofit enterprise established six years ago to verify or refute claims made in traditional news outlets and on social media.

The thousands of claims checked by Teyit’s fact-checkers cover a diverse range of subjects and not just the partisan assertions of political actors. The 10 most recent of the 3,325 analyses carried out concern soccer and poetry as well as politics.

Turkey is due to hold presidential and parliamentary elections by June 2023. President Recep Tayyip Erdogan faces the challenge of producing some positive news for voters who are struggling with the country’s worst economic crisis under his two-decade rule.

Most opinion polls show the opposition currently leading the race, even though Erdogan has rallied in recent months.

The media landscape, meanwhile, remains widely fractured, although the vast bulk of the traditional outlets lies in the hands of the government and its supporters.

“The news media is highly polarized,” Teyit founder Mehmet Atakan Foca told Al-Monitor. “The sources where you can get objective news do not exceed five fingers of a hand."

“While the mainstream media is mostly in the hands of groups associated with power, it is not possible to say that the rest are independent. Broadcasts obsessed with political ideologies are everywhere. Social media, on the other hand, has turned into a place that exploits oppositional energy and reinforces cynicism. … It can be said that there is a very emotional atmosphere in the media environment in Turkey.”

Teyit’s research found that the five worst-performing news outlets for publishing misinformation included two that back the government and two others that support the opposition. The fifth has a relatively neutral editorial policy.

Some 90% of the national media is under government control, according to Reporters Without Borders, leading to the growth of social media as an outlet for dissenting opinions and independent news.

The government, meanwhile, has introduced laws to exert greater control over online content.

Two years ago it gained sweeping powers to regulate social media and demanded tech companies such as Twitter, Facebook and YouTube open offices in Turkey. Financial penalties and threats to throttle traffic enforce the legislation.

Parliament, which is dominated by Erdogan’s Justice and Development Party (AKP) and its ultranationalist allies, last month adopted a law that carries a three-year prison sentence for those who spread loosely defined “disinformation” online.

Critics describe it as a “censorship law” that could be used to silence opposition campaigns and restrict public debate in the run-up to the elections.

Foca, whose group partnered with Facebook and Instagram owner Meta in 2018, said tackling disinformation was not unique to Turkey, but a lack of checks made it more open to abuse.

“There are serious doubts about the independence of the judiciary in Turkey,” he said. “This underlies the concern that the disinformation law will seriously undermine freedom of expression.”

Foca called for the government to improve the public’s digital literacy through awareness campaigns and education. Independent fact-checkers should be left to verify media claims, he added.

Teyit has revealed that both sides of the political divide are “equally active” in sharing misinformation.

In the year to October, Erdogan was the main target of misinformation, with 24% of false narratives being about the president. Kemal Kilicdaroglu, leader of the opposition Republican People’s Party (CHP), was the victim of 10% of untrue claims while 8% of falsehoods targeted CHP Istanbul Mayor Ekrem Imamoglu.

Erdogan’s prominent position “increases the flow of information and misinformation about him,” Foca said.

“We encounter misinformation about Erdogan that pretends to say things he doesn’t usually say or claims about the consistency of his behavior during his visits. Sometimes, there are allegations that try to make Erdogan appear more powerful than he actually is.”

Conversely, 89% of false stories about political parties and local municipalities concerned the opposition, with the CHP and Istanbul municipality leading the way.

Teyit itself has frequently been the subject of misinformation, according to Foca. “Groups that are generally dissatisfied with the facts we reveal publish posts targeting our employees rather than revealing evidence to refute our findings,” he said.

There are also “conspiracy theories” about Teyit’s funding and wild claims that malicious groups are “secretly supporting and directing [its] activities.”

In preparation for Turkey’s 61 million voters heading to the polling booths next year, Teyit has hired extra fact-checkers and is able to detect suspicious information faster than ever, according to Foca.

“We will also check the statements of politicians,” he said. “Thus, when going to the polls, [voters] will be able to be sure which group has given [them] the correct information. We are worried that wrong information will lead to wrong decisions. We want them to make decisions based on facts, not emotional reflexes.”