French statue considered offensive by Egyptians back in spotlight

Egyptian archaeologists are taking advantage of the global anti-racism movement to renew their calls on the French government to remove a statue of Jean Francois Champollion, who deciphered hieroglyphics, kneeling on the head of a Pharaonic king. 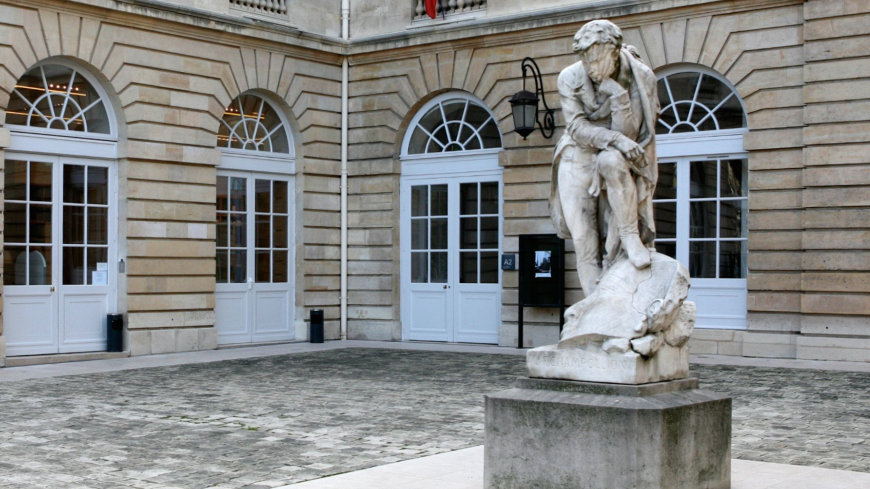 A statue in the courtyard of the College de France depicts Jean Francois Champollion, who deciphered hieroglyphics in the 19th century, standing with his left boot on a copy of a Pharaonic king’s head. - TWITTER/cdf531

The death May 25 of George Floyd has triggered massive international anti-racism demonstrations following calls to remove statues and monuments of historical personalities and achievements symbolizing racism and slavery.

Bassam el-Shammaa, a researcher in Egyptology and a senior tour guide, told Al-Monitor that the current protests that are rocking the United States and the United Kingdom and include the removal of racist statues are a golden opportunity for Egypt to demand the removal of the shameful Champollion statue in France.

Shammaa talked about the marble statue of the French archaeologist Jean Francois Champollion, who deciphered hieroglyphics in the 19th century. It depicts him standing with his left boot on a copy of a Pharaonic king’s head. The statue was carved in 1875 by Frederic Auguste Bartholdi, and is located in the courtyard of the College de France.

“The statue looks like the murder scene of George Floyd under the knee of the police officer," said Shammaa, who is also a member of the Egyptian Writers Union. “I hope that the French people who adore the Egyptian civilization support us and call their government to remove this shameful statue.”

Shammaa sent a letter to UNESCO calling for the removal of the statue. "I did that not as a representative of the culture or tourism and antiquities ministries, but as an Egyptian citizen. I hope they will positively respond to our demand."

Addressing the French nation June 14 amid the worldwide anti-racism demonstrations, French President Emmanuel Macron said that his country will not remove its statues or rewrite its history. “The republic won't erase any name from its history. It will forget none of its artworks, it won’t take down statues,” he said in a televised address to the nation.

Commenting on Macron’s statement, Shammaa said, “This statement reflects vanity and stubbornness. We will continue our demand and will not give up.”

Al-Monitor tried to call sources from the Egyptian Ministry of Culture and Ministry of Tourism and Antiquities to comment on the statement, but they were not immediately available for comment.

Bartholdi, the sculptor who designed the statue, is also the sculptor of the Statue of Liberty in New York — and this adds more contradiction to the issue.

“It is really strange. How did he design a statue calling for freedom and at the same time made this statue that is reflecting racism?” Shammaa asked.

To spread the word about the importance of the issue bearing in mind that many Egyptians aren't familiar with the statue, Shammaa appeared on TV talk shows and gave interviews to different local newspapers to inform people about the statue.

“I believe in media power to solve this dilemma,” he said.

Before the current media campaign led by Shammaa, Egypt tried on several occasions to shed more light on this controversial statue in recent years, but to no avail.

In 2017, the Independent Union of Archaeological Workers denounced the French statue. They said in a statement that this work offends the Egyptian civilization and history.

The statement further called on the French government to "take the necessary measures to completely remove this disgraceful work, otherwise we will call for talented artists in Egypt to sculpt thousands of statues that contempt French historic icons and put it in all squares of Egypt and in front of the French Embassy."

A group of Egyptians living in France wrote a petition in 2018 to Macron condemning the statue, saying, "We are surprised and saddened by this tremendous insult to Egypt and its civilization. If it is meant to praise Champollion after deciphering the mystery of the Rosetta Stone, there is no doubt that Champollion did that, and opened the way for knowledge of the history and mysteries of the Pharaohs and ancient Egypt. France could find another way to honor Champollion other than displaying his boot on the head of the Pharaoh of Egypt.”

In 2007, Egyptian influential writer Anis Mansour (1924-2011) wrote in one of his articles for Asharq Al-Awsat that he thought deeply about the meaning of “shoes” for the French since he had seen the statue.

“I looked longer and meditated. I tried to understand what the sculptor wanted. How did France not apologize for such a statue? And what [is] the sculptor’s point of view? I know that I am not the first one to see, be astonished and ask about this statue. But I resume the condemnation, and this time I ask not about the meaning of the statue, but rather the meaning of the boot. It must be that the French boot is different from the Egyptian or the Arab boot … is it cleaner? I only found one explanation, that Champollion had completely managed to decipher the Pharaonic symbols, and it's under his feet. But I was not convinced and did not feel comfort,” he wrote.

The Egyptian government had attempted to solve this issue some years ago.

One of the attempts happened in 2014. Former Culture Minister Gaber Asfour told Al-Monitor that when he was in office at the time, he sent an official letter to his French counterpart demanding the removal of the statue. “At that time, I was confident that the authorities there would respond. But this did not happen. I didn't receive any reply from them,” Asfour said.

Asfour believes that it is appropriate for the French side to think of a way to erase the confusion and misunderstanding caused by this statue, which has no value.

“They can change its location and put it in one of the archaeological storage places away from public eyes, especially since it does not have a significant artistic value. The statue does not reflect the French people’s passion for the Egyptian civilization and the Egyptian citizens in general,” he added.

France is one of the country’s main partners in the archaeological domain, operating through three permanent archaeological centers including the French Institute of Oriental Archaeology in Cairo. There are over seven French missions operating in Egypt.

In 2019, Egypt and France launched the France-Egypt Cultural Year, in which both countries celebrated the mutual historical and cultural ties through many artistic events.

Shammaa concluded that if France refuses to remove the Champollion statue, “The [Egyptian] government should prevent French missions from excavating antiquities here until they remove it.”