After bringing down statues, symbolic of racism and oppression in the US and the UK during the Black Lives Matter protests, some social media activists started calling for the demolition of the Pyramids, basing their argument on the contested notion that they were built by slaves. 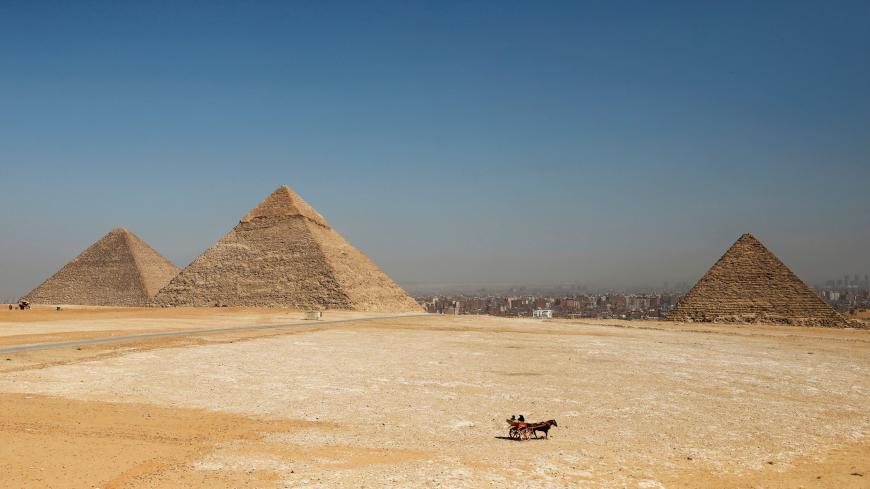 Tourists ride a horse-drawn cart in front of the Great Pyramids of Giza, on the outskirts of Cairo, Egypt, March 8, 2020. - REUTERS/Mohamed Abd El Ghany

The hashtag #pyramids has been widely circulating on Twitter in recent days, but not for the reasons one might expect. The fact that Cairo is preparing to reopen the country for tourism within weeks or that many travelers are eagerly waiting for the coronavirus threat to subside, to visit Egypt — if only to feast their eyes on the centuries-old monuments in Giza — has little to do with the viral hashtag.

Oddly enough, the Pyramids have instead been cited multiple times in an online discussion between Twitter users on whether or not these massive structures built as tombs for the pharaohs of Egypt's Old Kingdom more than 4,000 years ago should be torn down for allegedly having been built by "slaves."

"Take down the #Pyramids. Slaves built them!" was one tweet advocating destruction of the monuments that have stood the test of time.

Nigel Hetherington, archaeologist and founder of Past Preservers, a heritage consultancy, dismissed the calls as "not serious," saying, "I don’t think that those were ever real calls to pull down the Pyramids."

"The image of thousands of slaves toiling under a burning sun and a vicious pharaoh is hard to shake, it seems. Despite years of study and archaeological research and discoveries, the Hollywood version of Egypt still seems to captivate people," he told Al-Monitor.

While it was unclear if the comments were sarcastic, they provoked a backlash from critics who refuted the fallacy, with some urging the social media users spreading such ideas to "read history."

Dismayed Egyptians chipped in defending the funerary monuments that are an important part of their cultural heritage and history against what some perceived as real threats.

"The Egyptian Pyramids are now being used to discredit protests against racism, colonialism and slavery with the argument they have been built exploiting forced slave labor. They were not," Jens Notroff, a German archaeologist, counter-argued on his Twitter account.

The online debate was triggered by the toppling of statues in the United States and in the United Kingdom perceived by anti-racism protesters as symbols of racism and colonialism. The protests that started in the United States in late May have since reverberated across Europe and other parts of the world. On June 7, a statue of Edward Colston, a 17th-century slave trader, was pulled down by protesters in Bristol, England, before being thrown in the harbor. The move followed similar acts of vandalism in the United States. On June 6, Black Lives Matter protesters used ropes to pull down a statue of Williams Carter Wickham, a Confederate general, in a university campus park in Richmond, Virginia.

A number of other monuments have also been defaced or spray-painted in the otherwise peaceful protests, sparked by the May 25 killing of George Floyd during his arrest by four police officers over alleged forgery in Minneapolis, Minnesota.

But Katie A. Paul, an America anthropologist and co-director of the Antiquities Trafficking and Heritage Anthropology Research Project, draws a distinct line between the toppling of the statues emblematic of racism and oppression and the online calls to destroy the Pyramids, which she said "are steeped in false understanding of their history and construction." She warned that such calls "set a dangerous precedent where misinformation would drive historical destruction. "

"The statues toppled in the United States and Europe are symbolic representations that deify slave owners and genocidal leaders. They are being removed or vandalized today because they idolize figures who committed the worst kind of oppression," she explained in an email to Al-Monitor. "The Pyramids were not constructed to idolize slavery or genocide nor do they serve as monuments to revere an era of oppression."

She continued, "The Great Pyramid of Giza represents the same thing now that it was meant to when it was first constructed: an unmatched feat of human ingenuity."

The calls for demolition of the Pyramids also caused alarm among some Egyptian archaeologists like Monica Hanna who called them "dangerous" and "irresponsible."

"Such calls are reminiscent of similar calls made by some extremists in 2012 to destroy Pharaonic monuments or cover them in wax in the conviction that the Pharaonic civilization was corrupt and deserved to be destroyed," said Hanna, who is acting dean of the College of Archaeology and Cultural Heritage at the Arab Academy for Science, Technology and Maritime Transport.

She was referring to ominous threats against the Sphinx and the Pyramids made by radical Sheikh Morgan Al Gohary. In an interview broadcast on the Egyptian privately owned channel Dream TV in November 2012, the Salafist cleric boasted about taking part along with the Taliban in the demolition of the Bamiyan Buddhas in Afghanistan in March 2001. He suggested covering the Pharaonic monuments in wax, arguing that Sharia advocates the destruction of every pagan and idol. His controversial remarks shocked Egyptians at the time, fueling fears that the country's cultural heritage was under threat under Muslim Brotherhood rule.

Hanna also rebutted the false claim that the Pyramids were built by slaves, which she said are rooted in Biblical tradition.

"The Pyramids were built by Egyptian workers recruited from all over the country during the inundation season when the peasants would temporarily cease work on the farmlands," she told Al-Monitor.

"We have the papyrus logbooks of the workers and we have found the tombs of the workers from which we know that the workers were fed meat, had access to medical care and were paid in rations of bread and beer," she said. The papyrus logbooks she referred to are the Diary of Merer discovered in 2013  by a French mission working under the direction of the Sorbonne University in Paris. The journal of a previously unknown official of the same name chronicles the daily activities of stone transportation from the Tura limestone quarry to the Pyramid site in Giza.

"Building the Pyramids was also a project of faith as the Egyptians believed the Pharaohs were the divine intermediaries between the Gods and the people, so they were building a house for the eternal life of these religious leaders and Heads of State," Hanna added.

In response to the calls for demolition of the Pyramids, some Twitter users shared their photographs with the Pyramids as a backdrop from their holiday trips to Egypt, starting an impromptu campaign that may attract more visitors to Egypt once the country resumes international flights. Tourism is one of Egypt's most important sources of income, accounting for around 12% of the country's gross domestic product.