Archaeologists complain of a devastating and ongoing security failure as violations of Egypt’s most famous sites continue. 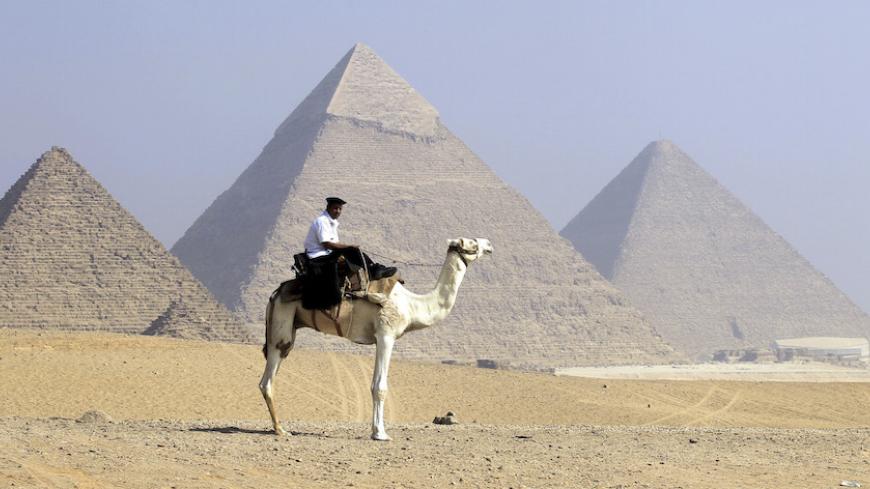 A security officer patrols the three pyramids at Giza on his camel in Cairo, Oct. 1, 2012. - REUTERS/Mohamed Abd El Ghany

CAIRO — Inadequate security systems are putting the most famous archaeological sites in Egypt in jeopardy. The Giza pyramids, one of the seven wonders of the world, are particularly at risk. Successive incidents have heightened security concerns, the latest being the March 2015 Freemasonry parties in the chamber of King Khufu in the Great Pyramid outside work hours, in clear violation of Egypt's laws controlling archaeological sites. Before that, an adult movie was shot in Giza, where the surveillance cameras were out of service. News of the infraction circulated on March 26, while the prosecutor’s investigation confirmed that the video was shot in 2011.

Egyptian laws prohibit religious rituals in archaeological sites, but surveillance cameras inside the Khufu Pyramid failed to prevent some tourists from lighting candles, taking off clothing and sleeping in tombs. Freemasons reportedly believe that sleeping inside tombs grants them powers and a chance to communicate with the other world.

Day after day, new incidents expose security dysfunctions at these sites. On Jan. 31, three Pharaonic tombs were found floating in a canal, and no one knew where they came from.

Al-Monitor spoke to officials in the Ministry of Antiquities Affairs about the efforts to secure these sites. According to Yousef Khalifa, the head of the archaeological sites department, the ministry is working to set up electronic security systems — one such system was installed March 21 in the Luxor Temple — and will cover the pyramids and the rest of the archaeological sites at later stages.

Khalifa told Al-Monitor, "The new security system relies on high-quality electronic networks to expose any breach in archaeological sites and includes cutting-edge surveillance cameras to track any movement and display it through projectors put in place across the sites."

Khalifa denied the accusations of neglect by the ministry, saying that the level of security was high. According to Khalifa, the security system makes good use of cameras and human resources, such as the tourism and archaeology police, supervisors and monitors. However, he admitted to the inadequacy of the current electronic monitoring system, saying that surveillance cameras were put only in the major sites and not everywhere, but assured Al-Monitor that soon cameras would be placed everywhere they are needed.

Ahmad Shehab, an archaeologist and vice president of the Association for the Protection of Archaeologist Rights, accused ministry officials of failure to secure the sites. He told Al-Monitor, "Warehouses containing the treasures of pharaohs in the different Egyptian museums are being plundered. Many museums were also subject to terrorist attacks, such as the Islamic Art Museum, Malawi Museum and Arish Museum. The ministry is even unable to secure the Giza Pyramids."

He said that 289 archaeological pieces have gone missing from the Aswan Museum, adding, "The warehouses in the village of Mit Rahina were also stolen. Why were surveillance cameras unable to expose the thieves?"

Shehab affirmed that the surveillance cameras set up in the pyramids are inadequate and not equipped with night vision. "If officials are defending the failure to expose the Russian adult movie shot in the pyramids by saying that it was filmed in the area surrounding the pyramids where there were no cameras, why were cameras unable to expose the Masonry parties taking place inside the room of King Khufu outside official working hours, practices that reached the Edfu Temple, according to our information?" On March 26, a number of archaeological inspectors informed the security, monitoring and administrative parties in Aswan about some tourists practicing strange rituals.

Shehab questioned the official position on the illegal erecting of buildings near archaeological sites in Fatimiyah and vandalism of many touristic sites there and at Dahshur, as well as the digging and plundering of items from Pharaonic tombs and their sale at public auctions, often in Tel Aviv.

In his interview with Al-Monitor, Shehab spoke for the Protection of Archaeologist Rights in calling for a directorate within the Ministry of Antiquities Affairs tasked with protecting archaeological sites in coordination with the Ministry of Interior. Shehab suggested strict punishment for violations.

The Ministry of Antiquities Affairs seems unwilling to admit failure, but the Egyptian government should take action to ensure that archaeological sites do not end up easy prey to terrorist attacks, particularly since the Islamic State has been targeting such sites, as happened most recently at Tunisia's Bardo National Museum on March 18.