How Egypt plans to crack down on antiquities theft

Archaeologists and others say that changes to Egypt's antiquities law, if applied properly, will reduce the theft of artifacts and also make the lives of tourists more hassle-free. 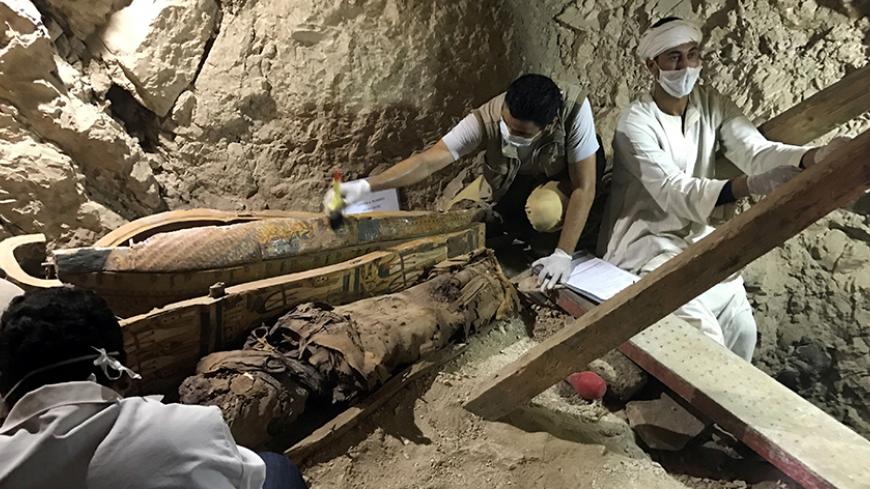 Egyptian antiquities workers are seen in a recently discovered tomb of Userhat, a judge from the New Kingdom at the Dra Abu-el Naga necropolis near the Nile city of Luxor, Egypt, April 18, 2017. - REUTERS/ Mohamed Zaki

On May 3, Egypt's Cabinet approved amendments to the country’s antiquities law. The changes were highly praised by decision-makers and archaeologists in a country that has been suffering a rise in antiquities thefts and illegal digging for artifacts following the 2011 revolution.

The amendments include raising the maximum sentence from seven years to life imprisonment for the illegal trade in, possession of and digging of antiquities. An addition to the law also imposes fines for harassing tourists at archaeological sites; such fines range from 3,000 to 10,000 Egyptian pounds ($165 to $550).

Egypt's antiquities law, which was first passed in 1983, was amended twice in 2010 to stiffen penalties. The new amendments are pending parliamentary approval.

Archaeologist Sherif Fawzi told Al-Monitor that stiffening the penalty is a long-awaited and good move to preserve Egypt's heritage.

"The illegal trade in and smuggling of antiquities are major crimes against our country, just like terrorism. These must be punished by the most severe penalties as a deterrent to preserve Egypt's identity and civilization," Fawzi said.

There have been a number of recent cases of antiquities' violations.

Last month, Egypt's administrative prosecution referred dozens of former employees of the Antiquities Ministry to trial for allowing members of a German archaeological expedition to steal samples from the Giza Pyramids.

According to investigators, these employees let the German group illegally take a piece of a cartouche from a small chamber above King Khufu's burial room and also some fragments from the walls and ceiling of Khufu's tomb in the Great Pyramid. The group used sharp tools while taking the samples, so the pyramid walls were damaged.

On March 9, security forces in Minya governorate arrested a farmer carrying 287 pieces of antiquities and coins dating to the Greco-Roman era while he was trying to sell them to clients in return for a large sum of money.

She told local media that archaeological and touristic places in Egypt attracted 9.5 million tourists in 2015, compared with 14.7 million in 2010.

"These amendments will help tourism flourish and make the world look at us and see us as more civilized, seeing that we respect everyone who comes to see our archaeological monuments," she said.

The legislator appealed to authorities such as the tourism police to implement the laws and the new decisions once they are formally approved and take effect.

Mohamed Khalil, a director at the Antiquities Ministry, hailed the amendments and said he hoped that they would be strongly implemented.

He told Al-Monitor that the Antiquities Ministry is also working hard to raise people's awareness about their country's invaluable antiquities.

"After the revolution, the ministry organized tours for Egyptians for them to see their ancestors' antiquities. To our surprise, many Egyptians have no idea about dozens of archaeological places here," Khalil said.

"In most of our tours, passersby and shop owners, when they see us walking in groups, think we are demonstrating," he said.

However, Khalil went on to say that when people are informed that the group is going to visit a historic place nearby, some of them join in, while others are surprised that such a place exists in their area and is open to the public.

Thus, Khalil believes that it is good to stiffen the penalties but also to raise people's awareness — especially of those trying to sell goods to tourists — about the importance of Egypt's monuments so that they will be preserved. He said he thinks that illegal trade and digging cases will diminish.

Pedro, a Spaniard who works as a Spanish teacher in Cairo, praised the new amendments, especially the one imposing fines for the harassment of tourists.

"I totally agree with and am happy with these penalties," he told Al-Monitor.

He said he sometimes is exposed to harassment from some sellers in the pyramids area, while saying that in general, "Egyptians are so kind."

"I am always roaming the streets and love taking pictures of mosques and ancient alleys," he added.

Pedro said he loves visiting Egypt's historic sites and takes Spanish friends on tours of them.