The Egyptian government will attempt to hold on to its antiquities amid a religious edict giving ordinary citizens the right to excavate and keep such treasures. 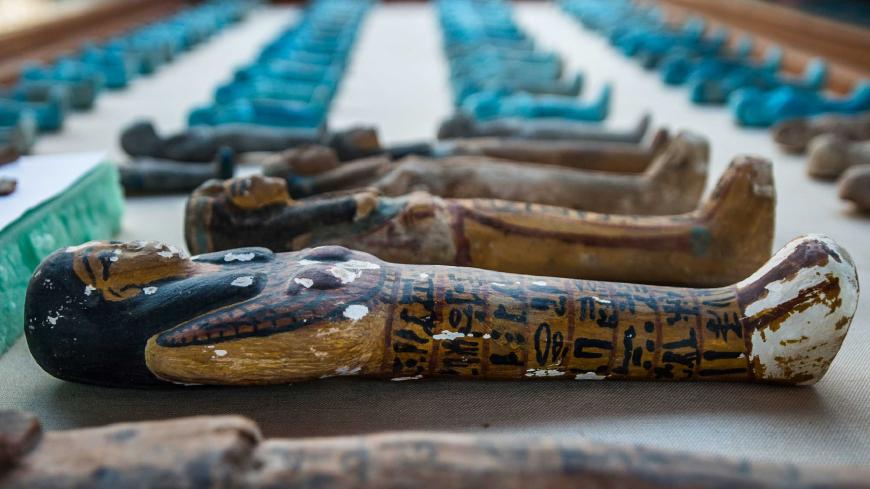 Small funerary statues carved in wood, clay and limestone were found at the site of a newly uncovered ancient tomb in the Draa Abul Naga necropolis on the west bank of the ancient city of Luxor, Egypt, Sept. 9, 2017. - KHALED DESOUKI/AFP/Getty Images

A recent religious edict allowing ordinary Egyptian citizens to illegally excavate and keep antiquities and treasure from their own land has triggered an uproar from the country’s government officials and moderate religious scholars.

Early this month, Abdel Hamid el-Atrash — former head of the Edicts Committee at Egypt’s top Islamic body, Dar al-Ifta — said that it is the right of any individual who finds gold or treasure on his or her own land to keep it, provided they offer part of the value to charity, the semi-official daily newspaper Al-Ahram reported.

Moderate scholars have strongly criticized the scholar’s opinion, saying that such a religious edict paves the way for individuals to illegally search for treasure and antiquities on their own land, overtaking the government's role of excavating artifacts.

“Gold and treasure are considered antiquities. Those are historical things and are regarded as part of the Egyptian civilization and heritage,” Amna Noseir, professor of Islamic Studies at Al-Azhar University, told Al-Monitor.

Noseir said that such edicts give ordinary citizens a religious pretext to illegally excavate for antiquities, which are a national wealth. “Individuals should instead hand over those gold pieces or treasures immediately to the government because treasures and antiquities are owned by the state as long as they are found within its territories,” she added.

In his argument, Muslim scholar Atrash referred to the story of a man who purchased a plot of land during the time of Prophet Muhammad and shortly afterward found a piece of gold on it. The man then gave the piece of gold to the previous landowner. However, the seller told him that the piece of gold was no longer his own because he already sold him the plot of land, Atrash said.

“The story proves that any individual has the right to take anything [they find] on their own land,” Atrash added.

Former Minister of Antiquities Zahi Hawas labeled Atrash’s edict as “illogical,” saying the Egyptian law asserts that everything falling within the state’s territories belongs to it. “The man who issued such an edict has to undergo mental checks because his statements are totally against logic,” Hawas told local media.

Atrash’s edict comes despite an existing law that prohibits the illegal trade of antiquities.

No law criminalized the illegal excavation of antiquities until 1983. However, in that year, the Egyptian parliament passed a law sentencing violators to between five and seven years in prison and imposing on them fines of up to 7,000 Egyptian pounds.

The law has nonetheless been criticized for its light punishment and fines. Many archaeologists and experts have called on the government to toughen penalties against unauthorized searches for antiquities because they have become widespread in the past years.

In May this year, Egypt’s Cabinet approved some amendments to the law, raising the maximum sentence for illegal trade in antiquities from seven years to life imprisonment.

Antiquities theft cases escalated in the wake of the January 25 Revolution that toppled former President Hosni Mubarak and caused a security lapse. Museums and archaeological sites were robbed during clashes and demonstrations that took place following the revolt.

A major antiquities theft incident took place at the Malawi National Museum in August 2013 following the dispersal of two sit-ins in support of former President Mohammed Morsi in Rabaa al-Adawiya and al-Nahda squares. More than 1,000 objects were stolen from the museum, government officials said.

According to the International Coalition to Protect Egyptian Antiquities, a US-based initiative that partnered with the Egyptian Ministry of Antiquities, antiquities worth approximately $3 billion have been looted between 2011 and 2014.

As the government makes such noticeable yet slow gains against the practice, edicts like that of Atrash are seen as undermining the state’s efforts.

“Although the edict is not the first of its kind, it is significant because it comes from a man who used to belong to Dar al-Ifta, Egypt’s top religious institution that issues religious edicts to advise Muslims on spiritual and life matters,” said Abdel Fattah el-Banna, professor of restoration of archaeological sites at the Faculty of Antiquities, Cairo University.

“Edicts like that of Atrash used to be issued by people who do not belong to Al-Azhar [Dar al-Ifta is an affiliate], and we used to deal with them as extremists,” Banna told local media. People must understand, Banna added, that the law and the religion prohibit individual excavation for antiquities, and whatever is found on any plot of land is the property of the state — not of the individual.