Egypt’s Dar al-Ifta issued a fatwa charter promoting practices that are environmentally friendly based on Islamic law, as Egypt gears up to host the UN climate summit next month. 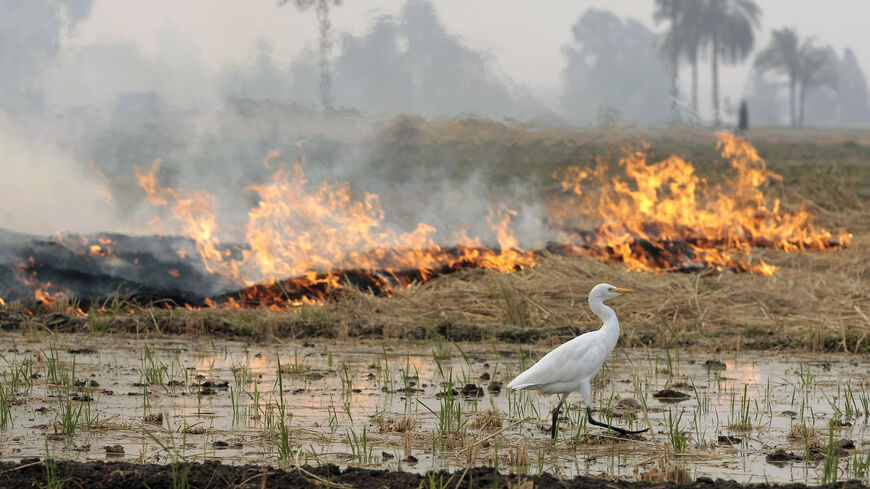 An egret wades in a rice field close to a pile of burning hay near the Nile delta town of Zagazig, north of Cairo, Egypt, Oct. 23, 2009. - Cris Bouroncle/AFP via Getty Images

CAIRO — Egypt’s Dar al-Ifta, which is responsible for issuing religious edicts (fatwas), recently approved the first fatwa charter for the fight against climate change based on Islamic law (Sharia) principles.

The move came as part of Dar al-Ifta’s contribution to the implementation of sustainable development goals, resolution of climate change problems and raising awareness of the danger of climate change from a religious perspective.

The charter was launched Oct. 8 during Dar al-Ifta’s seventh international conference titled “Fatwa and Sustainable Development Goals,” ahead of the United Nations climate change conference (COP27) that will be held in Sharm el-Sheikh in November.

The charter includes several fatwas to be implemented in accordance with Islamic law, including prohibiting the use of hazardous materials and waste, excessive energy consumption, encroachment on agricultural land, the use of pesticides and compound chemicals without respecting the terms of use and dumping waste into the oceans.

The charter also defined some environmentally harmful actions that are banned based on religious principles, including the hunt and killing of birds, wild animals and marine creatures, as well as cutting or destroying plants and open waste burning.

He explained that the charter is tantamount to an agreement among the world’s top muftis to prohibit what has been proven harmful to the environment and to strive to confront the repercussions of climate change and take part in helping those affected.

Omran noted that it is necessary for Dar al-Ifta to participate in the resolution of human problems, which is part of the Islamic religious discourse. The international organizations focusing on the climate are aware of the importance of developing a rational religious discourse to get rid of bad behavior, he added.

The UN Environment Program states, “Spiritual leaders at all levels are critical to the success of the global solidarity for an ethical, moral and spiritual commitment to protect the environment and God’s creation.”

It seems Egypt’s Al-Azhar has also adopted the UN vision, as it has launched several programs and initiatives designed to protect the environment, most recently the "Our Climate is Our Lives" initiative announced in August that defines Al-Azhar’s vision in facing climate change.

He said, “It is necessary to continue to discuss the development and modernization of Dar al-Ifta’s tools to keep pace with societal and climatic development and the evolution of people’s lives, particularly since Islamic jurisprudence is flexible.”

Dar al-Ifta’s fatwa charter is important because it is the first international document that promotes the criminalization and prohibition of environmentally harmful practices based on Islamic law, particularly those that are very common in Egyptian society such as encroachment on agricultural lands, pollution of water sources and waste burning. Societal awareness may be boosted with the adoption of a religious discourse that prohibits these practices.