Archaeological experts say social dislocation and terrorism are increasing the ability of organized gangs to traffic artifacts to clients in Europe, Asia and the United States. 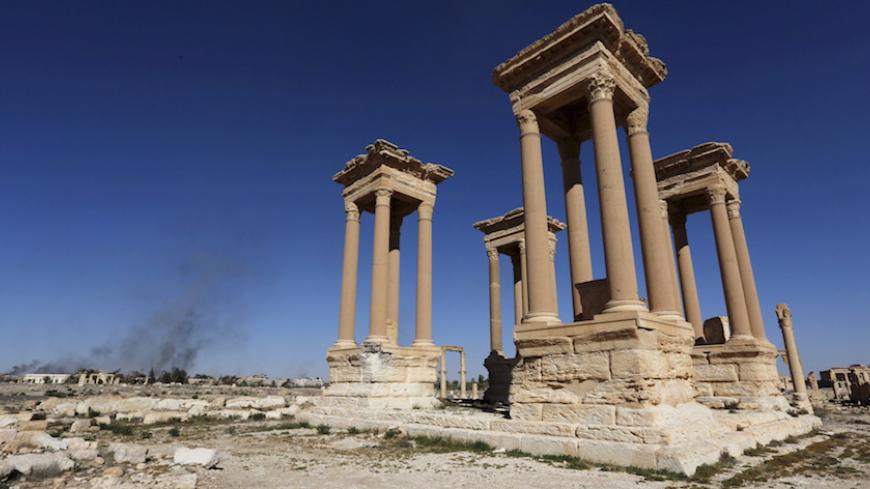 Smoke rises from the modern city as seen from the historic city of Palmyra, in Homs Governorate, Syria in this April 1, 2016 file photo. - REUTERS/Omar Sanadiki/Files

While world attention focuses on the recent liberation of Palmyra and devastation the Islamic State caused to that ancient site in Syria during a lengthy occupation, looting and trafficking of antiquities is on the rise throughout the Middle East.

Social dislocation and economic crises in the wake of the 2011 Arab Spring uprisings have increased the incentive for ordinary people to pilfer precious artifacts in Egypt, Yemen and Libya. At the same time, groups such as IS and al-Qaeda are profiting from trafficking these items through organized networks primarily to private collectors in Europe, Asia and the United States.

Monica Hanna, an Egyptian archaeologist, told a Washington think tank via Skype on April 7 that the security crisis accompanying the 2011 revolution against President Hosni Mubarak triggered a “gold digging fever in Egypt.” While the situation has improved somewhat, she said, archaeological sites are still not under control.

Organized gangs are looking for specific types of objects that run the gamut from pre-dynastic treasures to Coptic manuscripts, Islamic art and pieces from the era of the 19th century Egyptian ruler Muhammad Ali, she said.

“Each time period has its own client,” Hanna told the Woodrow Wilson International Center for Scholars. Much of the loot winds up in Turkey en route to Europe and the United States, or in the case of Islamic art, the Persian Gulf states, she said.

In a recent interview with Al-Monitor, Egypt’s former minister of antiquities, Zahi Hawass, also blamed “security turmoil in the aftermath of the January 25 [2011] revolution” for the explosion in illegal excavation in Egypt. In addition, Hawass cited the decline of tourism, which he said had cut funding to government antiquities bodies for protection and development of museums and archaeological sites.

Experts fault the demand side of the equation and lax enforcement by Western countries of laws that bar trafficking in looted antiquities.

Tess Davis, executive director of the Antiquities Coalition, a Washington-based non-profit, noted that “the US has laws but we need to use them.” Too often, she said, antiquities’ trafficking is treated as “a victimless white-collar crime if it is treated as a crime at all. This did not start with Daesh [IS] and they won’t be the last,” she said.

IS looting of artifacts in Syria and Iraq has become a major source of income for the terrorist group and has thus attracted interest from anti-terrorism authorities. The UN Security Council unanimously passed a resolution more than a year ago calling upon all countries to block Syrian antiquities, Davis said, but the US Congress has yet to pass implementing legislation.

She urged the Barack Obama administration to use its executive authority in the meantime to impose emergency import restrictions and to treat antiquities trafficking that originates with IS as a terrorist financing crime, not just a crime against cultural heritage.

She also praised authorities in New York City who have been using state laws to go after dealers in illegal cultural goods. During a recent Asia Week event in New York, Davis said, police conducted a daily raid on auction houses and dealers to ferret out trafficked items before they could be sold.

Alexander Nagel, a research associate at the Smithsonian Institution, told the think tank audience that he has been working with US customs and immigration authorities to train them in spotting illegally trafficked antiquities. One positive development, he said, has been the creation of so-called “red lists” of artifacts belonging to major archaeological sites in the Middle East.

Davis said the advent of cellphone aps such as Snapchat and Instagram have helped experts document looting at Palmyra and other major venues. “Statues looted from Palmyra wound up at an auction at Raqqa” recently, she said, and were identified through these digital means.

Most of the illegal items are bound for collections that will not be viewed publicly for a long time, if ever. One challenge, Hanna said, is to raise awareness among those purchasing these pieces that “it is uncool to buy antiquities looted from the Middle East.”

Auction houses also need to be more vigilant, the experts said, and make sure that items are acquired from legitimate vendors and approved for export by government authorities when possible.

Given the degree of death and destruction in countries such as Syria, Iraq, Yemen and Libya, policing archaeological sites may seem like a minor priority.

Iris Gerlach, an expert on Yemeni and Ethiopian antiquities, said it is vital to raise awareness among local populations that they are losing their heritage by allowing artifacts to be “wrenched from the ground” and divorced from their historical context.

Ultimately, however, it will be difficult to stop the trade when local people have few other options and a single page of a medieval Quran can fetch $25,000, Nagel said.