Congress deals blow to IS looting in Syria

The House passed legislation that would make it illegal to import stolen artifacts. 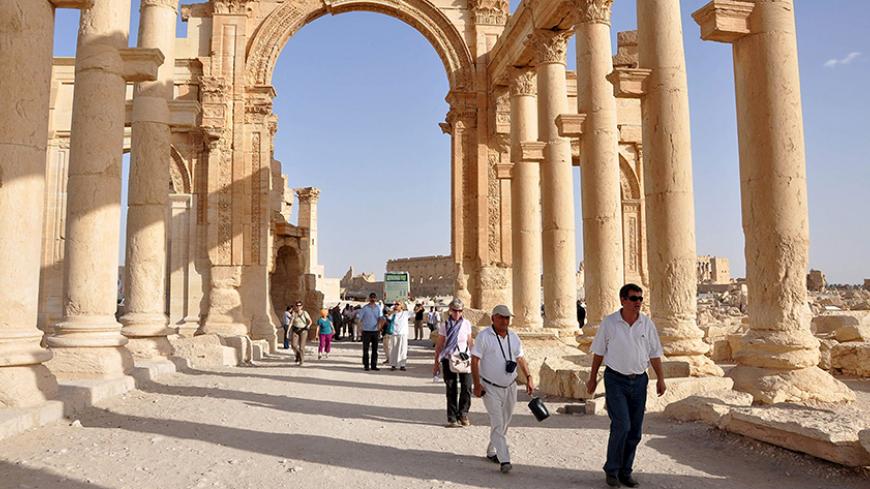 Tourists walk in the historic city of Palmyra, Sept. 30, 2010. Islamic State fighters in Syria have entered the ancient ruins of Palmyra after taking complete control of the central city, but there are no reports so far of any destruction of antiquities, a group monitoring the war said on May 21, 2015. - REUTERS/Nour Fourat

House lawmakers passed legislation June 1 that would make it illegal to sell looted artifacts from Syria, dealing a blow to the Islamic State’s finances and agenda.

The unanimous vote comes amid a worldwide effort to draw attention to the extremist group’s attempt to erase any trace of other faiths. Officials are also worried that the looting, aided by purchases from unscrupulous buyers in the United States and elsewhere, is contributing tens of millions of dollars to Islamic State (IS) coffers.

“By now we’ve all seen footage of [IS] extremists taking sledgehammers to ancient, irreplaceable artifacts across the territory they control,” bill sponsor Eliot Engel, D-N.Y., said in floor remarks before the vote. “These are not random acts of vandalism. We are witnessing a deliberate campaign to rewrite world history. From the Tomb of Jonah in Mosul to Yazidi shrines in Sinjar, [IS] is leveling sites that preserve a record of the region’s rich and diverse past.”

Engel’s bill, which has yet to be introduced in the Senate, calls on the State Department to create a red list of objects at risk of looting that customs officials and art dealers should be on the lookout for. Illegally imported objects could also be seized, with the hope that they could one day be returned to Syria.

“What’s going to happen is it will raise awareness among buyers, collectors, which will ultimately decrease the market. It will make it harder for middlemen to make their profit … and will eventually make them less willing to deal with IS,” said Erin Thompson, an assistant professor of art crime at the John Jay College of Criminal Justice who has advocated for such restrictions. “So it’s not going to have an effect tomorrow, but it will have a much-needed effect in the months and years to come. Syria and Iraq have thousands and thousands of archaeological sites, so the looting could go on and on and on.”

Minority groups from both countries have been clamoring for help in preventing the looting and destruction of their heritage.

“Not only have we been robbed of our homes, property and land, but our heritage is being destroyed as well,” Sister Diana Momeka of the Dominican Sisters of St. Catherine of Siena in Mosul testified before the House Foreign Affairs Committee last month. “Uprooted and forcefully displaced, we have realized that [IS]’s plan is to evacuate the land of Christians and wipe the earth clean of any evidence that we ever existed. This is cultural and human genocide.”

The UN Educational, Scientific and Cultural Organization (UNESCO) has been at the forefront of efforts to preserve Syria’s history for the sake of future generations. The organization notably pushed for a February UN Security Council resolution that calls on member states to combat looting of Syrian and Iraqi artifacts.

“This is a threat to the memory of humankind, and it’s a threat to the identities of people in these communities who are tied to these sites,” said UNESCO spokesman George Papagiannis. “We’re talking about sites that are important to communities today — it is part of their cultural identity, it unifies people across other divisions that they might have and also these sites in many ways play a significant role to the economic health of these communities, providing a sustainable economy that’s built around cultural heritage.”

Trafficking in looted antiquities is already covered by legal instruments such as a 1970 UNESCO Convention and a 1983 US law implementing the convention. The US law requires an agreement with the source country, however, a non-starter in the case of Syria because of the lack of bilateral relations with President Bashar al-Assad’s government.

Instead, the Engel bill would put the State Department in charge of establishing such a list and making ensuring that other US agencies are doing their part to combat looting. Related legislation from Rep. Bill Keating, D-Mass., calls for improved cultural property training for the Department of Homeland Security, which controls US Customs and Border Protection. The two lawmakers also collaborated on a March 30 letter urging the Treasury Department to quickly “promulgate regulations imposing sanctions on importers of cultural property unlawfully removed from Syria.”

Already, the State Department’s Cultural Heritage Center has helped the International Council of Museums create a red list of Syrian cultural objects at risk. That effort has helped inform legitimate actors such as museums, but is not legally binding on unscrupulous buyers and sellers.

The Penn Cultural Heritage Center at the University of Pennsylvania and the Syrian Interim Government’s Heritage Task Force have also provided their expertise to help protect Syria’s cultural treasures. In cooperation with the American Association for the Advancement of Science, they’ve been able to assess the damage to Syria’s World Heritage sites using high-resolution satellite imagery to help inform the debate.

The European Union has gone further, enacting prohibitions on the trade of “Syrian cultural property goods and other goods of archaeological, historical, cultural, rare scientific or religious importance” believed to have been looted in December 2013. The international intergovernmental Financial Action Task Force has been calling for more such restrictions.

“[IS] makes money in two ways from antiquities, both through selling looted artefacts and taxing traffickers moving items through ISIL-held territory,” the group said in a February report on "Financing of the Terrorist Organisation Islamic State in Iraq and the Levant." It says, “The financing for the buying and selling of tainted antiquities can be disrupted [at] auction houses, financial institutions, and other legitimate businesses involved in the antiquities trade, by urging these institutions to adopt or implement policies that require clear, certified documentation that identifies the origin of the artefacts. Banks should refrain from processing transactions for antiquities that originate in Iraq or Syria. Steps could be taken to ensure that private sector actors have a better understanding of the sites in Iraq and Syria that are being plundered and of the routes that are being used. In addition, dealers in the antiquities realm could be urged to report suspicious behavior, fraudulent paperwork or knowledge of stolen artefact circulation.”