International action is required to stop the plundering of Middle Eastern treasures and the devastation of historic sites. 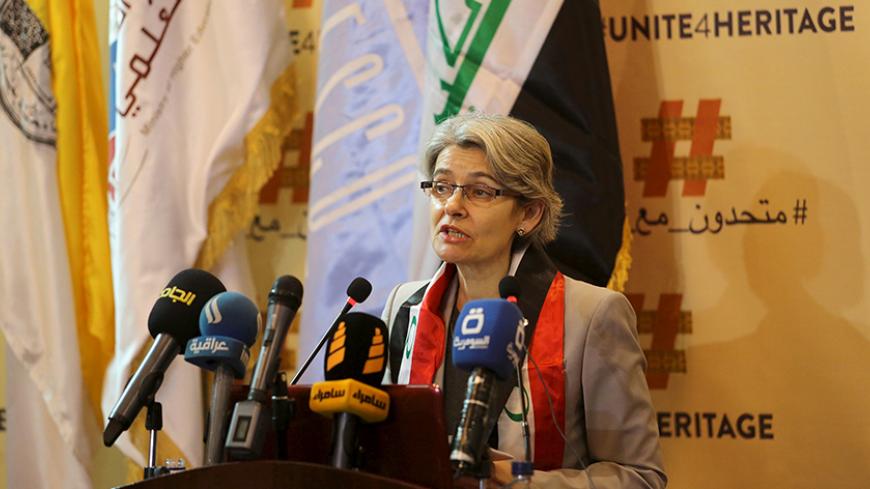 The international community is appalled by the scale of destruction of unique ancient monuments of Middle Eastern cultures and the shameless trafficking in cultural artifacts pillaged in territories controlled by the Islamic State, al-Qaeda and other radical militant groups. Irreparable damage is also taking place in areas that have become war zones where combat aircraft and artillery are used in the course of coups, interventions and internal conflicts.

Archaeological landmarks of unique value to humanity have been destroyed and looted in Iraq, Syria, Yemen and Libya. It would be a mistake to believe that this process did not start until after the Arab Spring of 2011. Coalition forces failed to prevent the destruction and looting of valuable relics by militants in Iraq after a 2003 invasion that created a power vacuum there. According to Mostafa Amin, chairman of Egypt’s Supreme Council of Antiquities, more than 170,000 Iraqi artifacts have been stolen and smuggled during the conflict in Iraq since that time.

However, this cultural devastation reached truly tragic proportions only after jihadi fanatics took control of a number of territories in the Arab world. Three trends can be identified in this recent process of destruction and looting of the cultural heritage of the Arab states.

First, it is a systematic destruction of monuments resulting in an irretrievable loss of entire layers of humankind’s cultural heritage. In some instances, this destruction is purposeful and planned, as was the case with the ancient Parthian city of Hatra in Iraq (founded in the third century B.C.), a UNESCO World Heritage site that was razed to the ground by IS barbarians. In another case, Akkadian and Assyrian antiquities from the once-vast collection of the Mosul Museum were destroyed. There are many other notorious examples of the destruction of monuments in Iraq and Syria. Also, these bigots have not spared numerous mosques that did not conform to their dogmatic standards.

In certain situations, the destruction is collateral damage from hostilities — bombing raids, shelling and ground operations. One graphic example is in Yemen, where an offensive launched by Ansar Allah, or the Houthis, and their allies in February sparked ground clashes between the opposing groups. The clashes were followed by airstrikes from a Saudi-led coalition, resulting in catastrophic humanitarian fallout. Shelling the night of May 11 and the morning of June 12 resulted in the destruction of historical buildings and monuments in the Maqshamat Al-Qasimi neighborhood of the Old City of Sanaa, one of the most fascinating ancient towns of Arabia and another World Heritage site.

According to a UNESCO report quoted at the Experts Meeting on the Safeguarding of Yemen’s Cultural Heritage, held July 15-16 at the organization’s Paris headquarters, a splendid museum in Damara was completely destroyed May 12. The Great Dam of Marib, a unique landmark of the Kingdom of Saba considered by many to be the Eighth Wonder of the World, was seriously damaged June 2 and, the same day, the domed mausoleum of al-Habib bin Sheik Abu Bakr bin Salem in Hadhramaut was completely destroyed. A similar fate is likely to await all the other strikingly beautiful tombs of holy men that ended up in the area controlled by al-Qaeda jihadists who denounce these monuments as "shirq" — idolatry or a departure from the worship of the one and only god. At the same time, as UNESCO Director General Irina Bokova said at the meeting in Paris, “This heritage bears the soul of the Yemeni people, it is the symbol of a millennial history of knowledge and it belongs to all humankind."

There is ongoing systematic destruction of anthropomorphic and zoomorphic sculptures that the IS doctrine considers to be idols that have no place in the raving extremists’ hideous “state,” based on grossly distorted Islamic beliefs.

The second trend involves illegal and chaotic excavations designed to loot valuable artifacts for sale and at the same time destroy important landmarks of pre-Islamic civilizations. Initially, barbaric and disorderly archaeological digs in IS-controlled territory were conducted by criminal gangs, but the situation seems to have changed over time. Efforts to maximize the proceeds from this criminal activity have made it somewhat systematic. The IS militants established a ministry of artifacts after they took control over the city of Tadmor in May. А webpage, created under the name “Syria’s Artifacts for Sale,” displays some of the precious artifacts that were looted from museums in Halab, Deir ez-Zor and Qalamoun — statues, jewelry, precious stones and coins. A researcher from Tajikistan, speaking on condition of anonymity, told Al-Monitor that IS emissaries are recruiting archaeologists in the region, and probably in other countries as well, to conduct illegal excavations in IS-occupied territories in Iraq and Syria. According to the Regional Center for Strategic Studies in Cairo, experts from neighboring countries, including Turkey, are recruited to conduct excavations in Raqqa, Deir ez-Zor and Idlib, while metal detectors and archaeological extraction tools are brought from along with weapons. Organized excavation teams are formed from Syrian militants.

Also, according to Cairo-based RCSS, IS imposes taxes on excavation operations that are assessed at 20% of the value of artifacts extracted from the city of Halab, and at 50% for artifacts extracted from the city of Raqqa. Gold artifacts of the Islamic era are taxed even more heavily. IS has also been destroying monuments and conducting illegal excavations in coastal Libya, including in the vicinity of Leptis Magna, a famous city founded in 1100 B.C. as a Phoenician colony, only 130 kilometers (80 miles) from the capital, Tripoli. Rich museum collections have also been looted in Libya.

Credit is due to the Syrian government for having evacuated many monuments from the sites targeted by the terrorists, moving them to secure storage facilities in Damascus.

The third trend is the smuggling of antiquities abroad and their sale in the black market, currently one of the main revenue sources for IS. Despite serious efforts mounted by the international community, international organizations and individual countries, including Arab states, to counter an illegal cross-border trade in stolen artifacts, the trade is still flourishing. Stolen artifacts are carried over secret trails across the borders of Turkey, Jordan and Lebanon, and end up in the hands of black-market dealers who deliver them to buyers. According to RCSS experts, particularly valuable items such as weapons with golden ornaments sell for as much as $50,000. In February 2013, Jordanian police busted an underground network of traders in Syrian antiquities that operated on the Syrian border close to the city of Daraa. A similar operation was conducted by Algerian police against a network of dealers in stolen Libyan antiquities in April 2015.

What we are witnessing today is an intolerable situation that calls for concerted and resolute action by the entire international community to stop the destruction and looting of humankind’s cultural heritage in the Middle East. In addition to police and legislative efforts, action is required in the culture domain. The subject appeared on the agenda of the RCSS experts’ meeting in Yemen, hosted by UNESCO and attended by a representative of Russia, Alexander Sedov, curator of the Museum of Oriental Arts. Notably, a Russian archaeological mission has been working in Yemen since 1983. It has conducted archaeological excavations at the ancient settlements in Hadhramaut and on Socotra Island for more than 30 years. Sedov told Al-Monitor about discussions in Paris that included the possible development of a satellite-based system for monitoring loss of and damage to monuments, UNESCO cooperation with specialists on Yemen, the exchange of information on stolen artifacts and implementation of an action plan designed to draw more attention from governments and the public to this vexing problem.