Many calls but little action to stop cultural destruction in Yemen

Smuggled Yemeni antiquities continue to find customers in the West, despite international outcry to stop the looting and destruction in Yemen. 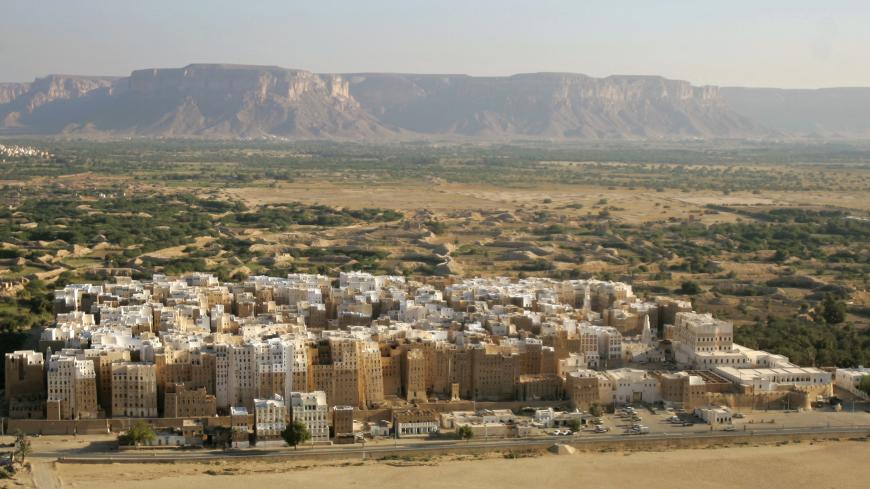 An aerial view of historical city of Shibam, a UNESCO World Heritage site, which is dubbed the "Manhattan of the desert" for its 16th-century tower houses, Yemen, March 18, 2009. - REUTERS/Khaled Abdullah

SANAA, Yemen — The messy civil war that has raged in Yemen for nearly four years has left its mark on the country's political, economic and cultural life. The country’s cultural and historical heritage has been ravaged despite repetitive calls by UNESCO to all fighting sides to do their utmost to protect Yemen's unique heritage.

Yemen is one of the richest countries in the region when it comes to natural, cultural, historical and architectural heritage. It has four sites on the UNESCO World Heritage List: the Socotra Archipelago, the old city of Sanaa, the old walled city of Shibam in Hadramaut governorate and the historic town of Zabid.

Four years ago, at the onset of the war, UNESCO Director-General Irina Bokova described Yemeni heritage as a reflection of “centuries of Islamic thought, rich exchange and dialogue.” She also called on the people of Yemen, as well as on countries in the region engaging in military operations in Yemen, to do all they can to protect Yemen’s invaluable cultural heritage.

Today, it is clear the call had little effect. Yemen witnessed the destruction of 101 heritage and archaeological sites, whether by airstrikes or bombings, according to the country’s General Organization of Antiquities and Museums (GOAM).

Mohanad al-Sayani, the chairman of GOAM, told Al-Monitor that the war caused massive damage to Yemeni archaeological sites. “GOAM has so far identified 66 archaeological sites and monuments that were hit by airstrikes," he said. "Also, 35 religious sites and shrines were destroyed and vandalized by terrorist groups such as al-Qaeda and others, who believe such shrines and monuments are forbidden [by God].”

As a precautionary method, GOAM closed museums and archaeological sites at the beginning of the war and stored some antiquities at safe locations, he said. “But the continuation of this long, drawn-out war threatens many of these historical pieces which are not in a suitable environment,” he added.

“The war has not spared heritage sites across the various governorates of Yemen. Besides shelling [of the monuments and museums], archaeological sites were used as military sites by the warring parties,” Sayani said. “Artifacts were stolen and smuggled. Slum areas were constructed in an arbitrarily and chaotic manner over parts of archaeological sites amid the weakness of government agencies.”

Sayani’s description can be seen on the ground in Aden, a multifaith strategic port city in the southeastern tip of the Arabian Peninsula, between the Red Sea and Gulf of Aden. The city has been home to churches, synagogues and Hindu temples, all serving as witnesses to the diversity that is currently struggling to survive. Half the buildings are now destroyed.

Wadee Aman, director-general of the Aden Heritage Center, a nongovernmental organization, told Al-Monitor, “The war in Aden has caused the destruction and loss of archaeological monuments. The military museum in Aden was used as an arena for military confrontations. Some of its parts were destroyed by artillery shelling. Historical tanks were also shelled.”

Aman continued, “Several monuments have been deliberately vandalized and desecrated. Old churches and temples, attesting to the city’s diversified religious heritage and sectarian and religious coexistence in the ancient period, were set ablaze.”

The Washington Post published an article last month, co-written by Deborah Lehr, the founder and chair of the Antiquities Coalition, and Ahmed Awad Bin Mubarak, Yemen’s ambassador to the United States. The co-authors called for an end to the smuggling of Yemen’s antiquities and their sale in US markets. “Yemen has warned the United Nations and the world of this illicit trade, presenting evidence that al-Qaeda in the Arabian Peninsula militants and Houthi rebels are taking a page from the Islamic State playbook by arming their cause with the plunder and sale of Yemen’s ancient treasures,” they wrote. “Research by the Antiquities Coalition demonstrates that, over the past decade, the United States has imported more than $8 million worth of declared art and antiquities from Yemen. There is reason to suspect that the total is much higher.”

In November, a report by the independent Yemeni group, Mwatana for Human Rights, reiterated the concerns on the destruction of heritage. The report stated that “all parties to the conflict” have been involved in attacks and hostilities against many cultural properties, including archaeological sites and historical landmarks dating back more than 2,000 years.

GOAM Chairman Sayani said the prevailing conditions of war and division among state organs made it very easy to destroy or illegally smuggle archaeological objects out of the country.

“I reach out to all concerned international organizations, because their efforts have the greatest impact on the various parties, to protect Yemen’s antiquities and to urgently cooperate with the GOAM," Sayani said. "Everyone must know that antiquities are not the property of a specific party or a group, but they belong to all Yemenis, and to the entire humanity.”

Since its onset in March 2015, the war in Yemen has affected the country’s present, future and history. Yemen is reeling under one of the worst humanitarian crisis in history: 22.2 million people are in dire need of urgent humanitarian assistance, according to the United Nations. Meanwhile, the warring parties keep fueling the conflict, heedless of the fate of the country or its people.