Historic sites are being destroyed by the civil war in Yemen’s once-peaceful city of Aden, known for its history of diversity and coexistence. 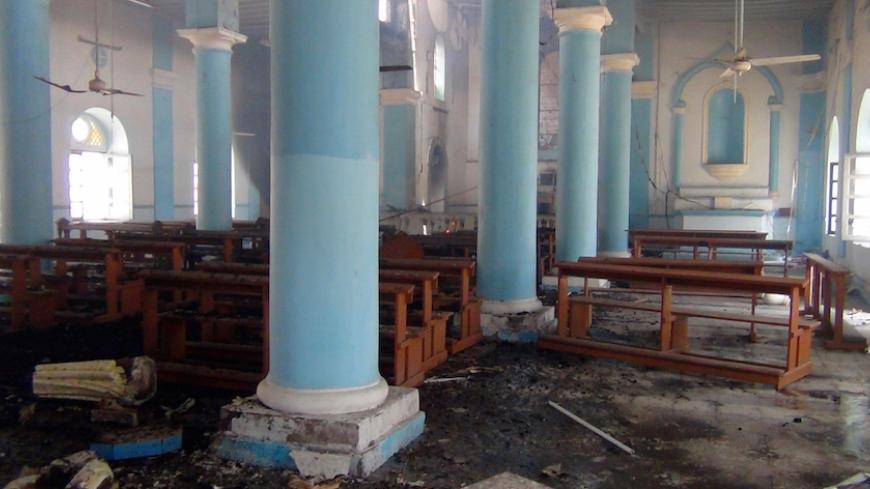 A general view shows destruction inside a Roman Catholic church in the Yemeni city of Aden, after unidentified assailants set the church ablaze on Sept. 15, 2015. - STR/AFP/Getty Images

The Yemeni city of Aden has been a unique case of coexistence and diversity in the region, where numerous groups lived together despite their differing beliefs. The city’s strategic location — along the southeastern tip of the Arabian Peninsula between the Red Sea and Gulf of Aden — made the town an enticing locale for colonial powers. The last occupiers were the British, who ruled the city from 1839 to 1967, and over its history Aden became a meeting point for various nationalities.

Aden boasts important landmarks tied to many historical periods. Its soil is home to churches, synagogues and Hindu temples, all serving as witnesses to the diversity that is currently struggling to survive. These buildings have become targets in a war that has been raging since March between the government forces of President Abed Rabbo Mansour Hadi and Shiite Houthi forces.

Throughout Yemen’s neighborhoods, Muslims, Christians, Jews and people of other denominations and sects lived side by side. Many streets were named after their inhabitants, such as Indian Street, Jewish Street, Somalia Street and so forth, their homes interspersed among the houses of Muslims.

Asmahan al-Alas, a history professor at Aden University, told Al-Monitor, “The city presented itself to the world as one that embraces all people of various sects, doctrines and religions, living in unrivaled coexistence and peaceful fraternity. Aden’s geographic nature and strategic location made it a prime spot for embracing all kinds of people.”

Alas, an official of the Aden Association to Preserve Heritage, added that the city’s natural port made it “a global destination, a world-famous center for trade from the East and the West, where traders stopped on their way to other ports.”

The city’s geopolitical value has earned it various names, including “Gibraltar of the East.” Many people called it the “eye of Yemen” because it is a strategic outlet for the country to the Arabian Sea and the Indian Ocean, according to Alas.

“In Yemen, the diverse cultures of many communities, sects and races came together, whereby the city’s streets transformed into a museum representing various global cultures,” she added. “Mosques coexisted alongside churches and synagogues in a wonderful type of cross-cultural pollination. To this day, they are witnesses to this period, remaining steadfastly in place despite the destruction they have suffered.”

Many of Aden’s cultural sites have been subject to indiscriminate strikes in the ongoing civil war, even though they are not military targets.

Alas listed numerous historical landmarks that have suffered from military operations in the city, including the oldest neighborhood, the Qatia district, which was entirely destroyed. The so-called English Cemetery in Aden’s famed Al-Mualla district was demolished, and the Catholic Church of St. Joseph was burned. The church, the second oldest in the city, was built in 1854.

During the British occupation, Christians built a number of churches in the city, including the Church of St. Anthony and St. Joseph. In 1867, the British began to build the St. Mary Garrison Church, which stands to this day, but is shuttered. Meanwhile, the war has forced aid workers who were offering medical services to locals in the Ras Marbat Church in al-Tawahi district to flee.

On Sept. 15, Islamic extremists burned the al-Badri Church in the Crater District.

Mariam Mohammed, a famed writer from Aden, spoke to Al-Monitor about the destruction and vandalism she witnessed of a number of churches and archaeological sites in the city. These acts were carried out by armed Houthi groups and others claiming affiliation with al-Qaeda.

Mohammed spoke with immense pride about the history of her city, which she said is struggling for survival. “Aden is a unique city — it has been a symbol of love, coexistence and peace since ancient times. It has embraced black and white residents alike, as well as Muslims, Christians and Jews; all religions were present here.”

Letting out a sigh of sorrow, she said, “Destruction and vandalism have affected a number of religious and historical monuments. They destroyed mosques, churches, homes and everything that speaks to Aden’s heritage and history.”

She added, “The Houthis stormed the Church of St. Antonios in al-Tawahi, looting its contents and destroying parts of it. Shortly thereafter an armed group believed to be affiliated with al-Qaeda stormed the Catholic church in the same district. After firing a barrage of bullets into the air, they then looted it and dismantled its bells, threatening to blow it up at any moment.”

Mohammed, who still resides in Aden, said that the same group then vandalized the statue of Christ atop the church, breaking its head and hands and removing the cross.

Mohammed reported that the war also has resulted in the destruction of the Prince of Wales Sidewalk, an important tourist destination in the city and a site also frequented by locals.

Another resident told Al-Monitor on condition of anonymity that in late August, furniture gifted by Queen Elizabeth II — including a royal bed, a gilded chair, a piano and other items — were looted from the Crescent Hotel, which was built in 1954. These items were then openly sold off in al-Tawahi, according to the source.

Abdul Salam al-Zamki, a government official in charge of antiquities in Aden, told Al-Monitor, “We are still determining the extent of damage caused to historical sites in the city.” He did not reveal any official plan to restore the monuments.