Yemen is trying to save its cultural heritage by appealing to UNESCO and the international community, after many of its historic cities have started collapsing due to heavy rains. 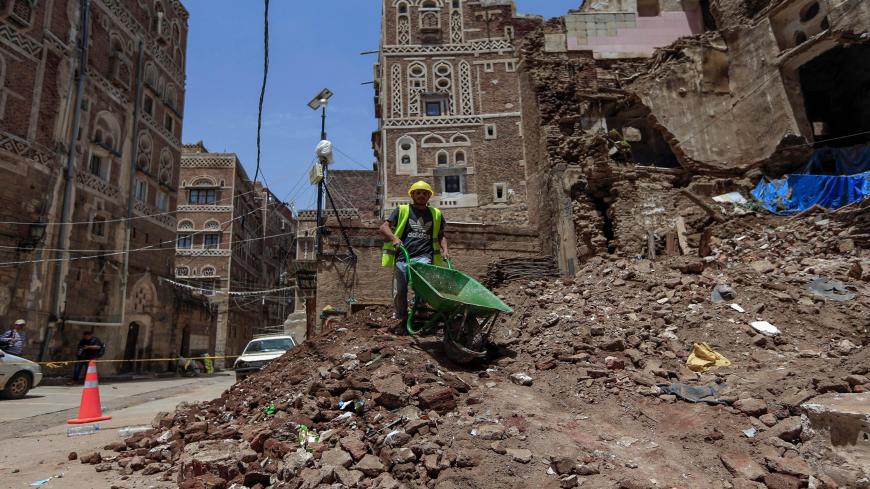 A Yemeni laborer removes the rubble ahead of restoration works on the site of a collapsed UNESCO-listed building following heavy rainfall, in the Old City of the capital Sanaa, Yemen, Aug. 12, 2020. - MOHAMMED HUWAIS/AFP via Getty Images

Yemen is already reeling from diseases, famine and a war that has been raging since March 2015. And now cities are collapsing because of heavy rainfall. The poor infrastructure in the country's historic cities can not deal with the torrential rain and floods, causing another disaster.

Several historic monuments and buildings in the UNESCO-listed Old City of Sanaa have already collapsed. Many of the mud houses and multistory tower buildings in Sanaa’s historic neighborhoods, which have been inhabited for 2,500 years, have partially collapsed due to the exceptional heavy rainfall.

Sanaa’s Old City was inscribed on the UNESCO World Heritage List in 1986, with its 103 mosques, 14 bathhouses and over 6,000 houses dating from before the 11th century.

What is happening could be a natural disaster, but the internationally recognized government and the Houthis are also to be blamed. They have long engaged in a conflict neglecting the country’s infrastructure, which has worsened the consequences of the heavy rainfall, putting Yemen’s historic heritage and cities at risk of obliteration.

For the first time in three decades, the heavy rainfall in Yemen have caused the flooding of giant dams, such as the Marib Dam, east of Sanaa, which has a capacity of 400 million cubic meters, threatening the oldest and largest archaeological area in the country.

The recent severe floods also caused the collapse of the Rownah Dam, east of Sanaa, with a capacity of 252,000 cubic meters.

Despite the severity of the situation following the floods, the internationally recognized government only issued an urgent appeal to UNESCO and other heritage organizations to save Sanaa’s Old City, mainly blaming the Houthis for the collapse of buildings.

Mohammed Jumeh, Yemen’s permanent delegate to UNESCO, told Al-Monitor, “Two hundred archaelogical buildings in Old Sanaa have been totally or partially damaged by the torrential rain; the same has happened in the historic city of Shibam Hadramout.” The latter is known as the city of tower buildings made of mud and is referred to as the "Manhattan of the Desert."

He added, “Sanaa is under the Houthis’ control. The government plays an indirect role in the city through coordination with UNESCO and international supporters. We hope that the UNESCO Emergency Fund will provide urgent support, as well as our ongoing communications with the European Union regarding restoration projects with the support of UNESCO.”

On Aug. 11, UNESCO announced the launch of a campaign to mobilize international funding and expertise in order to protect Yemen's cultural heritage.

Aqil Nassari, vice president of the Houthi-controlled General Organization for the Preservation of Historic Cities in Yemen, told Al-Monitor, “I hold the international community and the UN Security Council fully responsible for lacking serious determination to stop the aggression against Yemen, resolve the political crisis and lift the siege. This resulted in the deterioration of the infrastructure of all Yemeni cities, especially the historic ones.”

He said, “UNESCO’s ongoing support and interest contributed to saving and restoring 40 buildings in Sanaa’s Old City. Work is also underway in the cities of Zabid and Shibam Hadramout on several projects funded by UNESCO through the Social Fund for Development.”

Nassari explained that Old Sanaa is the most affected historic city in the country, with four buildings completely destroyed and 11 buildings partially collapsed. “In addition, 253 roofs sustained light to heavy damage. The city’s old town wall was also heavily damaged,” he noted.

He added, “In the city of Shibam Hadramout, 208 buildings were affected, while 40 houses in the city of Zabid were severely damaged.”

Rainfall continues to pose a major threat to the country's historic cities, especially given the lack of specific measures taken on the ground by the relevant authorities. This is compounded by the fact that some dams and water barriers are on the verge of collapsing due to the heavy rainfall and severe floods.

Duaa al-Wasii, head of the Bilgish Organization for Development, Tourism and Heritage, a civil society organization in Yemen, told Al-Monitor, “If the rain continues like this, Sanaa’s Old City may suffer great losses, which could affect more than half of the city.”

She said, “The heavy rainfall has revealed the extent of neglect and indifference to historic buildings — be it on the part of the official authorities plagued with corruption, or the Yemenis themselves who do not seem to want to work to maintain and protect their ancient homes."

Yemen’s old cities made the country into a open-air museum, and had this rich cultural heritage been properly preserved over the years, Yemen would have not needed any of its oil, gas and other minerals — tourism revenues would have greatly contributed to the state budget.

Undoubtedly, the parties to the conflict in Yemen bear the bulk of the responsibility of this disaster that threatens Yemen’s history and heritage. However, the Saudi-led coalition, which has been leading a war in Yemen since 2015, and its international and regional backers, are also to be blamed for this catastrophe.