The government has pledged to rebuild areas hard hit by a weekend flood, but activists warn the construction of roads, dams and buildings in flood zones means more disasters are likely to follow. 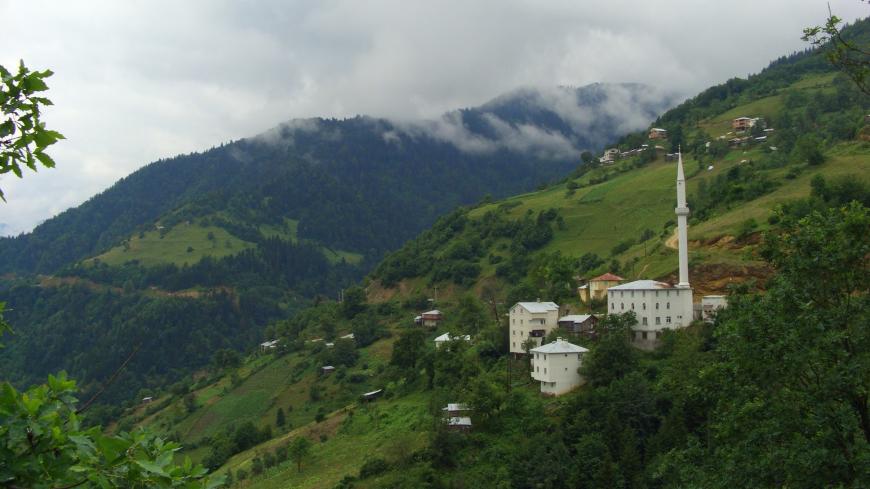 Pinarlar, a village in the Dereli district of the Black Sea province of Giresun, is pictured in this photo taken July 8, 2006. - Zeynel Cebeci

ISTANBUL — The death toll from flooding in northern Turkey climbed to eight while another eight people were missing on Monday, sounding an alarm over the rapid development and climate change that have transformed the Black Sea region and unleashed a series of deadly disasters in recent years.

Search and rescue efforts continued on Monday after torrential rains set off flash floods at the weekend in the province of Giresun. Among the dead and missing were five security officers after their vehicles were pitched into a ravine when a road collapsed. Emergency workers rescued 157 people.

Hardest hit was the town of Dereli, whose name means “with streams,” in Giresun province. Footage from the town of 2,000 people showed cars upended and streets blanketed in mud, rubble and large boulders.

President Recep Tayyip Erdogan promised tax deferrals for those who suffered losses in the flood and to rebuild homes and businesses. The latest flooding requires natural disaster-prone Turkey to reassess how it builds its infrastructure, housing and businesses, he also said.

“Due to difficult [economic] conditions of the past, development in the Black Sea that does not pay enough attention to the reality of the geography we live in has emerged. Earthquakes, floods, landslides and other disasters that exceed our will and power are forcing us to change our priorities,” Erdogan said after a cabinet meeting in comments broadcast live.

Almost 100 surrounding villages were inaccessible after roads were washed out and power was cut to 38 villages, said Interior Minister Suleyman Soylu. No estimate for the cost of the damage was immediately available. CNN Turk reported that 200 businesses were badly damaged. At least 17 buildings were destroyed across Giresun province and more than 360 were damaged.

Some 135 millimeters (5.3 inches) of rain fell in the area in 24 hours, or 1.5 times the average rainfall in the entire month of August, Agriculture Minister Bekir Pakdemirli said. “This is the first time I’ve seen such a large natural disaster,” he said.

Yet deadly floods in Turkey’s Black Sea region have become worryingly common due to poorly constructed and situated buildings, including within river valleys and on narrow flood plains. Dam-building, mining projects and new highways have also altered the region’s geography over the past two decades.

Some 120 people have died in floods and landslides in Black Sea provinces since 2002, excluding the latest disaster, the opposition People's Democratic Party said on Monday. In an emailed statement, the party blamed a 330-mile (530-kilometer) coastal road that opened in 2007 and a series of hydropower projects for blocking runoff from rivers and streams to the Black Sea. It accused the government of putting developers’ profits above lives.

Pakdemirli said the government is preparing a “master plan” for the region to reduce flooding but that eliminating the risk was impossible “even if you are a superpower or super state.”

Activists fear that the damage caused by two decades of shoddy development is irreversible.

“This is a political disaster, facilitated with the state’s permission. We cannot call this a natural disaster when it’s man’s intervention that is the underlying cause,” said Omer San, a spokesman for the environmental group Brotherhood for Rivers Platform (DEKAP).

“Over the last decade, we have seen local climatic change that has intensified rainfall over a smaller territory. Rain that in the past would fall over 120 kilometers of land now falls on five,” San told Al-Monitor. The coastal road was built with stones extracted from nearby quarries where dynamite was used, which has destroyed tracts of bedrock, disrupting water absorption, he said.

Turkey’s emerald-green Black Sea mountains are blessed with a network of 120 or so rivers and streams, and the area receives the country’s most rainfall. It is an important agriculture center for hazelnut and tea production.

DEKAP has campaigned against the construction of hundreds of run-of-the-river (ROR) hydroelectric plants in the Black Sea since 2010.

Turkey currently has 478 hydroelectric power plants and is planning to build another 534, making it one of the world’s most active dam-building nations, according to the US-based nongovernmental organization International Rivers.

Earlier this year, the historic town of Hasankeyf was inundated for the Ilisu Dam, causing an international outcry for destroying cultural heritage and displacing tens of thousands of people in the country’s mainly Kurdish southeast. Iraq has also accused Turkey of exacerbating its water crisis with the dam.

ROR dams in the Black Sea are perceived as less environmentally harmful than large-scale projects like Ilisu because they do not require reservoirs. Instead, they reroute the flow of river water through pipes and tunnels, often underground. However, they devastate biodiversity, disrupt the hydrological cycle and diminish agricultural irrigation and drinking supplies.

So far, the ROR plants that have opened meet less than 5% of Turkey’s electricity needs, San said. Instead, the plants are a byproduct of the global carbon emissions trade, used by polluters to offset emissions they release elsewhere, and often remain idle or underutilized.

“Despite years of scientific reports, court decisions [stopping projects] and public opposition, the government is pressing ahead. Whenever there is a disaster and a loss of life, it promises to compensate people with money, but there has yet to be any work done to restore the natural balance and stop future disasters,” San said.