A Turkish government dam project is threatening to flood a 12,000-year-old ancient settlement, bringing Turkey to the verge of losing traces of at least 10 civilizations. 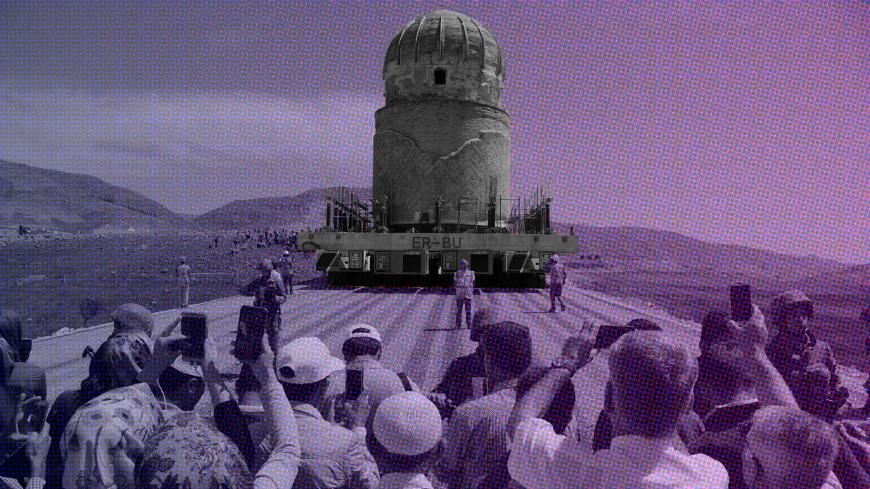 Local people use their cellphone to photograph the tomb of Zenyel Bey while it is moved to save it from flooding in the creation of a dam at Hasankeyf, southeastern Turkey, May 12, 2017. - ILYAS AKENGIN/AFP/Getty Images

The images recently coming out of the ancient town of Hasankeyf have simply been shocking. In scenes and sounds suggestive of the Islamic State’s destruction of Palmyra and the Taliban blowing up the Bamiyan Buddhas, rocks rained down in some areas following the sound of explosions, shaking the 12,000-year-old settlement on the banks of the Tigris in Turkey, in some cases destroying history. In other instances, historical structures were photographed being carted away.

All this is part of the current controversy in the latest episode of a decades-old saga that has brought Turkey to the verge of losing traces of at least 10 civilizations. This unique cultural heritage could have been preserved — it stood to attract millions of tourists if properly excavated — but instead, Ankara has maintained a chilly resolve to submerge an area of 313 square kilometers under the waters of a hydroelectric dam with a maximum lifespan of 60 years. Proposed in the 1950s, construction of the Ilisu Dam began in 2006 and proceeded with domestic funding after three European governments pulled out of the project. The dam is finally close to completion.

In May, authorities relocated the mausoleum of the 15th-century warrior Zeynel Bey in a stage-managed spectacle designed to silence critics by supposedly showing that the government respects historical heritage. Other monuments, including mosques, a bathhouse and a citadel gate, are also slated for relocation to an archaeological park in “New Hasankeyf.” Is this really preserving history? What is humankind actually losing at Hasankeyf?

Put simply, Turkey will be inundating an area preserving 12 millennia of history and some 300 archaeological sites. Ninety percent of Hasankeyf will disappear, and with it, so will myriad monuments built by the Romans, the Byzantines, the Umayyad, the Abbasids, the Artuqids, the Marwanids, the Ayyubids, the Seljuks and the Ottomans, among others. The lost heritage will include the largest surviving arch bridge from medieval times along with mosques, the remains of palaces, mansions, madrasas, a mint, fortress walls and gates, water canals, inns, baths and cemeteries.

There is also the matter of some 6,000 cave dwellings carved into rocks, which the government plays down as worthless. Many of those dwellings remained in use until the 1980s. According to a 2012 survey by the Nature Association, 29% of Hasankeyf residents claimed that they or members of their families had in the past lived in a cave dwelling. Although this type of accommodation alone makes Hasankeyf worthy of protection, the list of excavations from the Hasankeyf Archaeological Excavation Directorate is stunning. It features 38 main sites, many of which include several major monuments. According to the Nature Association, some 300 archaeological sites have been identified so far, with only 5% of them having been excavated.

The archaeologist Nevin Soyukaya says the planned dam has impeded the region’s economic and further cultural development for decades. “No development project has been undertaken in the past 50 years,” she told Al-Monitor. “No infrastructure for tourism was developed. The ancient city was abandoned to its fate.” The Culture Ministry, Soyukaya said, has carried out rescue excavations at only a small fraction of the some 300 archaeological sites identified.

“The excavations began in 2000 and ended in 2012,” she said. “In a bid to fend off the criticism and mislead [the public], they have made plans to relocate nine monuments. Hasankeyf, however, is a whole — with its topography and nature, its palaces, caves, churches, mosques, ceramic kerns, workshops, riverside mansions, streets, bridges, prehistoric settlements, millennia-old cultural heritage, and multilingual and multireligious fabric. To claim that the city will be saved and tourism developed by relocating nine monuments is an insult to human reason.”

The archaeologist decried the situation as “horrible,” noting, “Hundreds of cultural monuments will be inundated before we even know what we are losing in these lands, where some firsts in human history have taken place.” Soyukaya added that the Tigris ecosystem will be destroyed as well, stressing that no official report had been written on the dam’s environmental impact, as a 2013 law exempted the project from the compulsory environmental survey.

The Tigris ecosystem will be destroyed.

Asked about the series of explosions and earth-shaking falling rocks, Soyukaya explained that the authorities last year drew up a plan to reinforce the rocky terrain that serves as the foundation of Hasankeyf’s Upper Town — the castle area that sits above the area to be flooded — and build a replica antique harbor after the water rises as a result of the dam. The plan involves the removal of 24 rocks deemed dangerous, filling 4.75 million cubic meters of some 210 caves and reinforcing Hasankeyf’s Small Palace. Some think the dislodged rock is to be used in the harbor project, but experts believe it is more likely to be used as backfill in dam-related projects. Soyukaya said the government announced in June that the harbor project had been tendered.

Also according to Soyukaya, the nongovernmental Hasankeyf Initiative has observed that rocks posing no real danger are being removed as well. “They used explosives that cause huge vibrations, noise and environmental pollution,” she said. “This has endangered other rocks and caves and damaged the area’s topography and natural fabric. Some of the falling rocks have damaged the remains of churches and wine cellars.” Mehmet Ali Aslan, a lawmaker for the Kurdish-dominated Peoples’ Democratic Party, chained himself to a rock in the area in protest.

Why is Turkey destroying unique historical riches for the sake of a dam? Soyukaya believes there is a political dimension to the issue. “The area affected by the dam lies at the intersection of roads that link southern countries to Turkey, Europe and countries to the north,” she said. “Also, the Tigris meets the water needs of Iraq. With this dam, a new definition was formulated, which is ‘security dams.’ The aim is to control regional roads and use water to discipline the countries to the south.”

Aslan said he had decided to stage a protest after “three sleepless nights” brought on by news of the rock demolition. “It is no different from what the Islamic State and the Taliban have done,” he told Al-Monitor. “I talked to shopkeepers [in Hasankeyf], and everybody spoke of explosions that jolted the town and terrified the children. … My conscience took me to Hasankeyf so that our grandchildren do not spit in my face in the future.”

Aslan, who represents Batman in parliament, described Hasankeyf as a “unique city in the world,” where many phases of human history can be seen in one place. He stressed that Arabic is the “essential language” of the area. “The Kurds settled there in the past 50 years,” he explained. “The region’s Arabic identity will be destroyed as well.”

According to civic groups, more than 100 endangered plant and animal species also face extinction at Hasankeyf, along with history. Yet, the Batman City Council, which asked the State Water Authority what measures were being taken about this, received the following reply: “No measures have been taken as no endangered species exist in the Tigris valley.” Such is the Turkish state’s approach to history and the environment in a nutshell.