Turkey's extensive dam construction projects are threatened with attacks by the Kurdistan Workers Party, which sees the projects as destructive and only serving military objectives. 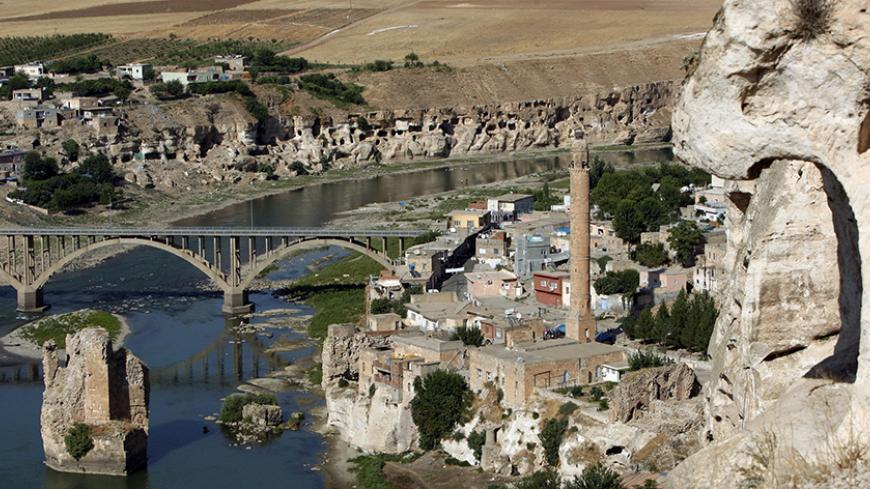 The Tigris River, shown with the minaret of a 14th-century mosque on the right, flows through the town of Hasankeyf in southeastern Turkey, Aug. 14, 2009. - REUTERS/Murad Sezer

The governor of Diyarbakir issued a statement July 15 about an improvised explosive device attack against a military convoy on the road to the Silvan Dam, northeast of the city. The military vehicles sustained light damage, it read. At least 14 such statements have come from the governor’s office in the past three months.

Construction began on the Silvan Dam in 2011; it is expected to be the second-largest irrigation dam in the country after the Ataturk Dam. But the dam that will irrigate 245,300 hectares (606,149 acres) of agricultural land is in the news not because of its benefits but because of the frequent attacks on it. The governor’s statement also said “some groups are engaged in totally baseless, negative propaganda by labeling the works undertaken to improve the economic welfare of our people as works for military purposes,” alluding to the linkage between the Kurdish question and the dams.

Why are the dams targeted?

In a statement last week, the Kurdistan Workers Party (PKK) leadership openly declared the organization's intention to attack the dams, which, according to the PKK, the Turkish state is building to restrict movements of the militants.

Although the PKK did not name it, the dam the group attacks most is the Silvan Dam, which when completed will flood many areas the PKK frequently uses northeast of Diyarbakir.

Another troubled area is at Sirnak, where 12 dams and reservoirs are under construction. Most of them, about 10 kilometers (6.2 miles) to the Iraqi border, lie along the routes used by the PKK to enter Turkey. On the Iraqi side of the border, the PKK has its Haftanin camp.

Some dams are already collecting water.

Veli Encu, who lives in Ortasu village near the dams, told Al-Monitor, "They are destroying nature. Obviously these dams are not to create employment or to generate power. The dams built for security purposes are destroying nature and victimizing people living in the area. Many villages are now threatened. One or two will have to be relocated. They are doing it to prevent the movements of the organization.”

Recently there have been reports of a hunger strike in Tunceli over the Pembelik Dam, which is under construction. The members of the Arunc family remained besieged in their village when the dam waters closed the only road to it. They staged a hunger strike to attract attention to their plight. When they were promised a bridge to get them out, they ended the strike.

This wasn’t the first time Tunceli appeared in the news. Lawyer Baris Yildirim, a spokesman for the Dersim Initiative to Preserve Cultural and Natural Heritage, noted 27 projects that are going to affect Tunceli. Yildirim told Al-Monitor that when the dams are finished, Tunceli will become a veritable island. He said, “Building the dams means forced immigration. Seventy-five percent of Dersim is mountainous. Those living in valley villages will be forced to immigrate if the dams are built. They will lose connections to towns in the region. Keban Dam was built to the south of Tunceli in 1975. Three more dams were built illegally on the Peri stream to the east. Only the northern part is left open, where now three dams are planned on the Karasu River. If all these are built, Tunceli will become a real island, cut off from its surroundings. These dams will destroy the cultural and natural heritage as well as future living areas. At one point, the State Hydraulics Work Department had said that the dams that are planned for the Iraqi border had security objectives. Likewise, there is no other explanation for building dams on rivers encircling Tunceli.”

Tunceli is far from the Iraqi border, but it is an area where the PKK moves around easily, taking advantage of its rough terrain, deep galleys and dense forests. The PKK militants also pass through Tunceli on the way to other regions.

And then there is historic Hasankeyf, which has become the symbol of the anti-dam movement in Turkey. If the Ilusu Dam is finished, millennia-old Hasankeyf will be flooded. The project began in 1954, but the construction could not start because of lack of funds, technical shortcomings and ecological problems. The foundation was finally laid in 2006, and the dam was projected to be completed by 2016. This dam, 45 kilometers (28 miles) from the Syrian border, will have a reservoir of 311,000 square kilometers (193,000 square miles). These, too, are areas where the PKK has been active.

Recep Kavus, who has been struggling against the dams for years in Batman, also believes the real purpose of the dams is security and says the Hasankeyf dam will erase human history. “It is a lie to say that the dams are built for electric power. The decision to build the Hasankeyf dam was made by the National Security Council. The water reaches there through gullies with plenty of caves, forests and places to hide. The [PKK] organization is using this area for its bases. Their favorite routes are in this area. One of the main reasons for the Ilusu Dam was security. Even the state admits it. But this is not a solution. You cannot ensure security with dams and guns. You will only create bigger problems. You are destroying not only your history but the history of humanity by flooding 12,000-year-old Hasankeyf.”

While one side is focused on investments and economic welfare, the other is more interested in security concerns. The chairman of Diyarbakir-based Euphrates Social Research Center, Mehmet Kaya, believes the dams will affect the solution process. Responding to Al-Monitor’s questions, Kaya said, “Now they are setting fire to construction machinery. Dam work has stopped. Until you solve the Kurdish question, it will remain as such. There is no simple answer as to who is telling the truth, the state or the organization. You build dams, roads and follow up with highly fortified military outposts, as if facing an enemy country. Obviously there were some steps taken that eroded trust. You need to solve them through negotiations. The [PKK] organization sees these state actions as denying it operational areas and routes, which will restrict its operational area. That is why it sees attacking as legitimate. They don’t see it as service to people, but as measures against themselves. This situation is bound to create an environment of clashes."

Despite all of the controversy, the Turkish government is determined to continue with the dam projects in the region.