More than 60 years in the making, Turkey's Ilisu Dam project is set to finally flood 12,000-year-old Hasankeyf and all its relics. 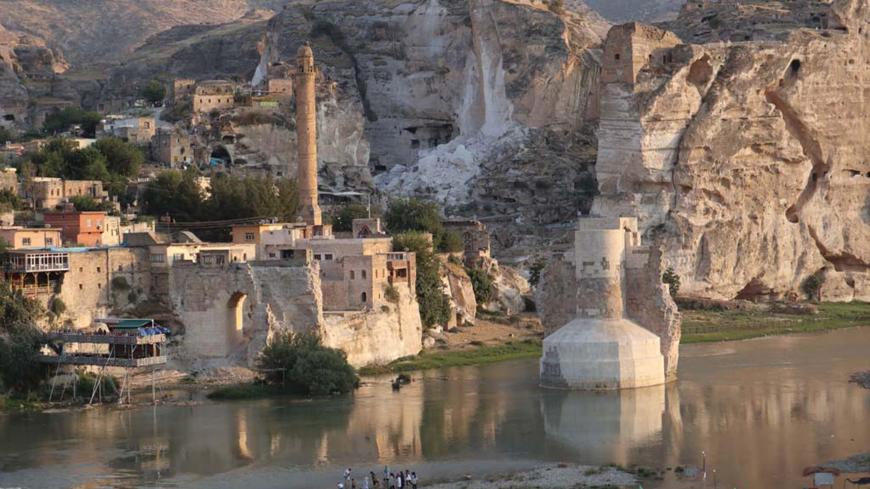 Hasankeyf, a historic town in southeast Turkey that faces destruction after the completion of the Ilisu Dam, is seen in this photo taken Sept. 15, 2017. - Mahmut Bozarslan

HASANKEYF, Turkey — “All we want to do is to maintain our heritage and our history, and for that we are called terrorists!” a resident of Hasankeyf told Al-Monitor. In this historic southeastern town, which has been at the top of Turkey's agenda and the site of explosions throughout September, few people are willing to speak on the record for fear of being branded as terrorists.

Hasankeyf, a town in the southeastern province of Batman, dates back 12,000 years. Situated on the banks of the Tigris, the area has been home to many of the civilizations of Mesopotamia. Today, it is at the end of its existence. The old town, with its many visible artifacts and more still awaiting excavation, will be submerged under the Turkish government’s pet project, the Ilisu Dam. When completed, it will be Turkey’s largest hydroelectric dam and the crown jewel of the Southeastern Anatolia Project. The waters of the Tigris will rise by 60 meters (197 feet) in places, leaving most of the historical area under water and forcing about 80,000 people to leave ancestral homes and move to the “new town” — some 10 kilometers (6.2 miles) away — against their will.

The first work toward the Ilisu Dam began in 1954, when a group of people — who the residents thought were eccentric Western tourists — arrived on mules. This group spent the next few weeks measuring the flow of the river with strange and exotic-looking equipment. They were the first group of engineers, employees of the State Water Works, doing groundwork to build the dam, which would modernize the irrigation of southeast Anatolia but leave the historic town under water.

Various civil society groups battled the regulatory dam project for decades, and sometimes they thought they'd gotten the upper hand. In 2009, Germany, Switzerland and Austria withdrew their support from the project because the dam would destroy the cultural heritage and ecosystem of the region. Consequently, Turkey used its own domestic resources to build the dam worth 1.2 billion euros ($1.4 billion), refusing to stop from the construction that was kicked off with a 2006 ceremony attended by Recep Tayyip Erdogan, prime minister at the time.

In September, daily life in Hasankeyf was often interrupted by the sounds of explosions. The images from the region are reminiscent of the Islamic State’s destruction of Palmyra. Despite eyewitness accounts and video footage that shows explosions in the cliffs around the ruins of the Hasankeyf citadel, government officials firmly maintain that no explosives were used. According to a statement made by the Batman governor’s office, “expert teams” are clearing away the large stones that are bound to fall and pose a danger to the people. They claim that they use only environmentally friendly methods and not dynamite. The officials also maintain that a 50-meter (164-foot) wall will prevent the historic castle from being inundated.

The artisans who work in the old bazaar near the historic town have already been given instructions to move to the “new Hasankeyf.” Shop owner Mehmet Emin Aydin said that the explosions have destroyed not only the landscape, but also their businesses, their way of life and their mental state. Speaking to Al-Monitor, Aydin said, "When the bazaar is closed, our business will plummet. The new area where they want to put us is completely deserted. No tourist will pass through there until they build the road, and no road will be built until the dam is fully operational. We, the tradesmen, are the victims.”

Ayvaz Tunc, 60, is a tradesman who returned home to Hasankeyf after years elsewhere. He went to other places to work for years and returned to open a cafe on the banks of the Tigris with his children. “I am old and I want nothing for myself,” he said. “All I want is that they let this beautiful landscape remain as it is — for my children, for future generations, for my country, for my people.”

The well-traveled man said that Hasankeyf is one of the most beautiful spots in Turkey. “Let Hasankeyf remain as it is, with its natural beauty, with its historical heritage,” he said. “Let tourists come and see this place — do not let it go under water.”

Al-Monitor’s efforts to talk to others were rejected. Many fear that if they say anything, they would get in trouble with the local authorities. Others simply say it is no use to talk about it anymore because Hasankeyf’s destruction is already happening and nothing can stop it.

Arif Ayhan, a member of the board of directors of the Hasankeyf Tourism Culture and Development Association and a longtime activist against the dam, told Al-Monitor that the government will want to complete the dam quietly, without controversy.

"The authorities want to end this conversation. The scientific delegation here is simply lying to our face,” he said, referring to the claims that there were no explosives used. “They do not care about human rights. All they want to do is to deceive the people.”

Ayhan said of the demolition, "Dynamite is wrong. We are talking about a historical place. Why could they not work a little slower, see what is under the rocks? Why do they have to use dynamite?”

The activist said he's aware of the positive contributions the dam will make to the region, but he resents the way history is sacrificed for development. “It is irrevocable now. I think we are at the point of no return — the dam will be completed, historical areas will be left under water. We will have to leave our homes. We believed for a long time that there would be a solution and we would not have to move, but we see that there is no solution for us in sight.”

Ayhan said that the tradesmen will not leave the bazaar yet and will hold another meeting in the coming weeks. “Let them close down the bazaar,” he said. “Let the construction vehicles come and force us.”

The local authorities have said that they will wait to evacuate the bazaar until the end of October so that some of the artifacts can be carried to the new site. A famous monument near the bazaar, the tomb of Zeynel Bey, a 150-ton mausoleum that is thought to be 650 years old, was moved last spring.

The government remains unmoved on the Ilisu Dam, despite all domestic and international pressure, for many reasons. Irrigation is paramount for Turkey, given the ever-growing scarcity of water. There is also a political aspect: With this dam, Turkey will control the flow of water to the downstream countries of Iraq and Syria as well as the roads of the region, which is dominated by the Kurdistan Workers Party.

But are the benefits worth destroying 12,000 years of history? If the Turkish government ever does second-guess the idea, it will likely be too late.