Women whose houses are left underwater due to the Ilisu Dam vow to keep their memories alive. 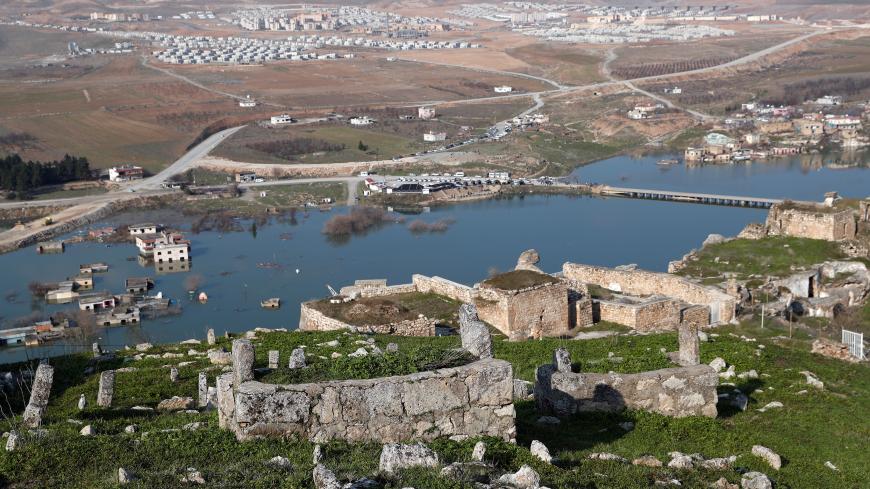 An old cemetery is seen in Hasankeyf, which will be significantly submerged by the Ilisu Dam, with new Hasankeyf in the background in southeastern Batman province, Turkey, Feb. 20, 2020. - REUTERS/Murad Sezer

Habibe Sacik sat at the banks of the Tigris River and wept.

“I came to see my village one last time,” she said a few days before the waters of the controversial Ilisu Dam inundated her village along with dozens of others. “Wherever you go, how far you travel, home is home. You feel its loss.”

Sacik is one of two women who tell the story of the region through the eyes of women, in a new documentary called “Siya Ave,” which means “Shadow of the Water” in Kurdish. Traveling along the banks of the Tigris River, the two women tell of their lives impacted by the Turkish government’s pet project in southeastern Anatolia, the Ilisu Dam. Ilisu is Turkey’s largest hydroelectric dam and the crown jewel of the Southeastern Anatolia Project. But it also submerges Hasankeyf, a 12,000-year-old town in the southeastern province of Batman and home to many of the civilizations of Mesopotamia. Some 80,000 people have already left their ancestors’ lands and reluctantly moved to the new settlements offered, some 10 kilometers (6 miles) away.

Sacik’s village, Celtikbasi, is not in internationally known Hasankeyf but further into the east, in the Kurtalan district of Siirt. Located in the Tigris Valley, Celtikbasi, along with half a dozen nearby villages, was vacated last year, too.

Sacik, who has moved to Batman, visited her village one last time, along with her best friend from childhood, Firyaz Yoksu, who had moved to Istanbul decades ago. Yoksu is also the mother of the director of the documentary, journalist Metin Yoksu.

The 25-minute documentary shows how the women travel to their village and to other parts of the region one last time, sharing memories and telling their family history. “We will not forget our village — not ever,” Yoksu said on camera. “But our grandchildren will not see it.”

Sacik added, “It was our great-grandfather who settled here, my parents were born here. I was cooking when I heard that the rising waters had reached the village next to us. So I came immediately, I knew I had little time to see it one last time.”

While Sacik took a bus from the next town, Yoksu got her son to drive her from Istanbul, which took a whole day. “I had to see it one last time,” she said. “I know I will carry the longing for my natal town to my grave.”

The history of the controversial dam in the southeast goes back to the 1950s and more than 60 years of campaigning against its construction, despite the advantages it would bring to the water-scarce region. After much zigzagging from consecutive governments, the construction kicked off with a ceremony in 2006 attended by then-Prime Minister Recep Tayyip Erdogan. Eleven years later, in May 2017, the authorities relocated the mausoleum of the 15th-century warrior Zeynel Bey in a stage-managed spectacle designed to silence critics by supposedly showing that the government respects historical heritage.

For the residents, the move of the tomb was the final nail in the coffin. “I knew that once the tomb was moved, nothing, no one could remain in Hasankeyf,” said Sacide Yagan, who watched the move from the terrace of her old home, now underwater. “I knew that we would have to move very, very soon — both the living and the dead,” she told Al-Monitor.

More artifacts were moved, though some remained and residents were gradually moved to their own homes. The slowly rising waters started to swallow the valleys, then the nearby villages and finally the historical district.

Many of the women say they were the ones who minded most leaving behind their homes, where they have spent most of their lives. “I lived in the same house for 50 years, brought up all my children there,” Emine Demirkan, a 70-year-old resident of Hasankeyf, told Al-Monitor. “We built this house ourselves, making improvements whenever we had a bit of money. Then we stopped because we realized that we had to leave the house. We will get 230,000 Turkish liras [$37,800] for this house. We did not want it at first but we would have to take it, what else can we do?The new house is far too small, we spent a good deal to make it habitable.”

Another woman stood crying, “I have so much to say, but no words, only pain. I do not want to leave my house, but what can I do?” she sobbed, but shook her head when asked her name, reluctant to give it.

Not all the residents of Hasankeyf have been offered a new house in the new town, some 10 kilometers away. Those who did not apply in time were rejected on the grounds that there were no houses left for them.

Nilufer Iridil, 34, whose husband is unemployed, told Al-Monitor that she did not know what to do because they had been late in applying and got no house in the new town. “This is my house and it is all I have. We have no jobs, no employers. We have three children. Where will we go? We will go live in caves if we have no choice.”

Her mother, Remziye Celik, lived in the cave dwellings that surrounded the town and gave birth to her first child in the cave before moving to a house in old Hasankeyf, Iridil said. The Celik family now has a house in new Hasankeyf. “But my mother is not happy,” Iridil added. “She misses the old town, the old neighborhood and she misses me.”

Kadriye Atmaca, a 67-year-old mother of eight children, was packing up when Al-Monitor talked to her. “We love our homes very much and it is with tears we leave. We only do that because we have to. We grew up here, we love it here. We do not go voluntarily. I will not forget Hasankey — my paradise — until I die. I will tell my grandchildren about it and show the photos,” she said.