Is Turkey driving down road to environmental disaster?

The Turkish government’s Green Road Project has turned the quiet residents of President Recep Tayyip Erdogan’s home region into feisty street protesters as they struggle to protect the environment on which their livelihoods and traditions rely. 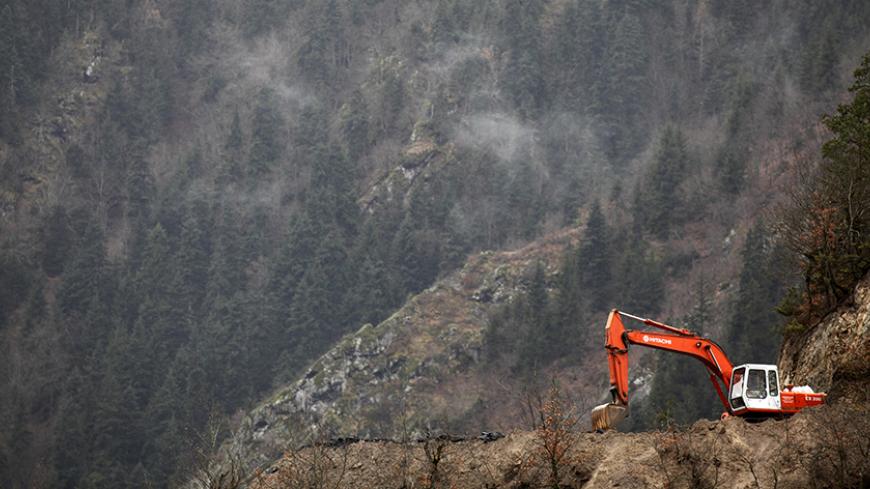 A digger works at the Papart River in Artvin province, northern Turkey, Feb. 21, 2010. A local civil initiative is struggling to stop hydroelectric projects in Artvin province, which they believe will damage the natural habitat. - REUTERS/Umit Bektas

Local citizens and environmentalists are blaming government greed for deadly floods in northwestern Turkey. On Aug. 24, in Hopa, Artvin (bordering Georgia), a massive flood claimed the lives of eight people, and three more were missing and presumed dead at the time of this writing. Buildings are in ruins and hundreds of cars are stuck in floodwaters and landslides. In the past decade, floods have claimed more than 100 lives, and locals lament the lack of efforts to prevent future disasters.

The mountainous region receives the highest rainfall in Turkey, so one might be tempted to label the area's floods as natural disasters — but environmentalists disagree. They hold the haphazard city planning of money-hungry government elites responsible for the deaths and material losses.

There are at least three man-made causes for the increasing number of deaths. The first is the highway that was built parallel to the coastline. The road's design diverts the courses of creeks and streams as they flow toward the sea. It has also robbed the region of its beaches, blocking locals' access to them. Next are hydroelectric dams for power generation and uncontrolled mining activities. The plants have caused so much grief and resentment that there are local folk songs lamenting the damage they've done. Dam projects have seized limited farmlands and destroyed thousands of trees, plants and animals. Destruction of local ecosystems has not only caused pollution, but also left cliffs without the protection of deep tree roots, making them vulnerable to constant erosion and frequent landslides. Last is unplanned urban development and faulty city planning, or lack of planning at all. Buildings are erected on river and creek courses. Most of the environmental damage is seen in these areas.

All three causes share a common motivation: untamed greed for lucrative projects that benefit private construction companies. Almost all of the projects are completed by cutting corners and finding shrewd ways to combat bureaucratic rules and regulations. Locals have relentlessly sued these companies. In almost all cases, the courts have ruled against the construction plans. The construction has not stopped, however.

Gokce Yilmaz, a volunteer activist for the Firtina Valley Initiative, an environmental group working to preserve Eastern Black Sea plateaus, told Al-Monitor, “The coastal freeway was built in 19-kilometer [almost 12-mile] patches to bypass oversight from the Ministry of Environment and Urbanization.”

The completed road is 604 kilometers. Yilmaz explained that the same patch method is now being used on the notorious Green Road project as well, so that the ministry will not have to produce any reports on the 2,600-kilometer (1,600-mile) road. Yilmaz repeated the burning question of the locals: “If the projects are so good for the people, why are they avoiding ministry review?”

The Green Road Project — certainly a misnomer — aims to connect 40 plateaus and highlands with the alleged goal of opening the region for tourism. The locals who live in towns for nine months a year, particularly those raising livestock, move up to highlands with their animals as the weather gets warmer and flies become a problem. They return as the weather cools. Due to heavy snowfall, these plateaus are not easily accessible in winter. Lack of human traffic means nature has time to recover without interference.

The Black Sea highlands (with ice lakes, creeks and hundreds of shades of green) have become the latest ecotourism craze in Turkey. Unfortunately, as with the dams and the coastal freeway, unplanned development is destroying the beautiful scenery in several popular areas. Sumela Monastery, Uzungol (Long Lake) and the Ayder plateau — which now all have highway access — have become victims of overcrowding. Pollution, unregulated construction and deforestation have ruined their ecosystems. About 20% of all trees have died in the forests due to climate change.

Locals are aware that government-initiated tourism centers, while lucrative for investors, are not sustainable for ecotourism, even for a decade.

Other plateaus have rudimentary roads and are not easy to reach without four-wheel drive. Each plateau offers limited accommodation. Mesmerized tourists make photography forays to the highlands, which provide a healthy venue for livestock — and for people seeking refuge from polluted and overcrowded city life. You can see the stars at night, bright and clear. You can still drink the water running in the creek, right then and there. You are sure to forget about your iPhone and actually sing with the locals at night. It is quiet, and the butterflies never sleep. It is a mental retreat to travel to the highlands to cure your nature deficiency.

Yakup Okumusoglu, a Black Sea native and a prominent lawyer for the locals, discussed with Al-Monitor the threat that development poses.

"Rather than repairing the roads to the plateaus from the towns, why would the government want to spend millions of dollars constructing roads at 2,000-3,000 meters' elevation, which are covered by snow most of the year? It will destroy the natural habitat of wildlife and several unique ecosystems.

"Many of these plateaus are protected as national parks. The locals who travel up the highlands take care of their own trash, literally collecting and sending it off to [the] main town for disposal weekly. The locals have learned from previous experiences. They have witnessed how fast the environment can be ruined, and the payoffs are never worth the destruction,” he said.

Indeed, since early summer, protests in Rize to prevent the Green Road construction have been shared widely in social media, with the hashtag #SayNotoGreenRoad. Local women have been particularly vocal in these protests. Women in their 60s and 70s with homemade banners stand tall in front of gendarmerie and bulldozers. One particular woman who has a fish restaurant, Mother Havva, leads the fight. Despite being a whole-hearted supporter of Turkish President Recep Tayyip Erdogan, Mother Havva said she has been a victim of social lynching by pro-Justice and Development Party media. The governor of Rize had labeled all protesters "capulcu" ("looters"), the same term used by Erdogan against the Gezi Park protesters.

However, their concerns are rather simple: How will their animals get to the highlands if roads and tourism centers are built? If all the plateaus are connected, who will protect the livestock? Currently, animals can graze in peace in an enclosed area they share with people. Locals know well that this corridor through the plateaus means an end to their traditional lifestyle, to herding livestock and to clean water and ecosystems. There are also rumors that more mining is being planned, as the Kackar Mountains are rich with minerals.

Locals and environmental groups have been using all available social media platforms and have collected more than 44,000 signatures so far on a Change.org petition. Opposition parties have brought the matter to parliament, questioning what they believe are shady dealings. Young activists have high hopes that Muslum Dogan, the new development minister from the pro-Kurdish Peoples' Democratic Party, will stop the project.

It is mind-boggling that the government would invest millions of dollars in a project where locals are adamantly protesting at the cost of being arrested.

Known for its tea, fish and hazelnut production, the region is home to some of world’s most precious and rare ecosystems and national parks. That is why locals and activists refer to the Green Road project as a nightmare and “dagger in the heart of the Black Sea region."

The roles have been reversed in the Black Sea highlands: It is no longer government authorities trying to protect national parks and forests against careless citizens, but local people who are struggling to preserve the highlands against the greed of the government.