Environmental problems provoke protests on all fronts in Turkey

The Justice and Development Party government’s policy of ignoring environmental concerns cause tensions in Turkey. 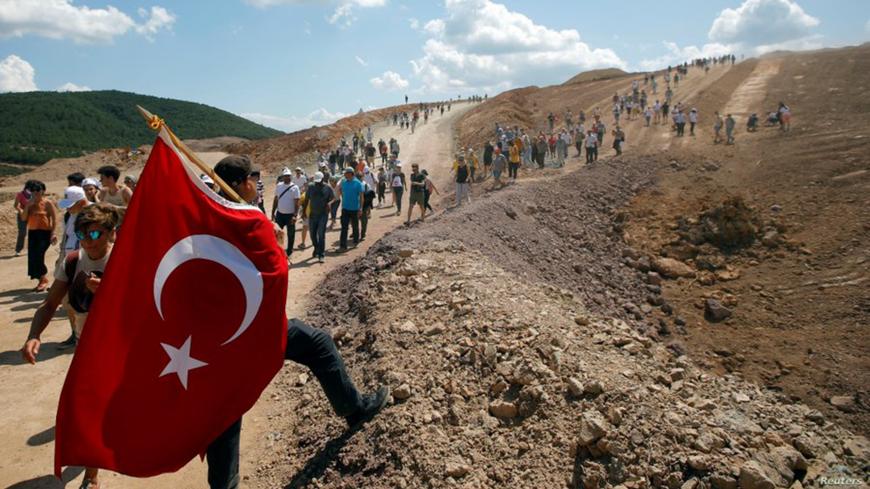 Thousands of protesters take part in demonstrations against the Kirazli Gold Mine Project after disturbing images of clear cutting on Mount Ida were shared on social media, Kirazli, Turkey. Posted Aug. 6, 2019. - Twitter/@tameryazar

In May 2013, Turkey was shaken by mass protests that were labeled as the Gezi Park uprising. In the beginning, there were only a few tents erected by environmentalists in Gezi Park in Istanbul to prevent the cutting down of some trees. After a harsh police intervention where tents were set on fire, millions of Turks took to the streets across the country in an unprecedented social movement. Some of the protesters are still in prison and being tried.

Nowadays, tensions are running quite high once again on environmental matters with protests, campaigns and strong reactions across the country. Thousands of protesters staged demonstrations on the outskirts of a small town in the northwestern province of Canakkale over the Kirazli Gold Mine Project owned by Dogu Biga Mining, the Turkish subsidiary of Canada-based Alamos Gold, after disturbing images of clear cutting in the Ida Mountains shared on social media sparked public outrage. Alamos Gold allegedly cut down 195,000 trees, four times more than it declared in the environmental impact report.

In addition, some 123,000 people signed a petition in just under two days to protect Lake Salda in the Yesilova district of Burdur province in southwestern Turkey. Lake Salda is referred to as “Turkey’s Maldives” because of its white sand and turquoise waters. The petition demands that the Turkish government cancel plans to build a park around the lake.

Meanwhile, protests continue against the filling of the controversial Ilisu Dam, whose artificial lake will submerge 12,000-year-old town of Hasankeyf in Batman province in Turkey's southeast. Police took 19 protesters into custody before releasing them.

These and other protests and actions against environmental degradation took place this month; the numbers of protesters point to some critical social and political trends in Turkey.

One may need to understand what caused all these environmental problems and the sense of alarm they created before trying to comprehend what these protests signify for the future of Turkey. For the last 10 years, there has not been a single day where has not been an image in print and on social media showing serious environmental problems. Some of these issues were caused by large construction projects such as Istanbul’s third bridge, Istanbul's third airport and so on. It is estimated that 13 million trees were cut down just for Istanbul’s third airport. For Erdogan’s summer residence the number was 40,000, and for his official residence (they are both called the Palace) 10,000 trees were cut down.

Gold mines such as the one operated by Canadian Alamos Gold in the Ida Mountains cause serious anxiety because of the huge amounts of cyanide that are used to reach the gold companies want to extract. Canakkale Mayor Ulgur Gokhan warned that the region is a first-degree seismic zone and that an earthquake could spell a disaster and that water sources might be poisoned.

In fact, Turkey was condemned by the European Court of Human Rights for not closing down a gold mine after it was established by local courts that cyanide leaching caused health problems for people living in the vicinity.

The Canakkale mayor told the press that 26 other mining licenses have been granted in the region so far, meaning that the deforestation caused by Alamos Gold could be repeated many times over in this region.

These environmental issues are occurring not just from mines in northwest Anatolia, where Alamos Gold cut down the trees, but across the country. The root cause of these problems is legal amendments made by Erdogan’s Justice and Development Party government. In 2004 the government changed the mining laws, making obtaining permission to operate much easier for Turkish and foreign investors. The government granted more than 40,000 mining licenses between 2006-2008 alone.

According to 2019 Turkey Forestry Report of the Foresters' Association, as a result of the 2004 legal amendments, it became possible to operate mines even on the best-quality forest land in Turkey. Thus, foreign and Turkish investors have been operating mines in areas with some of the best ecosystems in the world, such as the Ida Mountains and Artvin. Ahval News reported that during the reign of the AKP, forest areas opened for mining have increased by 170%.

When one looks at the language used by protesters, it can be seen that these environmental problems are not seen as isolated incidents and that they provoke widespread angry reactions. One of the protesters from a leftist political party, Omer Ulger, likens their struggle against Alamos Gold mining in the region to mass protests against the visiting US 6th Fleet in Istanbul in February 1969 in which two persons were killed and hundreds wounded. Ulger says Turkish protesters will expel the mine from the Ida Mountains just as the 6th Fleet departed Turkey 50 years ago. Another protester, Sedef Kabas, a famous TV anchorwoman, said, “The enemy did not leave before setting Izmir on fire [during the War of Independence] and the AKP will not go before looting the country.” The nationalistic sentiments in these messages could be misleading in that they could be read as a protest against foreigners, when it might be wiser to read the statements instead as an indication of strong anger.

Protests against the construction of the Ilisu Dam have also employed strong messaging by evoking the symbols of international destruction. Hundreds of Twitter users have likened the blowing up of Hasankeyf with dynamite to the Taliban’s shattering of Buddha statues in Afghanistan.

These bitter reactions show, first, that people are outraged, and second, that even though thousands of people have been arrested, taken into custody and punished just for their social media messages, the anger caused by the environmental problems has trumped people's fear of being retaliated against.

Professor Berkan Gultekin, an expert on environmental problems, says the government will continue to open natural resources to exploitation and commercialization to overcome the country's economic crisis.

This means that protests will continue. For example, 220 tents have been erected to join the Water and Conscience Watch to protect the forest against the gold mine in the Ida mountains, showing how environmental struggle will be playing a prominent role in the future of Turkish politics.