Turkey is eager to boost gold production amid surging demand for the precious metal despite a growing movement against the environmental damage caused by the industry. 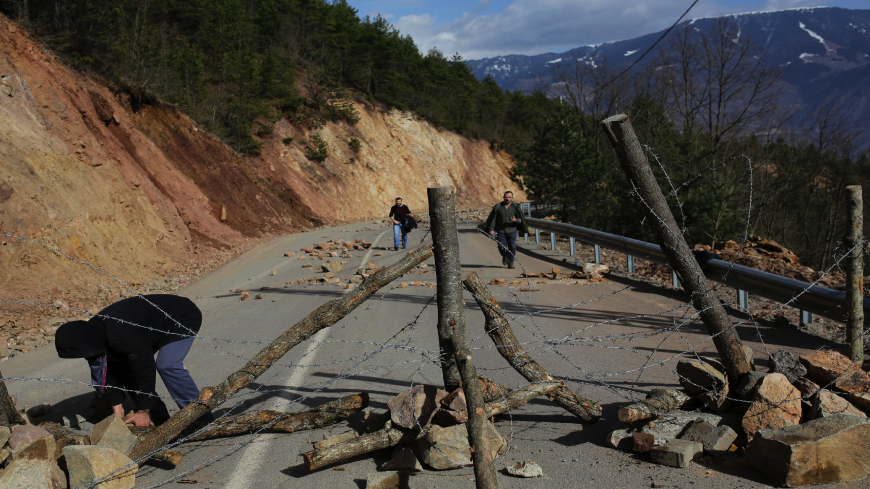 Turkish demonstrators stand near a barricade made with barbed wires and tree branches during a protest in a bid to block construction work of a goldmine project in an ecologically pristine area in the Black Sea region, on Feb. 17, 2016, in the northern Turkish city of Artvin. - YASIN AKGUL/AFP via Getty Images)

The economic uncertainties sparked by the COVID-19 pandemic have led to the global rise of gold as a financial safe haven. In Turkey, where the demand for gold has been traditionally high, the gold rush has reached jaw-dropping levels, fueled also by the nosedive of the Turkish lira.

Amid rising gold prices, gold-mining companies are eager to expand their activities in Turkey, and the ruling Justice and Development (AKP) is ready to grant them new favors — although the environmental damage caused by the industry has given rise to one the country’s most vigorous environmentalist movements in recent years.

Turkey’s gold bar imports reached nearly 174 tons in the first eight months of the year, producing a bill of more than $13 billion that contributed 50% of the country’s current account deficit. In 2019, they totaled 250 tons. As of August, gold bar imports were worth $20.4 billion on a 12-month basis.

Turks have traditionally used gold as savings, keeping gold jewelry or coins “under the mattress” at home. Gold coins and jewelry, especially bracelets of elaborate sizes and styles, are also the prime gifts that newlyweds would receive. Drawing on the popular demand for gold, Ankara has notably encouraged gold mining in the past two decades, granting generous incentives to foreign investors in particular and paying little attention to the environmental harm that gold-mining activities cause.

Gold-mining projects have been concentrated in the northwestern province of Canakkale and neighboring Balikesir, which are home to unique natural riches and historical heritage, including the site of ancient Troy and Mount Ida (Kaz Daglari in Turkish), a frequent setting in ancient Greek mythology. About 30 projects have been licensed in the region, some of which have resulted in major deforestation, triggering mass protests and legal battles. Local communities and civic groups argue the chemicals used by gold-mining companies pose a threat to water resources and the ecosystem in the region. Canada’s Alamos Gold is one of the biggest and most criticized investors in the area.

Earlier this month, AKP lawmakers submitted a draft bill to parliament, designed to facilitate renewal procedures for mining licenses, rekindling criticism that Ankara is concerned more with the commercial interests of companies than the environmental alarm and the grievances of locals, who are often rural people depending on agriculture and husbandry.

Gold prices in Turkey have spiked at a rate much higher than the global average, stoked by economic risks peculiar to Turkey, atop the global gloom. Much of the apprehension stems from the government’s growing authoritarian tilt since the failed coup attempt in July 2016, its tightening grip over the judiciary and the dubious management of the economy. The lira’s slump since 2018, coupled with inflation rates of up to 25%, has whipped up the Turkish propensity to put savings in gold, sending prices through the roof.

Turkey’s gold output is still modest, accounting for about 1% of the global production. The potential for expansion, coupled with the strong demand for gold and rising prices, has increased the appeal of domestic production. For the government, encouraging local production is also a way to curb gold imports and thus the country’s current account deficit.

Turkey’s gold output totaled 37 tons last year, according to central bank data based on production notes that companies send to the Istanbul stock exchange. The biggest leap occurred between 2008 and 2013 when the output rose from 11 tons to 33.4 tons. In the first seven months of 2020, gold-mining companies reported outputs totaling 20 tons, with the figure likely to reach 35 tons by the end of the year. All in all, the domestic production is equivalent to no more than 15% of the imported gold.

The AKP government has introduced a series of legal amendments in recent years to relax environmental criteria for gold mining in a bid to encourage investment in the sector. Tellingly, a report by the public agency in charge of mineral research and exploration points out that “frequent changes” in mining laws “make things harder for investors and deter particularly foreign investors from the sector.” The report recommends steps to “facilitate investment in the high-risk [field of] prospecting.”

Turkey’s Law of Mines has been amended 21 times over the past two decades, including at least five amendments in provisions concerning the issuance of mining permits. According to TEMA, one of Turkey’s leading environmentalist organizations, each amendment in mining laws has expanded the scope of lands open to mining, encroaching on farming fields, natural reserves, water resources and cultural heritage.

Along with Alamos Gold, US-based Newmont, Australia’s Chesser Resources and Canada’s Teck Resources Limited stand out among the foreign investors in the gold-mining sector in Turkey. Local actors include companies close to the AKP such as the Calik and Cengiz holdings as well as subsidiaries of deep-rooted Turkish conglomerates such as Eczacibasi, Nurol and Koc.

Despite so many amendments over the years, gold miners are eager for further incentives and legal changes. They may be dealing with a friendly government anxious for gold, but the civic resistance to environmental damage is only growing stronger. The persistent protest movement in Mount Ida has inspired similar protests in Artvin and Erzincan, on the opposite side of the country, and court struggles have yielded results. Nevertheless, the government has yet to step back. The latest bill facilitating license extensions is expected to easily pass the AKP-dominated parliament.