Egypt’s back on gold production map after loosening mining regulations

The gold industry in Egypt has recently witnessed a boom after the Egyptian government amended mining regulations to attract foreign investors, while President Abdel Fattah al-Sisi plans to build a jewelry-making city. 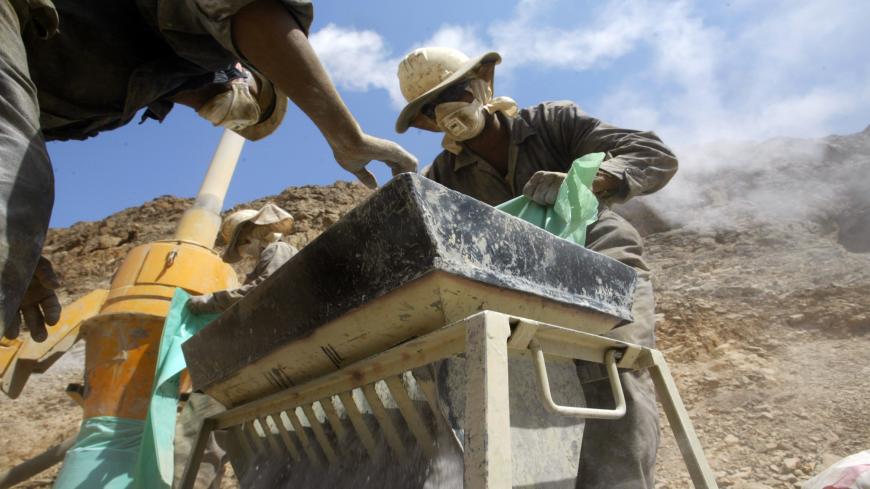 Workers manipulate mineral samples from a gold mine at Marsa Alam, in the Red Sea hills, Egypt, Sept. 14, 2006. - Khaled Desouki/AFP via Getty Images

CAIRO — Egypt's gold and jewelry exports have risen sharply in 2020, generating huge revenue for the country as it prepares to build its first jewelry-making city. The boom in gold production came after amendments to mining regulations two years ago, paving the way for more investments in this precious metal.

Gold, jewelry and gemstones exports increased during the first nine months of 2020, achieving a revenue of $2.444 billion, compared to $ 1.392 billion during the same period in 2019, a growth rate of 76%, according to the latest data released by Egypt’s Export Council for Building Materials, Refractory and Metallurgy Industries.

The London-based organization for gold industry, the World Gold Council, showed in its annual data that gold reserves in Egypt increased to 79.87 tons in the third quarter of 2020.

This increase in the extraction and export of gold was an expected result of the reforms introduced to the Mineral Resources Law No. 198 in 2018. The amended law has reduced the fees imposed on gold investors, attracting many international and local companies to mine for gold.

Omar Taima, former head of the Egyptian Mineral Resources Authority, told Al-Monitor over the phone, “After the amendments to the mining law, the world started paying attention to mining in Egypt and many companies have come to Egypt to invest in gold.”

One of these companies is the Canadian Aton Resources, which confirmed in a Jan. 4 statement that it is seeking to build the second gold mine in Egypt.

“Aton enters the new year with the minerals sector in Egypt now showing tangible signs of development, with optimism, purpose and a determination to succeed that is truly exciting. We intend to develop Egypt’s second operating gold mine at Hamama,” the firm stated.

The Canadian company obtained the license to work in Egypt last February, after the ratification of the new amendments. In addition to Hamama, it is also operating in the Rodroin and Abu Marawat sites, where the latter has “district scale potential and contains many exciting gold exploration targets,” Aton Resources added.

Wasfi Amin Wasfi, head of the gold division at the Federation of Egyptian Chambers of Commerce, told Al-Monitor that the field of gold exploration requires high technical capabilities, including satellite searches and other modern equipment. He pointed out that foreign companies’ investments are vital, because of their long experience in gold mining around the world.

In addition to attracting foreign investments, Egypt's return to the gold production map encouraged ordinary citizens to invest their money in gold bars and coins. Also, many local investors have installed labs for gold manufacturing in different parts of the country.

“During the past 10 years, large entities have been established to produce and manufacture gold. We have imported many gold-making machines … and with the availability of manpower here, we now have the ability to export a huge amount of gold jewelry,” Wasfi said.

He added that many pieces of jewelry manufactured in Egypt are exported abroad, especially to the United Arab Emirates (UAE), which is a market for selling gold and gemstones to other countries.

The UAE topped the list of countries that imported gold, jewelry and precious stones mined from Egypt in 2020. Abu Dhabi acquired about 69% of Egypt's total exports worth $ 1.495 billion, compared to $823 million in 2019, according to the latest data issued by the General Organization for Export & Import Control.

With the growing demand for Egyptian jewelry exports, the government has repeatedly expressed its aspiration to establish a gold-making city. This goal was met Jan. 16 when President Abdel Fattah al-Sisi ordered the start of procedures to establish an integrated city for gold industry and trade and provide all the financial resources to build it.

Taima said that Sisi's decision is important to the gold industry, adding, “Although it has been long delayed. If the state pays enough attention to the field of mining, the next stage will be the stage of the rebirth of mining in Egypt, and this will give a qualitative leap to Egypt's economy.”

Taima, who is currently president of the Geologist Company for Mining and Petroleum Services, noted that manufacturing any raw material in Egypt is the best way to achieve the maximum benefit from any product, and that is the purpose of establishing the long-awaited city for the gold industry. “After adding value-added taxes and other fees to the price of jewelry, this will generate a much higher revenue than simply exporting the product as an unprocessed material.”

Minister of Supply and Internal Trading Ali al-Moselhi said in an interview with the Egyptian newspaper Al-Shorouk Dec. 22 that he had communicated with the Ministry of Housing to allocate a plot of land in El-Obour city, northeast of Cairo, to build the city for jewelry-making. “According to the plans, the city will include 400 technical laboratories for gold production, and 150 other educational labs and a large school. It will also have a permanent exhibition throughout the year … while providing suitable exhibition spaces for traders in Egypt,” he said.