Egypt is working to increase the exploration of gold and minerals in the Eastern Desert with the aim of attracting investments in the mining sector. 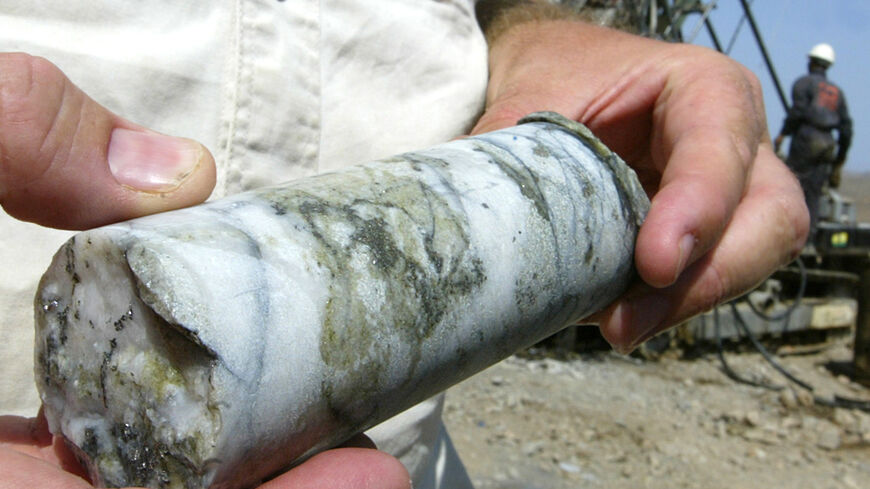 An Egyptian worker holds a mineral sample from the gold mine at Marsa Alam, in the Red Sea hills, Sept. 14, 2006. - KHALED DESOUKI/AFP via Getty Images

CAIRO — The Egyptian Ministry of Petroleum and Mineral Resources announced that Egypt granted eight mining exploration licenses for gold and minerals in the Eastern Desert as part of its efforts to increase investment in the mining sector.

In an official statement published June 1, the ministry said the eight blocks were awarded to English, Canadian and Egyptian companies.

According to officials from the companies who took part in the latest tender and were quoted by Reuters, 15 companies participated in the tender that closed in June 2021.

The new move comes in light of the Egyptian state’s growing interest to develop the Golden Triangle Economic Zone established by a presidential decision in 2017. The Golden Triangle project is seen as a major national development project that serves the southern part of Egypt. It is designed to set up a comprehensive urban community, including industrial, agriculture, mining, touristic and commercial projects, depending on the zone’s mining resources.

The Golden Triangle area, which stretches over an area of 2.2 million feddans, is located in the Eastern Desert between the governorates of Qena, Qift, Safaga and Qusair.

In this vein, Ali al-Idrissi, a member of the Egyptian Society for Political Economy Statistics and Legislation, told Al-Monitor, “The state is seeking to attract new investments in the Egyptian mining and mineral resources sectors, with the aim of making optimal use of both the undiscovered and exploited resources.”

He said that cooperation between the private sector and foreign investors will benefit the mining sector and the Egyptian economy in general, particularly since the exploration focuses on gold, which recorded explosive price behaviors against the backdrop of the current global economic crisis.

Idrissi indicated that the Mineral Resources Law involved some obstacles related to the licensing procedures, pushing some investors to refrain from participating in mineral exploration tenders. The amendments that were added to the law two years ago solved these problems and regulated the matter between the government on the one hand and the investors on the other, Idrissi added.

In early 2020, the Egyptian parliament approved amendments to the country’s Mineral Resources Law, which removed the profit-sharing rule (whereby the government takes about 50% of the profits of the foreign companies working on Egyptian soil) that had been unpopular among foreign investors. Later that year, Egypt awarded 82 exploration blocks to 11 companies.

Idrissi said, “We have unexploited natural gold and mineral resources in the earth. Their extraction will enable the state to benefit from them, by selling them or using them in some national industries.”

As part of the efforts to boost Egypt’s mining sector, Egyptian Petroleum and Mineral Resources Minister Tarek el-Mulla announced during the International Mining Conference held in Riyadh back in January that work is underway to build the first gold refinery in Marsa Alam in Egypt’s Eastern Desert to maximize the added value of gold resources so as to complete the gold’s mine-to-market value chain.

Meanwhile, preparations are currently underway to establish the City of Gold in the new administrative capital. President Abdel Fattah al-Sisi had ordered the establishment of the city in 2021, with the aim to reflect Egypt’s long history in gold manufacturing. The City of Gold will include workshops and schools to train skilled workers on the latest technologies in the gold manufacturing industry.

Sherif el-Demerdash, professor of international economic relations at Cairo University, told Al-Monitor that all natural resources are an asset to the Egyptian economy. “The more the extracted metal has a high value in the global or local market as a result of its scarcity, the greater the return.”

He explained that gold is considered a store of value that many use for investment purposes, while other minerals, such as copper, are viewed as basic industrial components.

Egypt contains a huge commercial gold mine, which is the Sukari Mine in the Eastern Desert operated by Australia’s Centamin. The mine was discovered in 1995 and came into production in 2009. It is one of the 10 largest mines in the world in terms of reserves and production, with a total value of gold and silver sales of about $650 million recorded in 2019.

Demerdash indicated that the state always looks at the economic feasibility of the extraction. The lower the extraction cost, the greater the return from this wealth, he said, adding that the decision to cooperate with private companies as investors or to carry out the extraction on its own depends on that.