The Egyptian government plans to add the taxes and royalties system to the new amendments of the Mineral Resources Law, thus replacing the current production-sharing system in place. 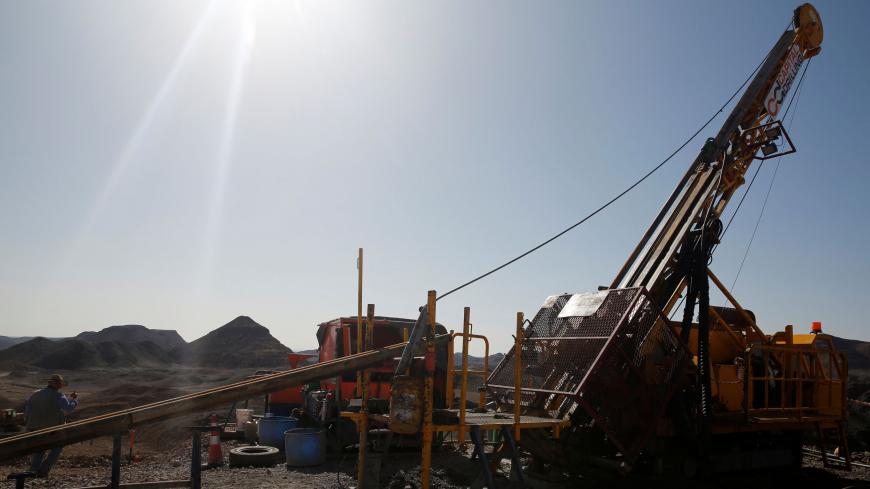 A drilling rig extracts core samples from the mineral-rich Arabian Nubian Shield in the Eastern Desert near the southern province of Luxor, Egypt, May 20, 2016. - REUTERS/Amr Abdallah Dalsh

CAIRO — A large number of investors and firms are awaiting the issuance of the executive regulations of the Mineral Resources Law that Egyptian President Abdel Fattah al-Sisi ratified the amendments of in August, with the aim of generating large investments in Egypt’s gold mining. According to the government’s forecast, this sector’s share in the gross domestic product is expected to amount to $7 billion in 2030, with 110,000 new jobs and $700 million worth of investments.

During an Oct. 4 meeting of the consultative committee tasked with amending the law’s executive regulations, Minister of Petroleum and Mineral Resources Tariq al-Mulla said, “Efforts are made to amend the law’s executive regulations in a way to avoid any negative aspects for investors in mining activity, and help promote governance and transparency via a balanced legal framework that regulates the work mechanisms in mines and quarries, incentivize and encourage investors, and preserve the state’s rights and returns from tapping the mineral wealth at the same time.”

He added, "It is important that the law’s executive regulations involve a mechanism facilitating the licensing procedures needed to do business," El Watan newspaper reported Oct. 4.

The Egyptian government is in the process of amending the gold ore exploitation agreements, by adding the taxes and royalties system to the new amendments of the Mineral Resources Law, thus replacing the current production-sharing system in place that shunned large investment firms in the 1990s.

In March 2018, Engineering for the Petroleum and Process Industries (ENPPI) and Wood Mackenzie signed a contract to develop the mining sector. Per the contract, Wood Mackenzie assumes the role of international consultant in order to conduct studies to diagnose the current situation of the mining sector and develop a relevant work vision. ENPPI provides the necessary technical and logistical support and needed reviews.

There are two companies operating in the production of gold in Egypt: Australia’s Centamin in Sukari mine and Cyprus’ Mats Holdings in Hamash gold mine. The Egyptian Mineral Resources General Authority (EMRA) obtains 51% of the profits, after the company recovers the investment costs, and a 3% royalty from Hamash, while it obtains 55% of the profits and a 3% royalty from Sukari.

In August, Sisi ratified Law No. 145 of 2019, amending some provisions of the mineral resources Law No. 198 of 2014, which parliament approved in July. The law seeks to set clear controls concerning the optimal exploration of Egypt’s mineral resources in the mines and quarries while guaranteeing the maximum possible returns to the national income.

The law also allows calling for tender for mining prospecting and exploration, upon a decision by the EMRA board of directors and following the approval of the relevant authority, under special regulations that include all of the necessary contracting and awarding conditions and selection preferences. The law states the need to take into account the Defense Ministry’s opinion on the requirements.

Investors and officials voiced varying opinions on the amendments to the Mineral Resources Law.

Yousef Rajhi, CEO of Pharos Gold Mines, rejects the idea of continuing the royalties system, particularly in the prospecting and exploration in mines, especially the gold mines. He told Al-Monitor that Egypt has a large mineral wealth that is not yet taken advantage of or explored.

Rajhi said that most of the countries with developed mining industries apply the taxes and rent system that foreign investors prefer.

Hamdy Zaher, former chairman of the Export Council for Mining Materials and Industries, told Al-Monitor, “The Egyptian government insisting on dealing with the mineral resources based on the returns and royalties will change nothing, even if thousands of laws and regulations were issued.”

He underlined that the mineral resources crisis in Egypt is not about the new law or new amendments, or even concessions or incentives to investors. He said that Egypt has huge mineral resources that are being wasted given the lack of a full strategy for a comprehensive management of the system.

He added that Egypt is rich in untapped mining ores, most notably the gold ores that are present in more than 140 areas, including Sukari, Fawakhir and Wadi Allaqi.

The World Gold Council’s 2018 report on gold demand trends reported that Egypt’s Central Bank gold reserves increased to 78.3 tons, i.e., 7% of the size of the international reserve component. Egypt came in 7th in the Arab world and 40th internationally.