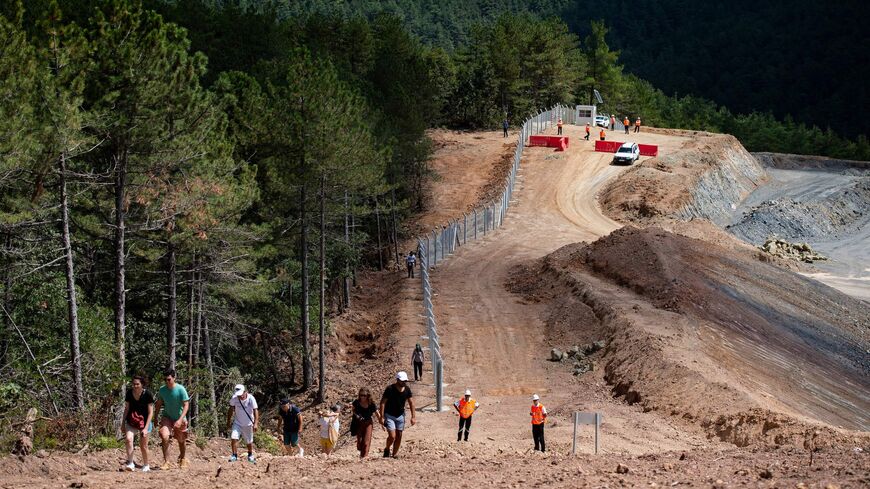 Environmental activists walk at the gold mine site by Canada-based Alamos Gold in a deforestated area in Turkey's northwestern province of Canakkale, near the town of Kirazli on Aug. 18, 2019. - YASIN AKGUL/AFP via Getty Images

ISTANBUL — The Canada-based mining company Alamos Gold announced Tuesday it would seek more than $1 billion from Turkey for “expropriation and unfair and inequitable treatment” regarding a halted gold mining project in the country’s northwestern Canakkale region.

In a statement Tuesday, Alamos said its Netherlands-based office would file an investment treaty claim against Turkey over the controversial Kirazli gold mine project, which stalled in October 2019 after its mining concessions expired amid protests against the development.

Located in Mount Ida, also known as Mount Kaz, the project was met with resistance from local residents as well as politicians in 2019 after large areas of forest were razed in preparations for the gold mine. Alamos acquired rights to develop the land in 2010 and said it had since invested over $250 million for the project, but halted construction after the Turkish government did not renew the company’s mining licenses.

“We have been shut down for over 18 months in a manner without precedent in Turkey, despite having received all the permits required to build and operate a mine,” John A. McCluskey, president and CEO of Alamos Gold, said in a statement Tuesday, adding, “The Turkish government has given us no indication that relief is in sight, nor will they engage with us in an effort to renew the outstanding licenses.”

Since the project stalled, Alamos said it tried to resolve disputes with Turkish officials, though efforts fell short when the company’s forestry permit expired late last year and the Agriculture and Forestry Ministry revoked Alamos’ mining license in March. The decisions would lose Turkey half a billion dollars in future economic benefits, according to the company.

In addition to the $1 billion treaty claim, which is based on the value of Alamos’ Turkish assets, the company also plans to take a $215 million impairment charge in its second quarter. Turkey's Ministry of Energy and Natural Resources did not respond immediately to requests for comment.

Turkish citizens organized protests against the Kirazli mine in 2019 over the project’s planned use of cyanide, a toxic chemical used in gold extraction that can contaminate water resources and cause extensive harm to the environment.

Dogu Biga Mining, a Turkish subsidiary of Alamos, also came under scrutiny after the company allegedly razed four times the number of trees than plans indicated in the mine area. In 2019, the Turkish forestry charity TEMA claimed nearly 200,000 trees were cut on the project site in contrast to Dogu Biga’s previously announced target of 46,000 trees.

In a 2019 interview with Reuters, McCluskey said the company had allocated millions of dollars to reforestation efforts, adding concerns over environmental damage and potential cyanide leaks were fueled by politically motivated “misinformation.”

Ali Furkan Oguz, a lawyer and former head of the Canakkale Bar Environmental and Urban Law Commission, said the Kirazli mine is one of several extraction projects in Mount Ida and that he would continue efforts to ensure Alamos’ permits are not renewed.

Oguz said he filed a criminal complaint to the Canakkale prosecutor’s office over the razed forest areas in Mount Ida that has yet to be finalized after two years of legal proceedings.

“We expect urgent rehabilitation work in the region where trees have been unfairly cut down and the natural landscape has been destroyed,” Oguz told Al-Monitor.

He added, “Authorities should not greenlight environmental impact assessments for projects that destroy nature," warning of "irreparable damage.”

Following the revocation of Alamos’ mining concessions in March, Ahmet Senturk, general manager of Dogu Biga, said the company retained a mining license good for 60 years, telling Bloomberg Alamos was “waiting patiently” for permits to develop of the area, though future delays could result in court proceedings.

The Kirazli gold mine was originally projected to produce about 100,000 ounces of gold per year over a six-year period.