Turkish fauna comes to the aid of flora as thousands of protesters — and their livestock — send a mining company packing, at least for now. 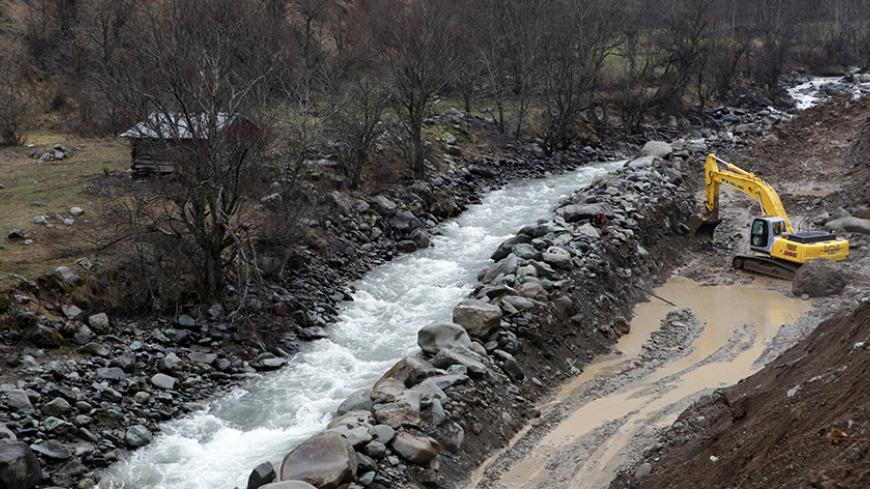 On the easternmost edge of Turkey’s Black Sea coast lies Artvin, a small province of 100,000 people known for its high per capita rate of higher education and its proclivity to leftist activism. Artvin’s picturesque forests are cited among the world’s top 100 in terms of natural riches, lying on a bird migration route and boasting a diverse ecosystem and endemic flora.

No wonder Artvin attracts hundreds of thousands of tourists each year. In the eyes of governments and companies, however, Artvin is a place where billions of dollars lie underground in the form of unexplored ores. This clash of viewpoints has for years made Artvin a base of resistance against mining projects, the biggest and most striking of which erupted Feb. 15.

Back in the summer of 2013, the people of Artvin lent strong support to the Gezi Park resistance in Istanbul, which infuriated then-Prime Minister Recep Tayyip Erdogan and earned him widespread international criticism for the excessive force he used to suppress the protests.

Artvin’s current resistance is having a similar impact on now-President Erdogan. This became evident when Erdogan blasted it as "junior Gezi." For the activists, however, this may have come as a compliment.

The current resistance started with a few tents that activists set up on Cerattepe, a lush hill overlooking Artvin city. Like Gezi, this has become a mass green protest of remarkable creativity. The similarity became even more pronounced when the government unleashed its security forces and tear gas vehicles after thousands of Artvin residents took to the streets Feb. 15 to join the activists who had camped at Cerattepe for 242 days. Marching arm in arm, the protesters blocked roads, some with the help of their livestock. The detentions and injuries from confrontations with the police failed to deter them. They were bent on keeping the earth movers away.

The controversy dates back to 1988 when a Canadian company embarked on a mining project at Cerattepe, where it discovered gold and copper ores. The people of Artvin, however, believed the natural beauty of their region was more precious than any precious metal and mounted a resistance. The company struggled to move on for years before it finally gave up in 2003. In 2008, thanks to the efforts of environmentalists, a court canceled the mining license for the area on grounds that mining activities would pollute water resources and create the risk of landslides.

Despite the court’s strong judgment, the Justice and Development Party (AKP) government held an open tender the same year. The winner leased its royalties to Cengiz Holding, owned by a top Erdogan crony. The people of Artvin were up in arms again. This time, in late 2014, the mining project was blocked by Turkey’s top administrative court, which ruled that mining activities would destroy indigenous life in the area.

Yet neither the government nor the company gave up. Though the drilling area remained the same, a new, favorable environmental assessment report was issued, and the relevant ministries were quick to approve it. In July 2015, Cengiz Holding moved to build a worksite at Cerattepe.

Let’s take a closer look at Cengiz Holding. Company founder Mehmet Cengiz figured prominently in the corruption scandal that rocked Erdogan’s government in December 2013, followed by the leak of dozens of implicating wiretaps. Cengiz became a household name thanks to a wiretap in which he expressed his business zeal with the memorable vow to “f*** this nation’s mother.” Known as the businessman closest to Erdogan, Cengiz presides over a company that has won the largest number of public tenders in the past 15 years, including giant projects for dams, bridges and Istanbul’s third airport, which have often brought it to loggerheads with both the courts and the public.

Given the company’s reputation, few were impressed by the statements it made after Feb. 15 to convince the Artvin folk of the mining project’s merits. To understand why, it is best to hear what the people of Artvin say.

Speaking to Al-Monitor, Nese Karahan, chairwoman of the Green Artvin Association, said, “If mineral exploration is allowed, the nature in the region will suffer extraordinary damage, while the gains of the state and the public will be very limited. What is over the ground is of greater wealth than what is underground. It can’t be brought back, once gone. If we let them proceed, Artvin will become history.”

Metallurgical engineer Cemalettin Kucuk said, “Cengiz Holding is not alone at Cerattepe. Eleven other companies are waiting in line. If you let them, they’ll go all the way to the Georgian border, riddling all natural beauty along the way. All engineering experts say the forests should be off-limits [to mining] and their flora and fauna should remain untouched.”

Geology engineer Oguz Kurdoglu pointed to a strong tradition of environmental awareness in the region.

“In Artvin, a village council would make a decision that not even a branch is cut from a certain hill, and all villagers would comply because they would know that a landslide risk exists at that spot. Anyone visiting Artvin is supposed to comply with the ban. The law of gravity is unfortunately still working!” Kurdoglu said.

“I’ll put it plainly — the place where Cengiz Holding is planning to drill is a landslide-prone area. A 1991 report by the state’s own Mineral Research and Exploration Directorate speaks of serious landslide risks in Cerattepe, up to the Coruh River’s bed.”

In a series of bold statements, the company insisted that no danger of landslides exist in the area, that Artvin’s water resources would sustain no damage, that no cyanide would be used for drilling and that the extracted minerals would be transported with cable cars without cutting roads through the forests. The company never managed to convince the locals. On the contrary, the resistance grew.

Activists organized solidarity demonstrations in other provinces, and hundreds of Artvin natives living elsewhere rushed to their hometown to support the resistance. At the end of the day, the earth movers were unable to start work, even after the heavy-handed response of the security forces.

With the protest wave spilling over across Turkey, Prime Minister Ahmet Davutoglu was compelled to take action, but he did not follow Erdogan’s example during the Gezi Park protests. After a two-hour meeting with both sides Feb. 24, he announced that work at Cerattepe was suspended until an ongoing judicial process on the issue was completed. The move injected some hope to the protest movement and the tensions subsided, pending the court’s next exploratory study in the area, set for March 24.

Only three days after the Feb. 24 meeting, however, Erdogan took the stage, blasting the protest and calling it a junior Gezi.

Given Erdogan’s great clout over both the company and the judiciary, his outburst overshadowed Davutoglu’s conciliatory approach, heralding fresh tensions. In a sign that the people of Artvin have lost nothing of their resolve, Karahan said, “Our resistance is not shrinking but growing. This is a vital struggle.” The upcoming days will show whether Erdogan or Davutoglu gets the upper hand in how the government treats the junior Gezi.