The world's biggest airport is planned for Istanbul and will come at an ecological cost. 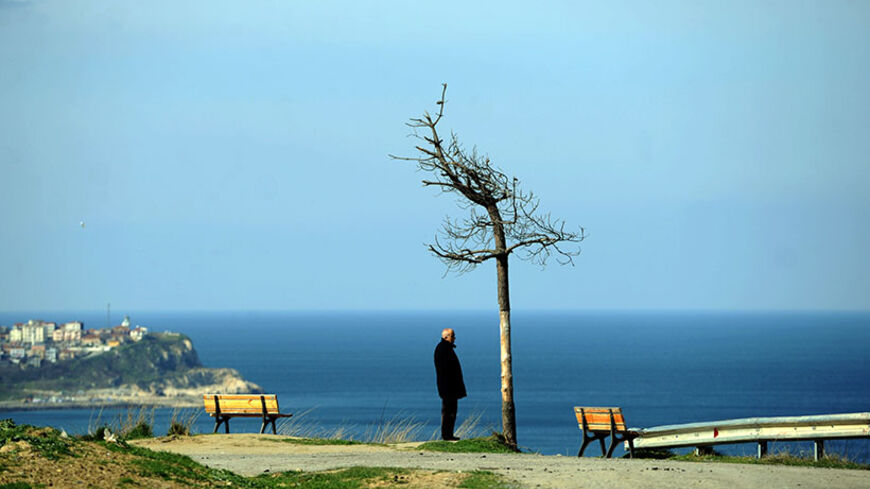 A man, standing next to a tree with the Black Sea in the background, looks towards the area where Istanbul's third airport will be built, Feb. 20, 2014. - AFP PHOTO/OZAN KOSE

Atlanta's Hartsfield-Jackson Airport served 94.5 million passengers in 2012, making it the highest-capacity airport in the world. Keeping this in mind gives one an idea of the sheer magnitude of the third Istanbul airport, which is being planned to accommodate 150 million passengers annually.

Prime Minister Recep Tayyip Erdogan personally broke ground for the new airport on June 7. Most of his speech on the occasion was reserved for criticizing and reprimanding those who oppose the project. According to Erdogan, certain groups in Turkey — under the pretext of protecting the environmen and preserving ecological systems — are trying to block the major steps his Justice and Development Party government is taking to promote growth for Turkey and its economy.

In speech at the ceremony, Erdogan referred to these groups as “deeply ignorant,” saying: “They don’t care about trees, saplings or flowers. These people think they are leftists, environmentalists, nationalists, anti-capitalist Muslims and the opposition. But they have never understood that they are being used as pawns in an anti-Turkey offensive.”

Thus, Erdogan branded anyone questioning this project as “pawns of external forces.”

Backed by a docile media that rarely mentions the concerns people might have about projects promoted by the government, Erdogan has succeeded in marginalizing those opposing the third airport and other major undertakings. He depicts them as people whose objections are mere figments of their imagination. In the case of the airport, however, the environmental effects assessment prepared by the Ministry of Environment and posted in its website clearly identifies some of the colossal environmental and ecology problems this project, covering 76.5 million square meters, is going to cause. Among the issues and concerns noted are the following.

Although the report provides some idea of the potential damage to the environment, some of the information provided earlier by the Ministry of Environment on its website was even scarier. According to that, 657,950 trees will need to be removed, and 1,855,391 will have to be replanted elsewhere. Keeping in mind that the process of relocating tress will be done by contractors, and that there are no sanctions if they fail to do so, one can surmise that millions of trees will simply be destroyed.

There may be those who think such a cost is acceptable to build the world’s largest airport, but selecting a much less forested area of Istanbul could have reduced the cost. The Northern Forest Defense (KOS), an environmental protection group, insists that the selection of the heavily forested area was Prime Minister Erdogan's personal decision. The master environmental plan for metropolitan Istanbul, considered the “constitution of Istanbul,” had suggested Silivri-Gazitepe as the location for the third airport, but according to KOS, under pressure from Erdogan, the Yenikoy-Akpinar villages in the northern forests were selected.

The 22 billion euro ($30 billion) project was awarded to Limak-Kolin-Cengiz-Mapa-Kalyon, a joint ventures group, after bidding. KOS notes that this consortium has in recent years won a number of big contracts awarded by the government. Two of these companies, Kalyon and Cengiz, were targets of the second wave of corruption investigations that began Jan. 25. All the police and prosecutors involved in that operation, however, have since been reassigned, and the details of this intricate economic web was never made public.

The huge Istanbul airport is not the only project threatening to destroy the Northern Forests. The second canal planned parallel to the Bosphorus Strait and the third suspension bridge, already under construction, also bode ill for the area. The canal alone has the potential to create an “ecological disaster.” A huge area of forest has already been destroyed for the bridge.

A pig herd that swam across the Bosporus after the destruction of their natural habitat surprised everyone. A protester against the third airport was recently seen carrying a placard that asked, “Are the pigs going to fly out, too?”