Istanbul’s giant new airport, scheduled to partially open in October ahead of key elections next year, has become a headache that threatens to carve a black hole in Turkey’s public finances. 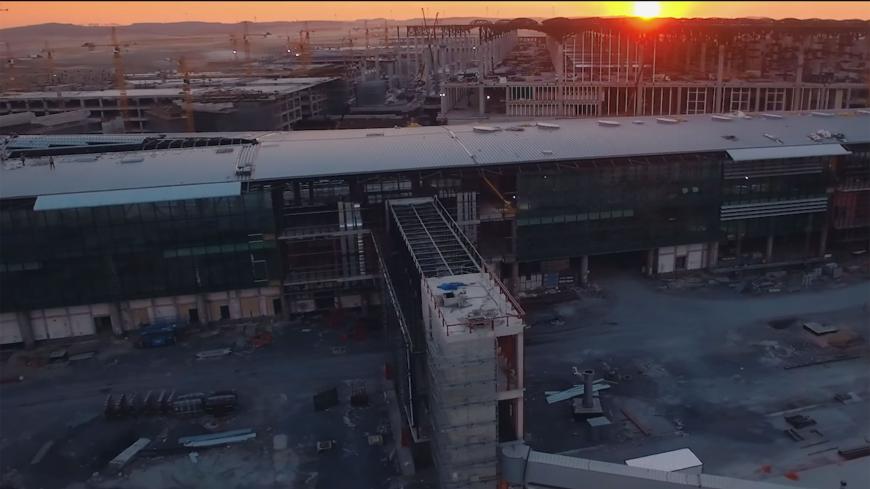 Turkish President Recep Tayyip Erdogan served as the mayor of Istanbul before ascending to the helm of the country as prime minister in 2003. During a television debate in 1994, he voiced strong opposition to a proposed third bridge over the Bosporus to the lush, forested area north of Istanbul. According to the then-mayor, such construction would be “a serious mistake” because it would serve the interests of rent-seekers while “destroying [Istanbul’s] remaining lungs” in the area.

The environmental plans for Istanbul — considered the city’s constitution and updated most recently in 2009 — put the northern areas off limits to development and all kinds of public and private investment to protect the city’s remaining forests and water basins. Yet Erdogan — who put his signature on the plans as a mayor — removed the red line in 2013 as he spearheaded projects to build a third bridge over the Bosporus, complete with belt highways and a third airport for the city, flouting the huge environmental damage.

Both projects were based on the build-operate-transfer model of public-private partnership. In return for 25 years of operational rights, the companies would pay certain rents but would enjoy profit guarantees by the government. Accordingly, the Treasury would pay the difference if traffic through the bridge and the airport fell under the guaranteed figures.

In addition to the two giant projects that are meant to complement each other, yet another involves the construction of an artificial waterway called Canal Istanbul — the preparatory work for which becomes a topic for discussion, especially during election times.

The third bridge is already operational but underperforming. The construction of the new airport, meanwhile, is planned to be completed in stages. The facility is scheduled to become operational on Oct. 29, the 95th anniversary of the modern Turkish Republic, with an initial capacity of 90 million passengers per year. The inauguration will mark the closure of Ataturk Airport, Istanbul’s main air hub at present. According to Funda Ocak, the head of the State Airports Authority, Oct. 29 is the date for the inauguration ceremony, while actual moving in will start at 3 a.m. on Oct. 30 and end at 11:55 p.m. on Oct. 31. Turkish Airlines, the national carrier, will halt its flights for 12 hours at 2 a.m. on Oct 31 and move its aircraft to the new airport by road.

The airport project was awarded in 2013 to a consortium of business groups with close links to Erdogan, namely Kalyon, Cengiz, Limak, Kolin and MNG. The same companies have stood out in public projects for years, winning tender after tender in major sectors such as power distribution and the construction of subways, tunnels and dams. The thriving companies have responded in kind, financing the Sabah-ATV media group, which is organically linked to the president.

According to the consortium company IGA, in which the partners have equal shares, the new airport will reach an ultimate capacity of 200 million passengers in 2028, when all construction stages are completed. Under the contract, the company gets operating rights for 25 years, during which it commits to paying the government 22 billion Turkish liras ($5.8 billion). In return, the government has allocated more than 7,000 hectares of land for the project and mobilized public banks for financing, in addition to other assistance.

One of the controversies surrounding the project pertains to the size of the allocated land. In a research note on the issue, BETAM — the research center of Bahcesehir University — draws a comparison to Hartsfield-Jackson Atlanta International Airport, stressing that it has five runways and covers an area of 1,900 hectares, while Istanbul’s new airport will have six runways but has been allocated a much vaster land of about 7,400 hectares. The study then makes a comparison to Ataturk Airport, saying, “Roughly calculated, Ataturk Airport is established on an area of 1,178 hectares and has a traffic of 45 million passengers [per year]. When the new airport’s traffic reaches 150 million passengers, this would require a capacity approximately three times bigger than that of Ataturk Airport. Based on this, we estimate that the new airport needs an area of 3,500 hectares. Even if we assume that passenger numbers meet the expectations, it remains questionable whether an area as vast as 7,400 hectares is [really] needed.”

According to IGA, the utilized land is even bigger: 7,650 hectares. So why allocate such a vast amount of land, which is apparently more than double of what the airport requires? Because the project also involves the construction of an airport city next to the airport. On this aspect of the project, IGA offers the following information: “The airport city, which we plan to build in a vast area stretching from the outside of the terminals to the southern boundary of the airport, will have office buildings, airport hotels, a mosque, a conference and exhibition center, a shopping mall, a medical center and training facilities.” No doubt, the airport city is a no less profitable opportunity than the airport itself.

The project also guarantees profits to the contractors, meaning that the Treasury will make up for any gap between the guaranteed and actual number of passengers. According to BETAM’s optimistic estimates, the Treasury will have to pay close to 93 million euros ($114.3 million) from the central government budget if the number of passengers fails to exceed 80 million per year, and 154 million euros ($189.1 million) if traffic remains below 68 million passengers. Of note, the traffic at Ataturk Airport stood at some 60 million passengers on average in the past four years.

Apart from the generous land allocation and profit guarantees, the contractors have enjoyed support in getting loans from public banks after their attempts to secure financing from abroad failed. According to the World Bank, loans worth $5 billion have been used in the first phase of the $35 billion project. Private Turkish banks Finansbank, Denizbank and Garanti issued only about $1 billion of those loans, while the remaining bulk came from public banks Halk, Ziraat and Vakif. Pundits see the possibility of financial strains for the three public banks in the future, given the magnitude of the risk they have taken.

On the labor side, about 30,000 people have worked in difficult conditions on the construction of the airport, which has been marred by deadly work accidents. Last month, the Labor Ministry said 27 workers had died since construction began in May 2015, denying reports that about 400 workers had perished and that most incidents had been covered up through compensations to the families of the dead.

Crucial elections next year lurk behind the haste to get the first phase ready for Oct. 29, despite an important drawback, namely the delay in the construction of a metro line to the airport. According to Development Ministry data, the 34-kilometer (21-mile) metro line between the airport and Gayrettepe, a downtown area on Istanbul’s European side, will be worth 5.5 billion Turkish liras ($1.4 billion) — with only 1 billion lira in work slated for completion by the end of 2018. Full completion is scheduled for 2022. By then, access to the airport is expected to remain a major problem, with reports suggesting that travelers will be forced to use the idle third bridge.

In sum, Istanbul’s newest airport — intended to capitalize on the city’s strategic location between continents — is headed for an opening ahead of key elections mired in myriad problems from huge environmental damage of lavishly allocated public land to poor access and looming burdens on public finances. Unfortunately, the likelihood of it becoming a financial black hole for Turkey is high.