The company operating Istanbul’s new mega airport appears unlikely to hold on for even a few months without assistance, as the COVID-19 pandemic hits Turkey’s aviation industry. 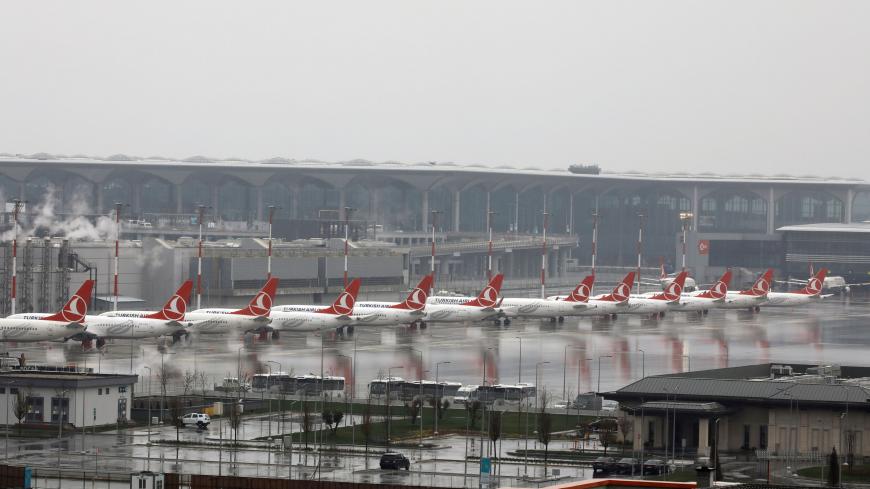 Turkish Airlines planes sit on the tarmac during the outbreak of the coronavirus, Istanbul Airport, Turkey, March 29, 2020. - REUTERS/Umit Bektas

Istanbul’s new mega airport — a pet project of President Recep Tayyip Erdogan — has plunged into dire straits only a year after it became operational as the aviation industry reels from the COVID-19 crisis.

With air travel largely suspended across the world as part of measures to contain the pandemic, Turkey’s aviation sector — a rising star of the Turkish economy in the past two decades — has all but plummeted. Not only airline companies but also airport operators — many of them public-private partnerships — are bracing for huge losses.

Standing out among them is the Istanbul Airport, which became operational in April 2019 and was already under financial strain. The posh hub — mired in controversy over its economic viability and environmental impact since its inception — has seen its ambitious targets blown to smithereens by the pandemic. How its operator will keep afloat is a big question mark.

While a damage assessment for the Turkish aviation sector has yet to be drawn up, the International Air Transport Association (IATA) warned April 14 that, globally, the COVID-19 crisis would see airline passenger revenues drop by $314 billion this year, a 55% decline compared to 2019, in a scenario of severe travel restrictions lasting for three months. According to the IATA, the livelihoods of some 65.5 million people across the world are dependent on the aviation industry, including sectors such as travel and tourism. Among them are 2.7 million airline jobs. The IATA estimates that some 25 million jobs in aviation and related sectors are now endangered, including 11.2 million in the Asia-Pacific region, 5.6 million in Europe, 2.9 million in Latin America, 2 million each in North America and Africa and 900,000 in the Middle East.

To prop up the sector, governments have announced various measures: direct financial support, credit guarantees, the purchase of corporate bonds and tax waivers. Still, talk is abuzz that many countries might be eventually forced to nationalize their flag carriers.

In Turkey, the COVID-19 crisis hit the sector at a time when it was aiming for higher skies, having expanded remarkably since the 1990s, drawing on Turkey’s location at the crossroads of continents, which, in the global world, grew into a major advantage. Istanbul, for instance, is within a narrow-body range of 40% of worldwide air traffic, including more than 60 capitals and all of Europe, the Middle East, Central Asia and North and East Africa. The geographical advantage drove fresh investments in the aviation industry, which were often financed with foreign loans.

Turkish Airlines, the national flag carrier and the engine of the expansion, was restructured to enlarge its market, especially among foreign passengers. The company’s fleet and foreign destinations grew rapidly, while more private companies entered the sector. Domestic air travel was similarly encouraged, coming on par with the share of international flights. Last year, the sector handled 209 million domestic and international passengers, a 536% increase from 33 million in 2003.

Among the new airports erected across the country, the Istanbul Airport was the most ambitious. Construction of the project — awarded to a consortium close to Erdogan — began in 2013 with the stated aim of meeting the shortfall in Istanbul’s airport capacity. Yet, when the new airport became operational last year with a capacity to handle 90 million passengers per year, the city’s iconic Ataturk Airport, which had a capacity of 60 million passengers, was closed down. Moreover, in a move precluding any possibility of reopening the Ataturk Airport, its two runways were destroyed last week as part of construction on a new hospital, which, the government says, is needed for the pandemic.

The passenger data from March illustrates how the pandemic has hit Turkey’s aviation industry. The sector handled only 7.3 million passengers last month as travel restrictions were introduced, down from 12.3 million in February and nearly 14 million in January. The number of passengers decreased 30% from February on domestic flights and 54% on international flights, which served only 2.5 million people.

Airport operators are similarly in hot water. The Istanbul Airport, which was built as a private-public partnership, has taken severe blows, risking to become a pandemic wreck in its own right. IGA, the company operating the airport, is saddled with hefty foreign loan debt and is supposed to pay the state 886 million euros ($962 million) in annual rent. Its rent payment was already deferred last year. The government, meanwhile, has given the company passenger guarantees, meaning it would pay the difference if the number of departing passengers falls under the figure guaranteed in the contract.

IGA said it served 55 million passengers last year after the airport became operational April 6. But, with the sharp downturn since March, the company appears unlikely to hold on for even a few months without assistance. It might end up nationalized or taken over by the sovereign wealth fund.

While airliners and airport operators brood on their uncertain future, the State Airport Authority has yet to announce a crisis package and continues to charge aircraft parking fees and rent from grounded companies as if nothing has happened.

The Civil Aviation Directorate, meanwhile, has announced only a 50% discount on licensing and renewal fees. Other facilities include a regulatory change allowing for the leasing of grounded planes and a one-year deferral of compensation payments to passengers. Obviously, the industry remains unsatisfied, expecting more far-reaching measures.