Led by national carrier Turkish Airlines, Turkey’s civil aviation sector has grown impressively since 2003, but its heyday may be over due to the strain of economic and political factors. 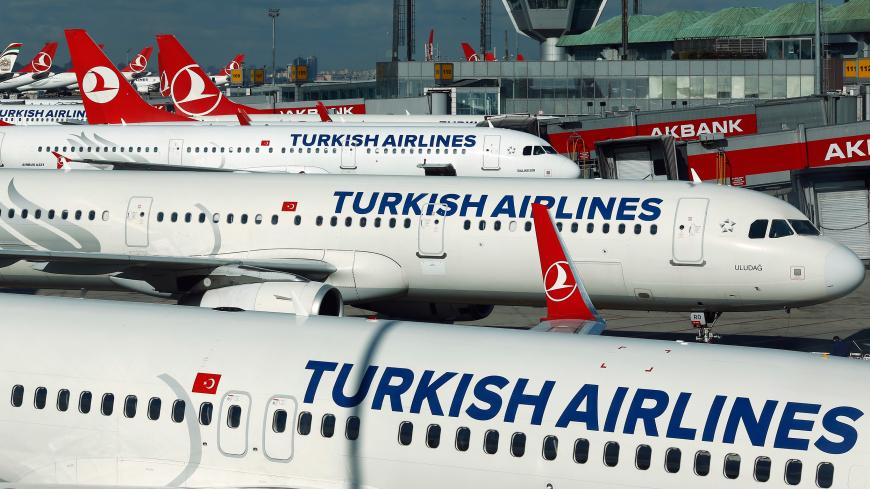 One of the most notable transformations that Turkey has seen under the Justice and Development Party (AKP) over the past 15 years was in the civil aviation sector. It was a real boom, both on domestic and international levels. The sector’s staggering expansion, however, was not without risks, and the dirt long swept under the carpet has begun to stink.

The expansion drew on a valuable potential bestowed by geography, namely Turkey’s location as a crossroads between Europe, Asia and Africa. According to Turkish Airlines (THY), the country’s national carrier, narrow-body aircraft capability to and from Istanbul covers 40% of worldwide international traffic — over 60 national capitals and all of Europe, the Middle East, Central Asia and North and East Africa.

But why did the boom have to wait for the post-2003 period? Was it the outcome of some extraordinary skills of the AKP? Not really. Even before the AKP came to power in 2002, civil aviation was on an uptick, though at a slower pace. In 2002, passenger traffic stood at 34 million, up from 10 million in 1988.

What fueled the boom after 2003 was the abundant inflow of external funds, driven by International Monetary Fund-backed structural reforms in the economy after a severe financial crisis in 2001. Although at the expense of increased borrowing, integration with the global economy accelerated and put Turkey on a path of stable economic growth. This meant both an increase in the disposable income per capita and an opportunity to invest in civil aviation.

As a first step, the government moved to expand domestic air transport by rapidly increasing the number of airports across the country, both through the construction of new airports and the makeover of military ones. Turkey today has 55 airports, the largest of which have been built and are operated by the private sector. Airports operated on a public-private partnership (PPP) model handle 70% and 97% of Turkey’s domestic and international passenger traffic, respectively. The third airport for Istanbul, a giant $14 billion facility currently under construction, is also a PPP project, designed to handle 200 million passengers per year.

In a further boost to the aviation sector, the government offered incentives that removed customs duties on jet fuel, encouraged investment in charter services and motivated the creation of new private airliners such as Pegasus.

Leading the sector’s rapid expansion was THY. The national carrier was restructured with a view of enlarging its foreign passenger market in particular. In a short period, the company significantly expanded its fleet and added scores of new routes.

At the end of 2016, Turkish airlines had 540 planes (515 passenger aircraft and 25 cargo planes) with a capacity of more than 100,000 seats. Some 38% of that seat capacity belongs to THY, which has 223 planes and controls about half of the market in both domestic and international flights. In a bid to increase its share further, the company plans to expand its fleet to 342 aircraft by 2020.

THY’s increase in international flights drew mainly on transfer passengers, those with connecting flights in Turkey. As member of the Star Alliance, the global partnership of airlines, the company grew by luring passenger traffic especially from United Airlines and Lufthansa. Its Star Alliance membership made Istanbul an attractive global stopover hub.

Some, however, argue that the motives behind THY’s expansion were not purely economic and had a political dimension — to boost Turkey’s image as a “rising” country, regardless of financial costs. This was the reason why, they say, the company began flying to the four corners of the world.

Some believe THY’s geographical expansion had to do with the growing international activities of the Gulen community, which was the AKP’s chief political ally until their alliance began to unravel in 2012.

Another argument is that some company decisions were meant to facilitate the overseas investments of entrepreneurs close to the AKP. Bahattin Yucel, a former tourism minister who remains a vocal opinion leader in the tourism sector, said as much in a newspaper interview in July 2016.

Yucel questioned THY’s choice of new destinations, arguing that the company showed little interest in the markets that the Turkish tourism industry targeted. Alluding to a prominent Turkish hotelier known to be close to the government, he said, “Curiously, THY launched flights to [the Egyptian resort of] Sharm el-Sheikh as soon as the person who says that one Arab tourist is worth five Russian ones leased a hotel there. And it offered very good prices, charging 505 Turkish liras [$133] for a round trip to that airport. The distance [from Istanbul] to Sharm el-Sheikh is 2.7 times longer than the distance between Istanbul and [Turkey’s Mediterranean resort of] Antalya. In the same period, however, the price of an Istanbul-Antalya flight was 548 Turkish liras [$145]. This is called favoritism.”

Yucel charged that THY had also catered to the interests of the Gulen community. “The THY inaugurated routes to remote corners in Africa. It is obvious that those routes were launched with state support to provide help and logistics to Fethullah Gulen’s organizations in Africa. They have fallen out with each other now, but this doesn’t eradicate the truth,” he said.

THY has been growing through external borrowing, the cost of which is on the rise. The company relies on imports for fuel, which is the main cost item, and jet fuel prices are on the rise as well. Moreover, domestic and external political tensions have amplified Turkey’s risks, leading to market losses. As a result, THY closed 2016 with operating losses of 374 million liras ($98.7 million). The setback is said to have been partially compensated in 2017, a year of high growth for the Turkish economy, but things will become clear only when the company releases its balance sheet for last year.

An issue that lacks transparency is the status of THY. Is it a public company? The state owns 49% of company shares, while the remaining 51% are traded on the stock exchange. The company remains in the category of public entities linked to the Treasury, but it has been off-limits to an audit by the Court of Accounts, which controls public institutions on behalf of parliament. Moreover, THY’s public shares have been transferred to the Wealth Fund, a controversial sovereign fund created in 2016. With all of those factors at play, a transparent analysis of THY and monitoring its past and potential turbulences becomes difficult. The company’s expected — and somewhat forced — relocation to Istanbul’s new airport, scheduled to open in late 2018, heralds another bumpy process, the turbulence of which is likely to be even bigger.