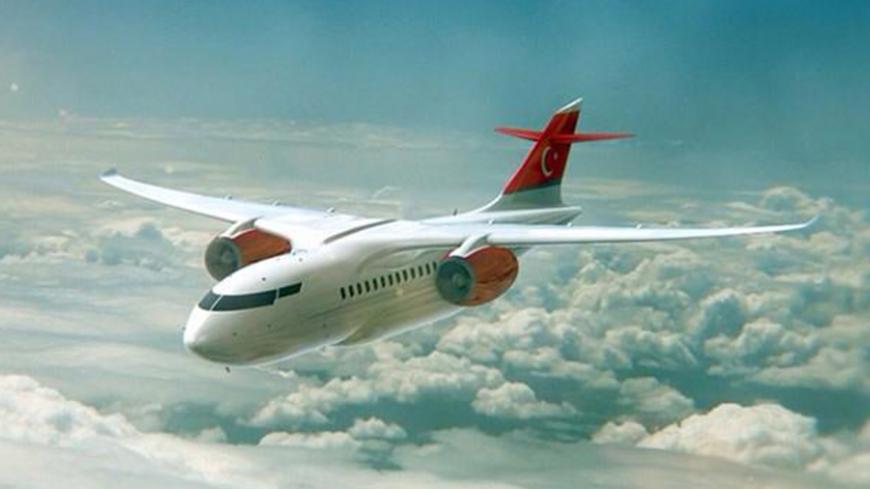 Turkey’s first passenger jet project is experiencing turbulence. The TRJet program is expected to produce the country’s first regional passenger jet by 2019, but there is a problem. According to Hurriyet newspaper’s Washington correspondent Tolga Tanis, the Turkish Undersecretariat for Defense Industries has informed TRJet’s lead manufacturer, Sierra Nevada Corporation (SNC), that at least 70% of the new aircraft must be produced in Turkey. Based in the United States and owned by the Turkish American husband-wife couple Fatih and Eren Ozmen, SNC argues that a 70% target before 2023 is unrealistic.

Additional reports in the Turkish press and by experts who spoke to Al-Monitor point to bigger problems that could keep the billion dollar TRJet project grounded come 2019. On the one hand, demand from domestic and international airline companies may be insufficient. Furthermore, although Turkish President Recep Tayyip Erdogan and Prime Minister Ahmet Davutoglu hope the experience and know-how from the prestige project would help to expand Turkey’s still-infant defense and aerospace industries, whether the country’s state-owned Turkish Aerospace Industries (TAI) will be involved in TRJet is still unclear.

To appreciate the emotional weight of a domestically produced airplane for Turkey, a short history lesson is in order. In the 1930s, the country’s leading entrepreneur Nuri Demirag worked on civilian airplane prototypes with a view for mass production and export. But World War II, a freak accident and a destructive legal dispute with the Turkish Air League, which had pledged to purchase planes from Demirag, killed off the enterprise by the mid-1940s. Many Turks mistakenly came to believe that their country’s burgeoning alliance with the United States destroyed their infant aircraft industry.

Turkey continued to grapple with producing its own aircraft during the Cold War. In the wake of the Cyprus war of 1974 and the US arms embargo that lasted until 1978, the country embarked on a “produce your own plane, your own ship, your own tank” campaign. Though full self-sufficiency in aircraft production did not go far, in an ironic twist, TAI began to manufacture F-16 fighter jets with a US license in the 1980s.

In the 1990s, bad luck and financial bottlenecks reminiscent of the Demirag episode denied TAI the chance to make headway with project HD-19 (Hava Dolmusu — literally “Sky Shuttle”). Similar to TRJet’s objectives today, HD-19 would have formed the backbone of a series of short- and medium-range passenger aircraft and enabled TAI to manufacture the sorts of jets that Brazil’s Embraer S.A. successfully produced from the late 1990s onward. Today, the Brazilian company is a major global player in the regional and medium-range aircraft market.

TRJet has to overcome several obstacles before it could attain a similar status. For one, detractors question whether the project is “national” at all. They call attention to the fact that the first model for the TRJet, the 32-seat TRJ328, will be a copy of the Fairchild Dornier 328JET. One opposition newspaper quipped, “German-made ‘native aircraft’ coming.”

SNC admits that it has acquired the license for the Fairchild Dornier model, which it will use to produce a modernized and upgraded version of TRJ328. With the more advanced 70-seat TRJ628, however, SNC CEO Fatih Ozmen pledges to deliver “Turkey’s first domestically designed passenger aircraft,” which will be “fully designed and manufactured by Turkish engineers, [and] Turkish-based suppliers are expected to … furnish aircraft parts.”

But a Turkish aerospace engineer who spoke to Al-Monitor on condition of anonymity is skeptical. The engineer argued that STM A.S., the state-owned contractor that will partner with SNC to produce TRJet, has never handled anything of this scope. He said, “Neither SNC nor STM have experience producing complicated airframes or avionics the way TAI has done with the F-16 or other Turkish Air Force projects.” He added, “TAI even produces plane bodies and wings for Boeing and Airbus,” and asked, “Why buy someone else’s license instead of producing an authentic aircraft? Is that not too much for a country such as ours, facing an awful current accounts deficit?”

Even if design, authenticity and production did not constitute a problem, there may not be enough demand for TRJet within Turkey itself. The engineer pointed out that the national flag carrier Turkish Airlines (THY) has not expressed interest in the proposed plane. He said, “SNC claims it could sell 1,000 or more of the TRJet to domestic and international customers, but that may be a tall order. Despite the drop in crude oil prices, fuel is still expensive [in Turkey] while short-distance air fares remain relatively cheap. When you listen to [Turkish Airlines] CEO Temel Kotil, he says that any plane that carries less than 100-120 passengers loses them money.” Indeed, during a meeting with the leaders of Turkey’s leading airline workers’ union last month, Kotil did not mention TR Jet at all but expressly stated that his company would meet its short- and medium-range aircraft needs with the Boeing 737 MAX.

Bleda Kurtdarcan, a global security analyst and lecturer at Istanbul’s Galatasaray University Faculty of Law, thinks that might have something to do with Turkish Airlines’ recent experience with regional jets. “THY had a bunch of British Aerospace RJ70s and RJ100s in the 1990s and 2000s to serve smaller airports but then dropped them from the fleet,” Kurtdarcan told Al-Monitor. “Even today, only nine or 10 Embraer 190s are with Turkish Airlines and [THY’s low-cost carrier] AnadoluJet.”

In an email response to this author, TRJet general director Cem Ugur wrote that his company is “committed to manufacturing a globally competitive and technologically advanced aircraft that maximizes the contribution of Turkish engineers, designers and vendors,” which would make TRJet “a Turkish aircraft.” Regarding the alleged lack of market interest in short- and medium-range aircraft, Ugur exuded confidence: “Our market research indicates there is a gap in the aging 30-seat and 50-70 passenger aircraft market. There are approximately 2,500 aircraft of this size operating today, all maturing or reaching the end of their life cycle. We see this replacement market as an opportunity.”

One hopes Ugur is right and that such outstanding issues are resolved equitably. It would be a shame if Turkey fails to fulfill its decades-long dream of designing and producing its own aircraft or, worse, needlessly spends billions of liras to that end. But it would be an equally great shame — much like Demirag in the past — if a successful Turkish American company were to lose money by dealing with Ankara’s Byzantine and capricious political games.