Turkish authorities are scrambling to prop up Istanbul’s new airport as the costly facility faces various strains that might result in major burdens on public finances. 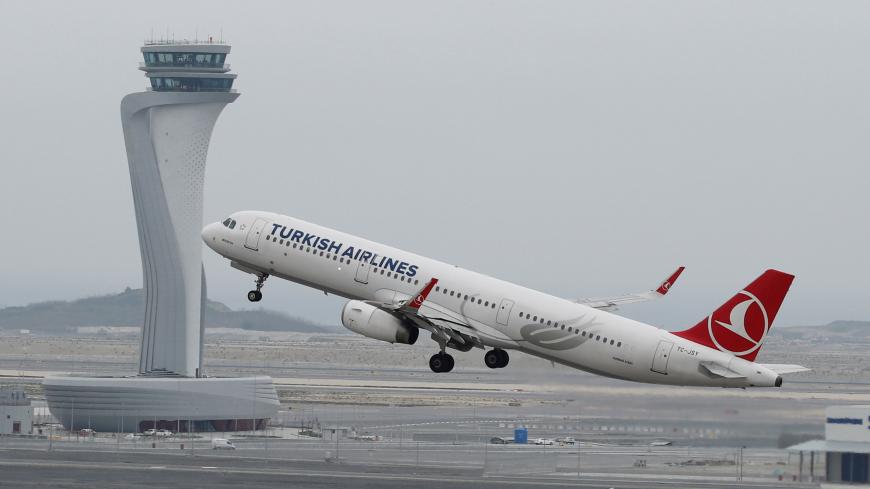 A Turkish Airlines Airbus A321-200 plane takes off from the city's new Istanbul Airport in Istanbul, Turkey, April 6, 2019. - REUTERS/Umit Bektas

Less than a year after it became fully operational, Istanbul’s posh new airport is already vindicating critics who had argued that the project is irrational and would create a financial “black hole” and major environmental damage. The Justice and Development Party (AKP) government, which paid little heed to the concerns, is now openly bestowing favors to the airport to prop up its performance. To channel travelers to the new airport on Istanbul’s European side, the authorities have shut down the city’s iconic Ataturk Airport and are now raising barriers to restrict traffic at the Sabiha Gokcen Airport on the city’s Asian side.

The new Istanbul Airport has already seen its reputation suffer amid delays and diversions due to strong winds in the area, a problem that was exacerbated in early January. Yet passengers are increasingly being stripped of alternatives.

The directorate-general of civil aviation, which is attached to the Transport and Infrastructure Ministry, announced last week that it would no longer accept applications to add new flights at Sabiha Gokcen Airport “to head off problems stemming from [the airport’s] inadequate capacity.” The statement also cited “ongoing maintenance work and heavy traffic.”

Earlier, Turkish Airlines, the national flag carrier, terminated some of its domestic flights to and from Sabiha Gokcen, and handed international flights over to its subsidiary AnadoluJet. As a result, many Turkish Airlines flights were moved to the Istanbul Airport. Now, with authorities citing inadequate capacity at the Sabiha Gokcen, applications for new flights are being diverted to the Istanbul Airport in what is clearly favoritism.

Indeed, Sabiha Gokcen is said to still have spare capacity. According to a Jan. 17 report by the daily Cumhuriyet, “sectoral sources familiar with the matter” say Sabiha Gokcen operated on a 78% runway capacity and 80% terminal capacity last year. “There is no capacity problem. Clearly, the aim is to channel passengers and airliners to the Istanbul Airport instead of the Sabiha Gokcen Airport,” the daily wrote.

Sabiha Gokcen, operated by Malaysia Airports, handled 35.5 million passengers in 2019, well below its capacity of 41 million capacity, the sources said, noting there was no technical capacity problem to justify the denial of fresh flight applications. The construction of a new runway at the airport, meanwhile, has been dragging on for four years. This delay, too, is widely believed to be linked to efforts to channel flights to the Istanbul Airport.

In 2019, Turkish Airlines saw a decline in its passenger numbers and profits, owing mainly to Turkey’s economic downturn, but also to losing passengers to Pegasus, its main domestic competitor, which uses Sabiha Gokcen. Hence, limiting traffic at the airport is aimed also at curbing such shifts in passenger preferences. How Malaysia Airports will react to the restrictions remains to be seen.

The main reason why the Istanbul Airport is in need of favors is that the project was ill-conceived from the very beginning. The location of the facility, the layout of its runways, financing risks and overambitious targets and expectations have all had negative effects on the project.

This strategic mistake amounts to squandering a major potential, given that Turkey’s location at the crossroads of continents constitutes an important advantage in civil aviation. Istanbul, for instance, offers flight capability without refueling on 40% of worldwide international routes, including to more than 60 capitals and all of Europe, the Middle East, Central Asia and North and East Africa.

To make the best of this big geographical advantage, the civil aviation sector needed financing and viable investments. But years ago, when external loans were relatively easy to secure, Turkish Airlines’ expansion was poorly managed, and the subsequent decisions on the construction of a new airport turned out to be unsound, too. Now the government is scrambling to rectify those mistakes by stretching the means of the state.

The location chosen for the new airport is seen as the biggest blunder. The area is not flight-friendly. The airport is now exposed to strong winds, lies on a major bird migration path and has a poor runway layout. As such, it poses a high flight risk, which seems to be discouraging passengers. Other complaints are that the airport is too big and tiresome, difficult to navigate and lacks adequate transport links to the city center.

The airport handled 52 million passengers in the nine months after it became fully operational in early April last year. The Ataturk Airport, meanwhile, handled 16 million passengers in the first three months of 2019 before its closure. If those passengers, too, had used the Istanbul Airport, the total figure for the year would have been 68 million, the number of passengers that the Ataturk Airport handled in 2018. So there has been no change in the number of passengers thus far, though the Ataturk Airport was shut down on the grounds that its capacity was no longer sufficient. The figure also could be said to mean that the Istanbul Airport fell 22 million passengers short of its 90-million capacity. The larger target, however, is to expand its capacity to 200 million by 2028. How such demand will be generated is anyone’s guess.

The airport was constructed on the build-operate-transfer model, with the project awarded to a consortium close to the AKP. Its construction and operation appear bound to produce burdens on public finances in the future, if not immediately. The contract involves guarantees for the consortium, meaning that the government would pay the difference if the number of departing passengers falls below the figure guaranteed in the contract.

Kadir Samsunlu, the CEO of the contractor company, IGA, said last week that the airport had surpassed the guaranteed number in its first year and the company would pay the government $22.4 million euros ($24.9 million) in fees for the number of passengers.

Under the contract, however, IGA is supposed to also pay rent to the state — more than $22 billion euros ($24.5 billion) over 25 years. It remains unknown whether the company paid any rent last year. While the CEO said nothing on the issue, no one has denied rumors that the government granted the company a postponement on the rent. In any case, the airport is already enjoying government favors and is likely to continue to do so as the government seeks to make the facility sustainable and avoid guarantee liabilities.

Should the airport flop, the financing problems of the project will further grow. IGA’s debt burden of nearly $6 billion euros ($6.7 billion) has grown to an unknown extent due to the big slump of the Turkish lira since last year. Missing the targets would mean grave financing troubles for the company.

Moreover, the facility is supposed to be completed with an “airport city,” for which more than 4,000 hectares (15 square miles) of land have been allocated in surrounding areas. This project, too, will come under risk if the airport underperforms.

Under the strain of accumulating problems, one of the consortium partners, Kolin, has already quit, with others rumored to be considering following suit. Kolin has transferred its stake to another shareholder, the Kalyon group, which also owns the staunchly pro-government Sabah-ATV media group.

In the worst-case scenario, all debt might end up in the public lap, given that the State Airports Administration is the guarantor of the entire loan. Meanwhile, the completion of construction at the airport requires a new investment of 4.5 billion euros ($5 billion), which could also be assumed by Turkish Airlines — that is, the state.