The wall Israel is building in the West Bank is taking a toll on nature and animals. 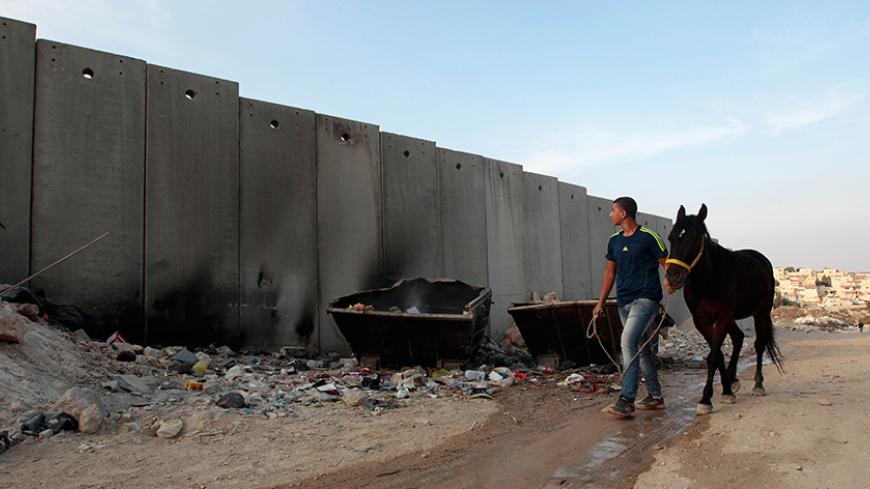 A Palestinian walks with his horse past a section of the controversial Israeli barrier, in Shuafat refugee camp in the West Bank, near Jerusalem, Nov. 21, 2013. - REUTERS/Ammar Awad

RAMALLAH, West Bank — The West Bank barrier project has been condemned by many for its crushing effects on the Palestinian people. Now steps are underway to document its devastation of nature and wildlife as well. The Palestinian Environment Quality Authority and the Ministry of Agriculture plan to prepare and present to the United Nations a comprehensive study on the direct consequences of the wall and its long-term hazardous effects on the environment.

The barrier has led to the destruction of green cover by uprooting hundreds of thousands of carob, olive, almond and palm trees, eradicating rare wild plants, eroding fertile surface soil and endangering the dynamic diversity of the region. Its construction is threatening some animal species with extinction, including wild birds, gazelles, stone hedgehogs, wolves and hyenas, said George Karzam, an environmental expert for Afaq, an environmental magazine. He told Al-Monitor the wall constitutes an obstacle to the preservation of ecosystems and natural attractions, as well as the connectivity between protected areas.

“The wall has deadly effects on the movement of wild animals as a result of the fragmentation of ecosystems between the land occupied in 1948 and the West Bank on the one hand, and the lack of communication among environmental corridors on the other.” The wall, he added, “caused the deterioration of vegetation in the West Bank as a result of the isolation of about 41 square kilometers [16 square miles] of natural forest plantations — or approximately 51% of the total forest areas​​.”

Karzam also pointed out that the barrier was built along the western basin, the richest Palestinian basin, where Israel dug more than 500 wells that are considered part of the so-called Israeli system.

Israel has completed 62% of the barrier, which is expected to go 720 kilometers (447 miles) into the West Bank, according to the UN Office for the Coordination of Humanitarian Affairs in occupied Palestine. The wall has had disastrous effects on Palestinian life, and its repercussions for wildlife continue to worsen. David Mallon, a British antelope expert on the International Union for the Conservation of Nature’s red list, confirmed the Palestine mountain gazelle is considered at risk of extinction. Only 2,000 gazelles have managed to survive the barrier, which reduced their habitat and forced them closer to populated areas, making them more vulnerable to poaching.

Wild animals such as pigs and hyenas also are seen in populated areas, since the wall restricts their movement, said Adalah al-Atira, head of the government-affiliated Palestinian Environment Quality Authority. Atira agrees with other experts that, as the West Bank barrier has taken over large tracts of land, it has damaged wildlife, biodiversity and several environmental sectors such as water and plant life.

Atira told Al-Monitor that the wall's destruction of the Palestinian environment cannot be compensated. Because the wall was built on the west basin, small streams and water torrents that previously fed wild animals have been seized and destroyed. She said efforts are being made to preserve some semblance of balance and biodiversity in wilderness areas.

Many wild deer that were displaced from their natural habitats resorted to sheltering in caves near villages. For the past two years, especially during winter, hunters have “massacred” the deer. Hyenas also are threatened with extinction and, as they are forced closer to villages, they can endanger livestock, according to the Environmental Quality Authority. Sometimes hyenas are killed on sight when they reach public streets and populated areas.​

Imad Atrash, executive director of the Palestine Wildlife Society, told Al-Monitor the number of striped hyenas in Palestine now ranges from 300-500 across the West Bank, and there are fewer than 2,000 wild deer. In addition, “The wall limited [the movement of] large numbers of wild pigs to small areas. This [species] is characterized by a high reproduction rate, which is why citizens now see these species more frequently.”

Atrash warned against the continued disregard and hunting of animals. “If the pace of hunting and killing of animals continues, these animals will disappear in the years to come.” He called on the Palestinian Environment Quality Authority to enact environmental regulations and tighten sanctions on animal poaching.

As for vegetation, according to the Environmental Quality Authority within the Palestinian Ministry of Environmental Affairs, there are about 2,076 species of wild plants in the West Bank and the Gaza Strip, including 90 species threatened with extinction and 636 rare species.

Armed with all this data and more, the Palestinian Environment Quality Authority and the Ministry of Agriculture will develop their report on the wall's direct effects and its future repercussions for the environment. Atira said they hope their study will have an impact on the United Nations, which is studying the issue.

More than 11 years have passed since The Hague issued an advisory opinion on July 7, 2004, demanding that Israel stop working on the wall, demolish what already had been constructed and compensate Palestinians for the damage they suffered. But the wall is still there, and its effects continue to worsen and affect all aspects of life.