Iraq tries to increase the number of its endangered Goitered Gazelles by placing them in reserves, but lack of funding remains a challenge. 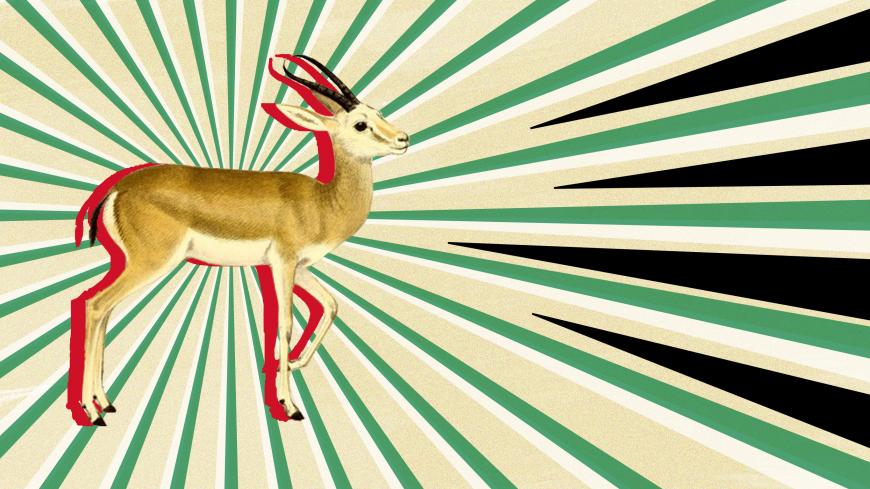 BAGHDAD — A Facebook post last month putting up for sale several gazelles has raised questions on whether the Iraqi authorities are doing enough to protect this endangered species.

The post, put up by Ahmad Ahmad, a user who sells animals online under what looks like a fake name, offered several endangered gazelles. Online sales of rare animals are common in Iraq, where a Facebook page for the sale of Goitered Gazelles originates.

A rare and endangered species globally, the Goitered Gazelle gets its name from an enlargement of the neck and throat in male gazelles during the mating season. They are found in Iraq, Afghanistan, Central Asia and northwest China and Mongolia. According to the International Union for Conservation of Nature’s (IUCN) Red List, which monitors endangered species, the Goitered Gazelle is a vulnerable species whose population has declined by 30% in the last 14 years. IUCN estimates that there are between 42,000 and 49,000 Goitered Gazelles in the world. The main threats to this species are illegal hunting, for meat and to a lesser extent for trophies, and habitat loss due to economic development or conversion to agriculture.

Although the press and social media users’ comments indicate that the gazelles put up for sale are likely coming from the Diyala Reserve for Gazelles in eastern Iraq, near the Iranian border, the reserve officials deny that this is the case.

“The reserve has its own management that does not allow such breaches,” Haidar al-Mandalawi, a member of Mandali Council where the reserve is located, told Al-Monitor. He said that the gazelles on sale are not from the reserve, but hunted in open spaces by specialized hunters who then put them up for sale.

Mandalawi said, “Although the Diyala Reserve is neglected and lacks professional expertise, enough man power and good health services, it has the highest number of gazelles — 110.” He warned that the reserve, despite its importance for the conservation of nature, lacks adequate funding.

Iraq’s Ministry of Agriculture has built several reserves in the country to protect endangered species, but many of them remain in dire need of funding to help protect rare species and help them reproduce. Besides the Diyala Reserve near the Iranian border, there is another Goitered Gazelle reserve in Maysan province in southeastern Iraq, also near the Iranian border. It was established in 2012 and is home to 25 gazelles.

Ali Hassan, one of the supervisors at the reserve, said that the area was famous for its many gazelles in the past, but that they have disappeared over time. He noted, “It is a remote area that nobody visits. Ferocious animals are an imminent threat because they dig into the soil from under the metal fence to get into the reserve.”

Hassan added, “The reserve is managed using primitive techniques. There are no surveillance cameras or experts in animal health or breeding; only guards protect the reserve and feed the gazelles at the same time.”

The problems that Hassan highlighted are not specific to just one reserve. The Samawah Gazelle Reserve in southern Iraq that was built in 2014 over an area of 500 dunams (124 acres) and has about 100 gazelles is plagued with diseases affecting gazelles. They also lack funds.

Shanaga Reserve in Kirkuk, which extends along 2,800 dunams (692 acres) and started out with 25 Goitered Gazelles, succeeded in increasing the number to 80.

Terrorism and violence took its toll on gazelles in the Al-Rataba Reserve in Anbar province also. The Islamic State (IS) invaded one-third of Iraqi territories and stole 7,000 gazelles in 2014 transporting them in trucks to Syria, after the group recoiled with the advancement of Iraqi forces.

The animal-rich prairies of Iraq attract hunters from the Gulf states, and as a result, many animal species have decreased due to illegal hunting.

Amir al-Hassoun, the director general of the Environmental Awareness and Media Department at the Ministry of Health and Environment, told Al-Monitor that human settlement and vegetation contributed largely to the declining biodiversity. He calls for improving the environment, especially in areas that shelter rare species, and enforcing laws that punish those hunting rare species such as the gazelles.

Hassoun also said that trading animals was a result of citizens’ lack of environmental awareness. “The government has been preoccupied with political and security problems since 2003, and the environment was the least of its priorities,” he added. “Future plans include calling on relevant international organizations to help Iraq in developing reserves by investing in them and turning them into profitable touristic and economic projects.”

Parliamentarian Abdul Hadi al-Saadawi agrees with Hassoun in regard to encouraging investment. He calls for “developing reserves to become touristic sites because they are currently not profitable and represent closed cantons.”

Saadawi told Al-Monitor, “The end of the war on IS and Iraq’s recovery from its financial crisis allow support for investment projects that should not be limited to the government. The state should encourage the private sector to embark on this project supporting the environment and the economy.” He said he hoped there will be more private investment in the future.

This investment perspective was translated in a private sector endeavor at the Gazelle Farm in Babil, which was established by investor Hussein al-Shumari and proved successful and profitable, providing protection for the gazelles.

Shumari told Al-Monitor that the “private sector projects established farms to breed gazelles in Babil and other Iraqi provinces,” noting that this would provide much-needed support for the reproduction of endangered species.