Iraq steps up efforts to stop smuggling of rare species

Smuggling rare animal species out of Iraq has become common due to lax enforcement of laws and the country's security situation, but the federal government is making renewed efforts to halt the smuggling. 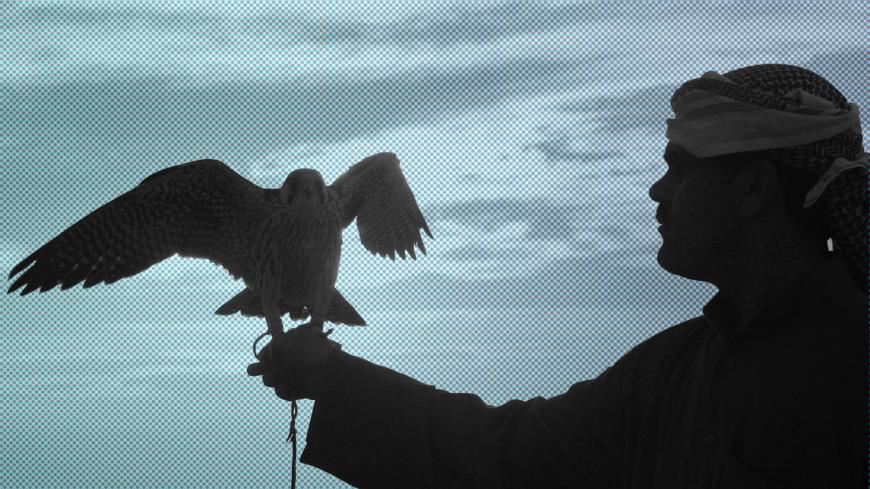 A falcon perches on a Bedouin hunter's arm during a hunt in a desert south of Samawah, Iraq, Nov. 30, 2007. - REUTERS/Mohammed Ameen

Iraq's Ministry of Health and Environment released 20 falcons back into the wild Nov. 17. The falcons had been smuggled earlier in the month to Kuwait, which returned them to Iraq. This incident is but one example of the systematic smuggling of rare birds and animals out of the country, and the authorities are working to better enforce existing laws and adding security measures.

“The lack of surveillance on the vast, open borders as well as the rampant corruption at the ports make such operations both possible and profitable for smugglers and merchants,” an officer in the Iraqi Ministry of Interior told Al-Monitor on condition of anonymity.

Smugglers are encouraged by traders in the Gulf states who pay huge sums of money to purchase rare, ornamental or hunting birds. There's an anecdote circulating that a rare breed of pigeon recently sent bird fanciers in Kuwait into a bidding war, driving the final price for the birds to $33,000.

“Many trade transactions are conducted illegally, away from any environmental or security controls,” Manal al-Muslimawi, a member of the Iraqi parliament's Environment Committee, told Al-Monitor. “The Iraqi laws [are supposed to] protect the environment and its biological diversity, but they are not being enforced."

The falcon incident, Muslimawi said, "is one out of hundreds of smuggling cases of Iraqi birds and rare animals, and the parliamentary committee is aware of that.” She added, “The environmental police in Iraq are not up to the challenge, given the lack of the needed personnel."

Some markets in Baghdad even sell protected species in plain sight.

"Some well-known smugglers are buying rare animal and bird species from the market to selling them through cross-border networks," bird trader Sheikh Ali told Al-Monitor.

"There is a trader who managed last year to get seven rare and desirable hawks from the desert of Ramadi and [offered to sell them to us] for a good price," which he declined. "I subsequently learned that this trader [sold them] to the Gulf traders,” he added.

It's well-known that smugglers are moving Iraqi livestock to neighboring countries. Several operations smuggling sheep and cattle were reported in February in Anbar province. There have also been numerous reports of the Islamic State (IS) smuggling livestock to fund their operations. In June, IS took rugged and bumpy roads to try to sneak stolen thoroughbred Arabian horses from Kirkuk to the border between Diyala and Salahuddin, authorities said. In September, Iraqi military intelligence in Anbar foiled an IS attempt to smuggle out 1,332 livestock of various species.

Abdul Hadi al-Saadawi, a member of parliament's Committee on Health and Environment, told Al-Monitor that smuggling cattle and rare birds and animals has become common. The committee has asked the federal government to issue more stringent laws and tighten security controls, he added. Special security detachments are being dispatched along routes from the desert of Najaf to Basra in the south, near the border with Iran, for the first time since 2003.

The government also is trying to curtail smuggling by restricting the transport of cattle, birds and rare animals from one province to another, he said.

These new measures may have helped security officials arrest Iraqi rare bird hunters in the Samawah desert. Over the past few years, Iraq has lost a great deal of its rare biological wealth because of the turbulent security situation and political developments. Even the Mosul zoo was completely looted when IS controlled the city.

Haider al-Zamily, a veterinarian at Zawraa Park, told Al-Monitor there is a plan to open a center there for wild animal rehabilitation "in a bid to return them to their natural habitat.”

While this project is an important step toward preserving Iraq's environmental diversity, it is necessary to enforce laws that deter smuggling and indiscriminate hunting, prepare programs that increase environmental awareness and provide job opportunities for poor young people who smuggle animals and birds for money.