A general lack of awareness has led to increasing cases of local Iraqi populations randomly killing rare animals they encounter. 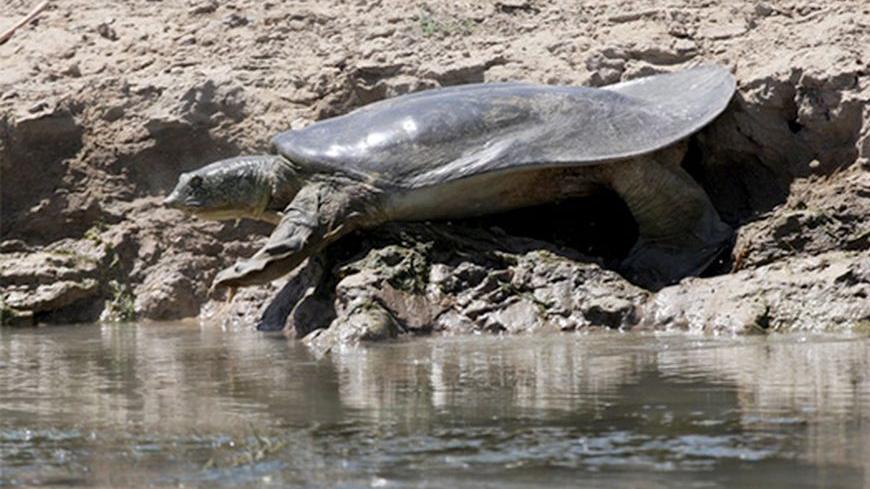 A Euphrates soft-shelled turtle prepares to dive into the water. - Nature Iraq Staff/natureiraq.org

The lack of environmental awareness in Iraq and the absence of institutions that are concerned with the protection of animals, in addition to the weakness of the law, have led to the death of hundreds of living beings, especially rare ones. The use of weapons and modern hunting techniques is common, and the aggressors treat the environment violently.

Early this year, while Zamel al-Issa, a farmer, was wandering through his field on the Hillah River in the center of Babel province, he spotted a big turtle crawling between the shrubs.

In an interview with Al-Monitor, Issa said, as if he were telling a heroic story, “My eyes had never seen such a huge turtle. It crept slowly towards me, but I did not wait long before stabbing it with a metal spear in the back, which I then cracked with the shovel that I use to plough the garden.”

Issa’s behavior was only a spontaneous reaction, since he had never been taught to protect the environment and its rare species in a society where environmental education is rare and institutions that spread this education are almost nonexistent.

Confidently, Issa declared, “Strange animals have no place among us. This is what we have grown accustomed to. We should kill them immediately before we become their victims. They are harmful or possessed.”

By the same logic, some young men from city of Al-Diwaniya claimed that they had been confused by the disappearance of their companions in the river, which went on for a while, until crocodiles were found in an incident that went viral in 2011. It was assumed that the animals had devoured the men who had disappeared, and people went out with sharp tools, mattocks and rifles to kill the creatures.

It has become popular to kill rare animals in Iraq, while protecting them to recognize their genus and conduct studies on them is the exception. There is complete disregard for applicable laws, including the Iraqi Wildlife Protection Law, which aims to protect wildlife, considering it to be “national heritage.” Moreover, the law specifies hunting regions, determines the specific measures required to obtain a hunting license and specifies the animals that can be hunted and those that can’t, in addition to determining the hunting seasons.

In this regard, biology teacher and environmental activist Ahmad Obeid told Al-Monitor, “Citizens in Iraq, especially in rural areas, consider any strange creature an enemy. So, they quickly get rid of it, as if their action is part of a battle against it.”

“In other cases, rare birds and animals constitute a source of livelihood through their sale in the markets, without taking into consideration the environmental conditions and the pertinent laws,” he continued.

In 2012, the inhabitants of Hashimiya, south of Babel, found a strange animal that looked like a big fish but has the shell of a turtle. They stabbed it to death with sharp tools within moments.

Obeid, who saw photos taken on cell phones of the animal before it was killed and cut into pieces, said, “The animal was nothing but a rare big fish with thick scales that lives in the ocean, carried by the current to the river.”

At the end of 2012, an image taken by a cell phone showed the photo of a boar on the rural southern road of Hillah. Locals gathered around it, especially the youth, after some men had killed it and removed its tongue, teeth and organs to use in sorcery.

People classify most animals that they had never seen before as “strange creatures”, but according to Obeid, this is not true.

“They are merely rare creatures that often live far from human populations,” he said.

The appearance of these animals is often accompanied by interpretations and folk mysteries. Some people even link them to politics and conspiracies.

In Al-Diwaniya, Saad al-Maliki and his friend took a photo with around 20 partridges that he shot with a shotgun. He had grown accustomed to hunting regularly in this wide region where the taste of the desert and the smell of the waters in Hawr Dalmaj intermingle.

Speaking to Al-Monitor, Maliki admitted, “I do not need to hunt this much, but it’s a hobby. I know it harms the environment and animal diversity, but I cannot refrain from hunting.”

Moreover, Maliki hunts any animals and birds that he spots. He said, “Around two months ago I killed a rare wild cat dubbed ‘Karta,’ which is the subject of many folk legends.”

However, some people seek to hunt animals and kill birds to make profit. Hunter Abou Amin usually sets bait in the desert and prepares his rifle to hunt the biggest number of birds to sell or eat.

Another hunter, Karim al-Zabidi, said, “I set out to hunt at dawn and I target any moving organism in front of me, whether it is a bird or animal.”

“The strange animals and birds that do not have much worth in the market are killed immediately,” he told Al-Monitor.

Last year in Rumetha city in Al-Muthanna province, people took their rifles and sharp tools when they heard about strange animals attacking the region. Later, cows, sheep and donkeys with torn insides were found.

Raad Samawi, a sociologist from Rumetha, told Al-Monitor, “Most people spread the word about the presence of unfamiliar animals. Perhaps it is a supernatural phenomenon that takes over the thoughts of some people and they spread it around.”

“Specialists and people familiar with the region for decades confirm that there are no weird phenomena going on. As for rare animals, they are national heritage, but many people do not know how to deal with them and ignore their true value,” added Samawi.

Biology academic Amer Abdallah told Al-Monitor, “The role of scientific institutions is absent or restricted to theoretical teaching. They lack field plans, and they have weak or absent environmental awareness, not to mention that ignorance and supernatural interpretations for natural phenomena are wide-spread. Consequently, animals which share life with us in this part of the world are not treated fairly.”