Once common only in rural areas, the practice of murdering women and other Iraqis for what some perceive as immoral acts has made its way into the country’s urban centers. 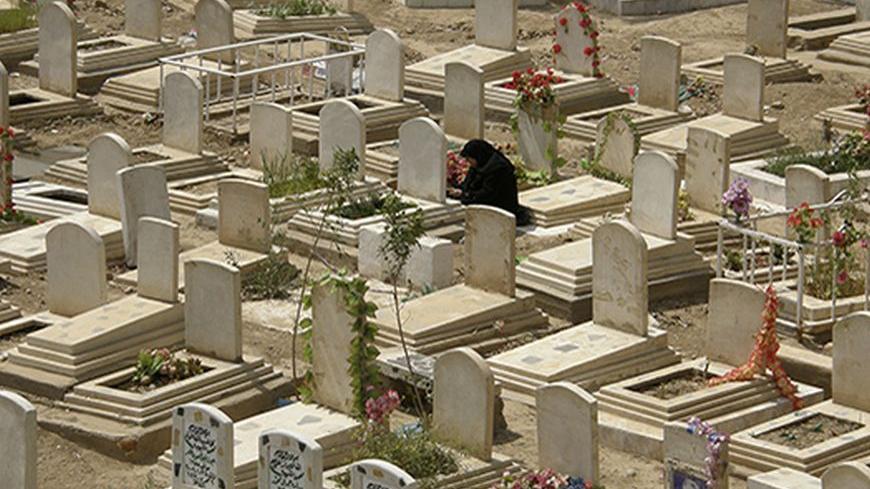 A woman grieves at a cemetery in Baghdad's Azamiyah neighborhood, April 2, 2009. - REUTERS/Ahmed Malik

Although Ahmad is in prison, he considers what happened an “honor.” Friends and relatives see him as a courageous man who washed away the shame of a “deviant” girl who strayed from religious and tribal values.

In an interview with Al-Monitor, social worker Qassem Hussein says honor crimes are still legally applicable to many girls who declare their “forbidden” feelings for foreign men, not only in Iraq, but also in other Arab and Muslim countries.

However, what is exceptional about this crime in Iraq is that it has become more deeply rooted than ever, although the opposite should have happened, given social and cultural developments and media openness, as Qassem notes.

He adds that the commonality between victims — who number in the dozens yearly — in Iraq and other countries is the barbaric ways they are killed to “settle” the matter. They are strangled, stabbed with a knife or sword, shot or set on fire. Then, the authorities are notified that the victim has committed suicide.

Feminist activist Maeda Abdel Hussein told Al-Monitor, “The most dangerous aspect of the phenomenon is its religious, social and legal legitimacy.”

She added, “The secrecy of the crimes makes them go unseen, thus contributing to their continuous occurrence as they do not stir public uproar. The perpetrator commits his crime slowly, with encouragement from the people concerned who fear for their honor and the reputation of their tribe, pushing the person to commit murder.”

“The female victim is not thrown out on the sidewalk, like in some Arab and Muslim countries. Instead, she often remains a dead body where the crime happened, while the perpetrator hands himself in to the authorities,” Hussein noted.

In Hillah, in the center of Babil province, there is another example of this reckless crime. After Haifa’s younger brother supposedly killed her by suffocating her with a pillow while she lay sleeping, rumors circulated that the real perpetrator was her father. The manipulation of the story was an attempt to get the weakest legal punishment, with the murderer a 15-year-old minor.

In general, the mothers of the victims also suffer from these harsh crimes. Haifa’s mother told Al-Monitor, “The incident shook the family to its core and divided it, because the sight of Haifa’s corpse on her bed was so disturbing, no matter how still she was. Such a sight sends shock waves throughout the community, leaving people wondering how long these sorts of murders will go on.”

The problematic relationship between honor and blood in Iraq does not end with the murder of girls. In Hamza, south of Diwaniya, after being caught in a relationship with a girl, Jemaa Kazem was slaughtered with a knife and his penis was cut off. His body was dumped on the banks of a river not far from a security checkpoint.

None of this is shocking, according to attorney Ibtisam Farhan. She tells Al-Monitor, “Even on the wedding night, blood is a symbol of honor.”

“Bloodshed is not limited to young girls in Iraq, but also involves widows and married women who are suspected of having forbidden sexual affairs,” Farhan adds.

She goes on to say: “The murderer never regrets his act. A man was released from jail last week, seven years after having committed murder. His family and tribe honored him, even though he slaughtered his sister.”

Farhan states that what is worse, “The victim’s grave in the Al-Salam cemetery in Najaf is not visited by anyone, except for the bereaved mother, who visits her daughter’s grave in complete secrecy, shedding tears and mourning alone.”

The toughest of those cases involves the girl being murdered, and then her parents claim she ran away. However, it later turns out that she was buried along with her secret. Worse still, even in this modern day and age, sometimes girls are stoned for reasons related to honor, religion or traditions.

Ibtisam says, “The Iraqi laws let down all those who demand the deterrence of this phenomenon, since they provide coverage for the commitment of the crimes and seem to legalize them."

Women who are victims of rape, despite the horrendous harm they experience, are isolated and deemed “undignified.” Their families wash their hands of them and they are looked down upon their whole lives.

What is significant here is the growing number of honor crimes, despite their having been expected to decrease as a result of awareness and educational policies and the expanding school system. The reasons behind this relapse, according to Qassem, go back to “the wars that prevented normal social progress, thus contributing to the spread of the phenomenon from countryside to cities. This is an indication of the regression of urbanism in favor of provincialism.”