Israel’s separation wall on the border with the Gaza Strip is undermining wildlife biodiversity by preventing access of any wild animals. 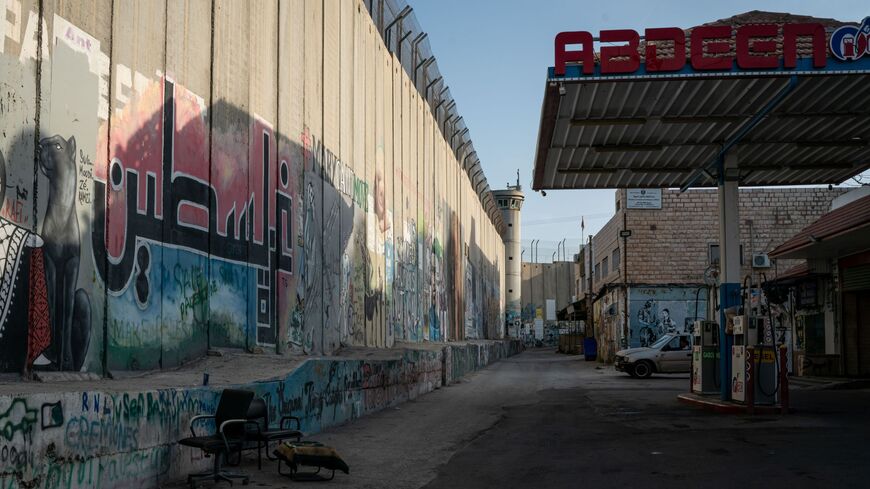 A Palestinian man sits inside his car at a petrol station next to the Israeli wall on May 17, 2021 in Bethlehem, West Bank. - Samar Hazboun/Getty Images

GAZA CITY, Gaza Strip  — The wall that Israel built alongside its border with the Gaza Strip is not only affecting human life, but also the native biodiversity.

The barrier is preventing wild animals, such as deer, foxes and wolves among others, from crossing into the besieged enclave.

The wall has also undermined the aquifer, by cutting off groundwater reaching the Gaza Strip, and polluting the existing supply, according to experts who spoke to Al-Monitor.

In December 2021, Israel announced the completion of a sensor-equipped underground wall on the Gaza border, spanning over 65 kilometers with an above-ground height of six meters. The wall, which also includes an above-ground fence, paved paths and trenches, took about three and half years to be completed.

The wall also includes a naval barrier equipped with technology to detect infiltration by sea, a remote-controlled weapons system and an array of radars and cameras, and command and control rooms.

Abdel Fattah Abed Rabbo, associate professor of environmental science at the Islamic University of Gaza, told Al-Monitor that the Israeli wall has devastating environmental effects, as it prevents the natural biological exchange above and below the ground.

“The wall hinders natural movement of wild animals and reptiles. It also blocks the natural movement of microorganisms underground that restore soil fertility and boost its vitality and ability for cultivation. The concrete stretches of the wall will cause these organisms to disappear on the Gazan side,” he added.

Wildlife in the Gaza Strip faces great perils. Especially in the eastern areas near the border, Rabbo said, animals used to travel freely from Israel to Gaza, but the wall has blocked access, especially for mammals, due to their relatively large size. He mentioned foxes, wolves, hares, deer, jackals, Egyptian mongooses, jungle cats, and porcupines.

The construction of any separation wall in any part of the world cuts animal movement, he noted. “This separation undermines the ecological and biological balance and animal diversity in the Gaza Strip, where the numbers and types of mammals, reptiles and wild birds are already plummeting due to the urban sprawl and the shrinking agricultural areas. This is not to mention the small surface area of the enclave compared to its population density. The absence of these animals will certainly affect the ecosystem.”

Attia al-Bursh, head of the Laboratory and Standards Department at the Water and Environment Quality Authority in Gaza, also warned the wall would bring wildlife to the brink of local extinction.

“This loss should be compensated through the migration of animals in search of food and shelter from the lands of the West Bank to the Gaza Strip,” he told Al-Monitor.

He explained that in the last war on the Gaza Strip, Israel bombed agricultural areas and empty lands, killing many animals that had found refuge in those areas.

Bursh indicated that the delicate balance in the wild affects all aspects of life, and its disruption is harmful. “There is an almost complete extinction of some types of invasive birds that subsist on some rodents that damage agricultural crops, destroy the nests of birds and carry diseases that may be transmitted to humans. In the coming period, we will start witnessing more and more the adverse effects of the wall on our ecosystem.”

Importing animals to restore ecological balance is not an option, Bursh said, because the government's priorities are providing safe water to the population.

Water is another problem the wall has worsened. “The wall, extending above and below the surface of the ground, will prevent the flow of water toward the enclave, depriving it of an important source of water estimated at millions of cubic meters,” said Mazen al-Banna, the director general of the Water Resources Unit at the Water and Environment Quality Authority in Gaza. “The wall will prevent us from benefiting from any rainfall outside the borders of the Gaza Strip, thus lowering the groundwater level."

The wall is also polluting the existing groundwater, Banna said, because "the machines used to build it disturbed the soil and its cohesion, which allows pollutants on the surface to penetrate the groundwater. This act by Israel is contrary to international law that sets standards for managing transboundary shared water resources.”

Banna explained that water in the Gaza Strip is below the standards of the World Health Organization. All wells have high levels of salinity, chloride and nitrate elements, which poses a threat to the health of Palestinian citizens.

The spokesperson for the Ministry of Agriculture in the Gaza Strip, Adham al-Basiouni, denounced all the arbitrary measures taken by Israel on the border.

He told Al-Monitor, “The Israeli measures aim to undermine the agricultural sector since the lands in the eastern region are fertile, with low-salinity groundwater compared with the rest of the areas. [By building this wall], Israel is preventing cultivation in the areas near the border.”

Basiouni  warned the wall will have a serious impact on the agricultural soil of the Gaza Strip, not only because of how deep it penetrates the ground but also since the vehicles that rammed the land left behind materials harmful to the soil.