The Hamas-affiliated Water and Environmental Quality Authority to ban the digging of wells without a license, as many Gazans suffer from a lack of potable water. 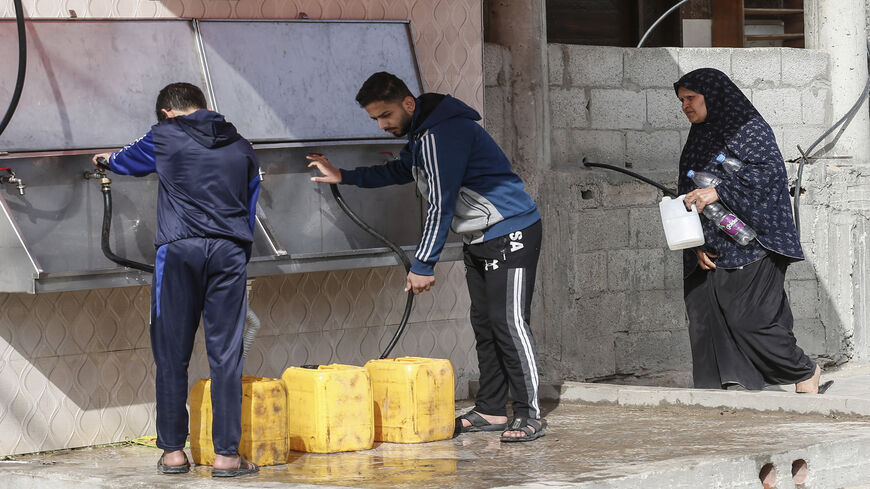 GAZA CITY, Gaza Strip — Palestinians living in the border areas of the Gaza Strip rely on wells to secure drinking water and to irrigate their crops, as the Hamas-run local municipalities fail to assume their responsibility to supply water to these areas.

In an Aug. 25 statement, the Hamas-affiliated Water and Environment Quality Authority announced a ban against the digging of water wells in all Gaza governorates, under the pretext of fighting a severe decline in groundwater levels and quality due to over-exploitation of the aquifer into which the wells are drilled.

The authority said that its decision is based on the Palestinian Water Law No. 3 of 2002, which prohibits unlicensed drilling or exploration to obtain water, whether for public or private use.

It stated that the violators are subject to legal accountability and penalties as stipulated by the Water Law.

The authority further called on all citizens who already drilled water wells to rectify their legal status in the next three months by obtaining a license to avoid legal accountability.

Gazans, however, believe this ban is only designed to obtain money in exchange for issuing licenses for drilling wells.

Nabil Sultan, a resident of al-Ghawl border area in the northern Gaza Strip, told Al-Monitor, “I have been living in this area for seven years. The houses are not connected to the water supply or sewage network [of the local municipality], so we mainly rely on drilling wells to obtain water.”

Sultan was shocked when the ban was announced, saying, “The decision would mean that people will die of dehydration.”

Rajab al-Tayeb, a farmer who owns three dunams (0.74 acres) of land in the border area to the east of Gaza City, relies mainly on wells to irrigate his crops.

He told Al-Monitor that the Water and Environment Quality Authority required him to pay 2,000 Jordanian dinars ($3,000) in order to obtain a license to drill wells for irrigation purposes.

Even in residential areas where the municipalities supply water to the houses, the residents drill wells to obtain water due to the recurrent power outages, which often exceed 12 hours per day and subsequently prevent access of municipal water.

Khamis Mortaja, a resident of an apartment building in al-Rimal neighborhood in central Gaza City, told Al-Monitor, “The fact that we do not always have access to municipal water and the decision to ban digging wells will leave us with one option, which is to purchase water from private local water companies at a very high cost.”

The deputy head of the Palestinian Water Authority, Mazen al-Banna, told Al-Monitor that there are 10,000 water wells in the Gaza Strip, including 300 wells for the municipalities, 2,700 wells for the agricultural sector and 7,000 private wells that the citizens drilled without obtaining a permit.

Commenting on the water sources in Gaza, Banna said, “There are three sources of water in Gaza: 92% of the water is secured from the aquifer, 6% is purchased from Israel and 2% through sea water desalination."

The Gaza Strip has been suffering a major water crisis for decades, according to Banna, due to the continuous depletion of the underground aquifer that is unsuitable for drinking, the random drilling of wells, poor foreign funding for water and desalination projects, and the citizen’s inability to pay municipal water bills due to the difficult economic conditions in the enclave.

Banna explained that more than 97% of groundwater wells are not in compliance with the World Health Organization water salinity standards for drinking water.

Banna pointed to an annual groundwater deficit estimated at 120 to 130 million cubic meters. This prompted the Palestinian Water Authority to reduce the per capita share of residential water in the Gaza Strip to no more than 85 liters (22 gallons) per day, which is a small share compared with the minimum international standard that is estimated at 100-150 liters (26-40 gallons) per person per day.

He added that the difficult economic conditions in Gaza prevent the citizens from paying their water and sewage bills, which has affected the service provided by the municipalities and their ability to regularly maintain water facilities.

Ahmed Hilles, director of the National Institute for Environment and Development in Gaza City, told Al-Monitor that the random drilling of wells is one of the most significant threats to the general water situation in the coastal enclave.

He explained that the ongoing drilling of water wells caused sea water intrusion in fresh water in the aquifer, which increased water salinity and caused the water to become unfit for drinking.

Hilles called on the local authorities in the Gaza Strip not only to prevent the drilling of new wells, but also to monitor the wells that were dug before the ban was announced and to demolish most of them. He stressed the need that the municipalities supply the citizens with water.

Banna believes the best solution to ease the water crisis in the Gaza Strip is to establish seawater desalination projects, which will reduce citizens’ reliance on the aquifer. He called on the international community to provide financial support for the completion of such projects.