How long can Gaza survive with no water?

A water shortage has led citizens to dig expensive water wells to meet their basic needs despite the dangerous impact of over-extraction on the Gaza Strip aquifer. 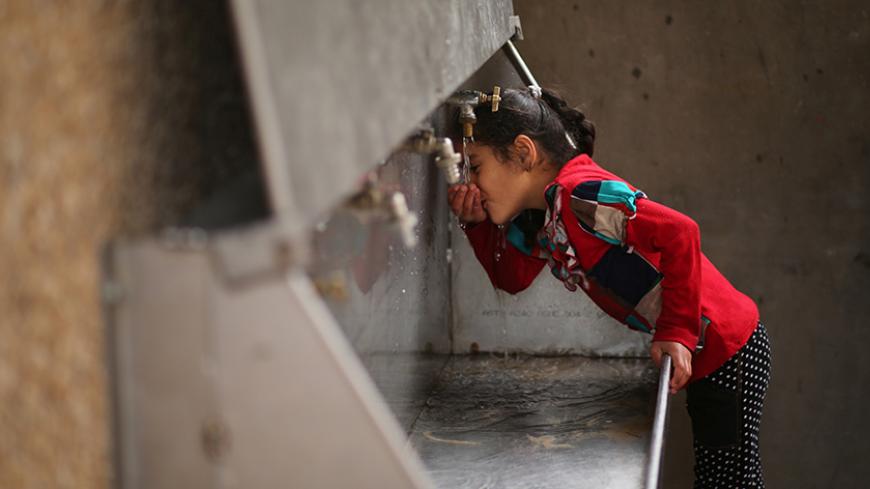 A Palestinian girl drinks water from a public tap in the Jabaliya refugee camp in the northern Gaza Strip, Jan. 24, 2017. - REUTERS/Mohammed Salem

At the request of Palestinian Authority President Mahmoud Abbas, Israel reduced its power supply to Gaza on June 19 from 120 megawatts to 48 megawatts, causing the current water crises.

Omar Hamid, the head of a family of nine, told Al-Monitor, “The municipality is delivering water to the citizens’ homes for only two hours every two or three days. This is not sufficient to meet a household’s minimum basic water needs.”

He said, “There’s no electricity to operate the water pumps and fill our water tanks. Gaza has been living with barely four hours of power supply a day. This scarce supply of electricity often does not coincide with the supply hours of water pumped from the various municipality wells to the citizens’ homes.”

To secure her water needs without having to pay this high price, Hayat al-Najar, a housewife and mother of six, stores municipal water during supply hours, using everything suitable for this purpose such as bathtubs, empty bottles of juice and other utensils. She uses her stored water to carry out household tasks such as cleaning, washing clothes and doing the dishes.

She told Al-Monitor, “Our water supply barely covers our basic needs. My children need to take daily showers in this hot summer, but I can only afford to give them one shower per week to save water.”

In order to have access to water, citizens, especially owners of residential buildings, started digging unlicensed wells to pump out water from the already stressed aquifer, Mazen al-Banna, the vice president of the Palestinian Water Authority in the Gaza Strip, told Al-Monitor.

Banna said there are around 10,000 wells across the Gaza Strip, including 300 municipal wells, 2,700 agricultural wells and 7,000 unlicensed wells.

It costs about $2,000 to dig a private well. Maher Abu Juba, a construction worker who digs wells for citizens, told Al-Monitor, “Despite this high cost, citizens are increasingly relying on private wells by sharing their costs among neighbors as the only means to overcome the chronic water crisis.”

He said that three years ago, the water authority prevented citizens from drilling unlicensed wells in a bid to preserve underground reserves.

The water authority "would fill wells dug by the citizens, but today it is turning a blind eye to the drilling of wells and even licensing some of them in return for 5,000 shekels [about $1,400] in light of the continued electricity crisis,” Banna said.

Ahmed Hillis, the director of the Environmental Awareness Department at the Palestinian Environment Quality Authority, told Al-Monitor, “Unlicensed private wells have disastrous consequences on Gaza’s aquifer. Most of these wells are not supervised or controlled by specialized authorities. Groundwater stored in the aquifer is being drained uncontrollably.”

He said that “over-extraction of water from the aquifer through wells has led to seawater intrusion, which in turn led to a high salinity of Gaza’s underground water, 97% of which is not suitable for drinking.”

Hillis blamed the local authorities in Gaza for granting licenses to dig water wells since 2014 without taking into consideration their negative impact on the underground water stock.

According to Banna, the best solution to the water crisis is to on the one hand solve the electricity crisis and on the other to set up more projects to desalinate seawater for human use such as the European Union-funded seawater desalination plant inaugurated in January in the southern Gaza Strip. The plant provides water to 75,000 people.