Gaza authorities are establishing water desalination plants to meet the demands of the increasing population. 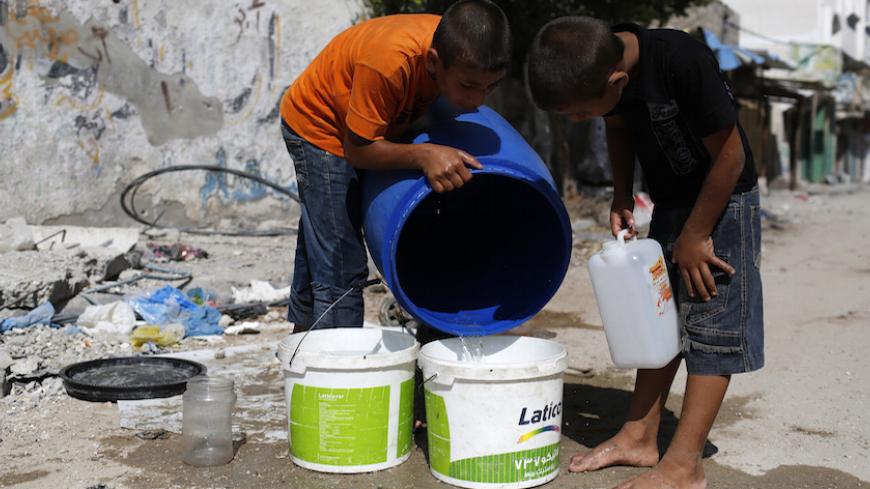 Palestinians youths who fled their neighborhood during the Israeli offensive fetch water from a container after returning to their damaged home in the Beit Hanoun area during a 72-hour cease-fire, Gaza City, Aug. 11, 2014. - REUTERS/Siegfried Modola

GAZA CITY, Gaza Strip — Fethiya Deeb lives in al-Shati refugee camp west of Gaza City and complains about the high salinity of the water that comes to her home from the wells, which are run by the Gaza City municipality. Deeb told Al-Monitor that she and her 17-member family "need a large amount of water on a daily basis. All we receive is salty water that is similar to seawater. We cannot use it for a lot of things. So we are forced to buy our potable water."

Gaza Strip residents suffer from poor quality of household water. Mazen al-Banna, an engineer and vice president of the Palestinian Water Authority in the Gaza Strip, said Gaza's water situation is difficult due to limited water sources and the small land area of Gaza, about 365 square kilometers (141 square miles). Gaza represents less than 1.4% of the area of ​​Palestine, but is home to 2 million people, or 17% of the Palestinian population.

“Many sectors in Gaza, including water, land, agriculture, air and other environmental elements, are being drained," Banna told Al-Monitor. "The people’s consumption is large, and the size of the population does not match what is available from these natural elements and resources.”

Aquifers are Gaza's primary water source, according to Banna, and provide for 98% of public consumption. “The second source of water is the Israeli national water company, known as Mekorot, which provides the Gaza Strip with 5 million cubic meters per year, paid for by the Palestinian Authority," Banna said. "This amount reaches the eastern areas of Khan Yunis and the central areas, as aquifers in some of these areas either don’t exist or are salty, and thus not suitable for direct use.”

Gaza's limited sources of water and the pollution of available sources have led to a decrease in the daily water allotments provided to Gaza residents. Ahmed Hillis, a water sector researcher, said individual Gaza residents are receiving less than the amount recommended by the World Health Organization to remain healthy.

“This severe shortage has steadily worsened over the past few years as a result of the increasing population [and not] seriously developing the water and sanitation sectors," Hillis said. "[This] has caused another major problem: deterioration in the [water] quality, as seawater is entering the aquifers as a result of aquifers being overdrawn. The Gaza Strip has more than 6,000 wells, most of which are unlicensed. … The aquifers have been contaminated by the entry of wastewater as a result of the infrastructure being worn out or destroyed during the wars, the absence of comprehensive development, the citizens digging soakwells and many farmers excessively using chemicals to fertilize the soil or to [exterminate] agricultural pests. [The chemicals] end up seeping into the aquifers.”

Water pollution and aquifer depletion have made potable water scarce in the Gaza Strip.

Munther Shiblak, general director of the Coastal Municipalities Water Utility, said that 97% of Gaza’s water is unfit for human consumption and that aquifers produce no more than 55 million cubic meters per year. “Gaza needs an estimated 180 million cubic meters [146,000 acre-feet] a year for domestic and agricultural uses," he said. "The annual deficit is about 100 million cubic meters. The lack of water in the aquifers is causing a phenomenon whereby seawater seeps into the usable aquifer water and increases the water’s salinity. The wells near the coast are witnessing a significant rise in their chloride content — about 1,500 milligrams per liter in some cases. It should not exceed 250 milligrams per liter.”

Shiblak said that untreated sewage and the improper use of pesticides are major causes of increased pollution. “The nitrate level must be between 50 to 70 milligrams per liter according to international standards. But in the Gaza Strip, it reaches five times this level,” he said.

The Coastal Municipalities Water Utility, according to Shiblak, is responsible for finding water sources for Gaza’s population and is currently trying to find alternative water sources. “Seawater desalination is being considered," he said. "A plant for this purpose was established in 2003 to supply the population in the central area of ​​the Gaza Strip, funded by the Austrian Development Cooperation. [The plant’s] production capacity expanded from 600 to 2,600 cubic meters a day at the beginning of 2013 following a grant from the Islamic Development Bank. We are looking for additional funding to reach a production capacity of 5,000 cubic meters a day.”

A number of seawater desalination projects are in the works for several towns in the Gaza Strip and are expected to be functioning next year to serve hundreds of thousands of citizens. But, according to Shiblak, these projects will be held hostage to the general political and living conditions.

“Not all projects will be completed given the current political situation and power outages. Power is a key factor for the operation of these plants,” he said.

Gaza's options for potable water remain limited given the significant deterioration in its water situation. New options for water sources are subject to several factors, including international funding, internal politics and whether the water utility is active or not.